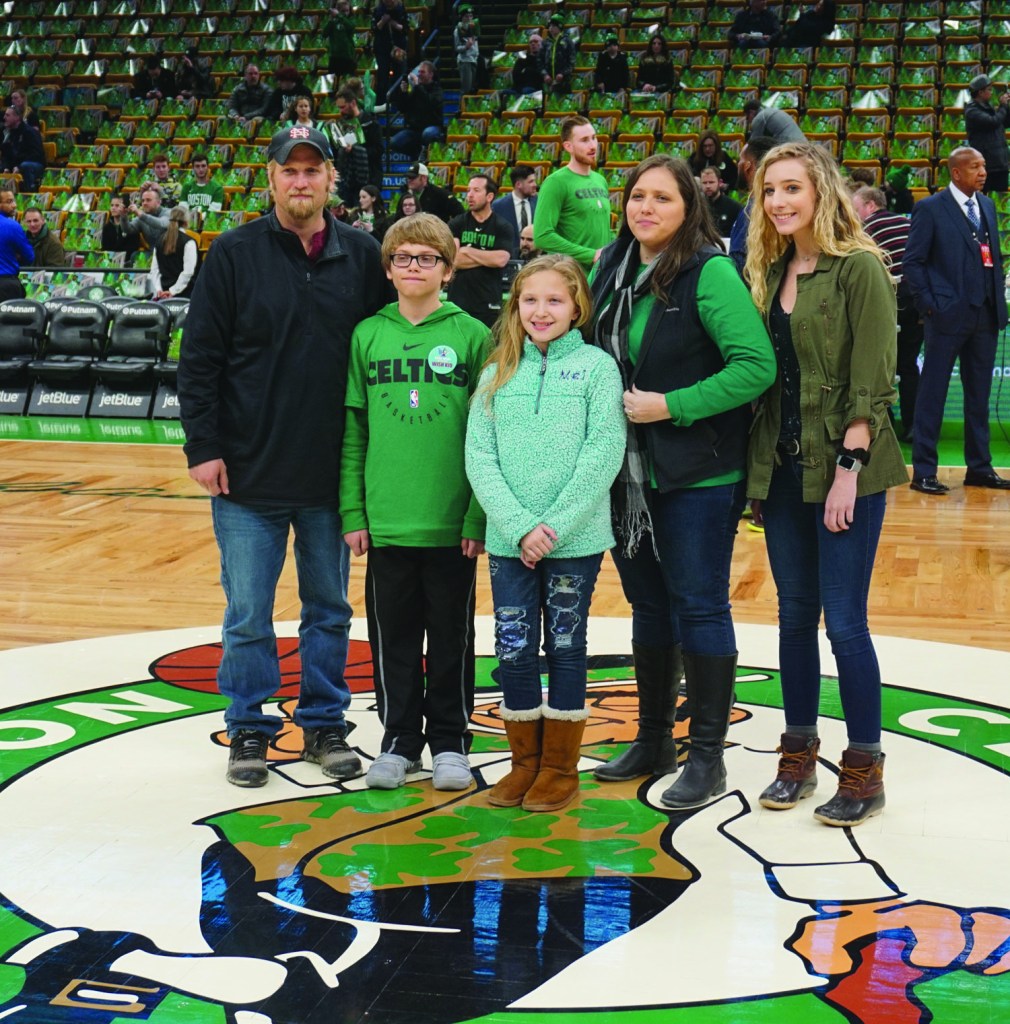 Landon Almond, second from left, is surround by his family — dad Shane, sister Mellinee, mom Amy and sister Madison — at centercourt of a Celtics’ game.

Those with the condition, which affects around 200,000 Americans under the age of 20, must manage the disease with insulin therapy, diet, exercise and constant monitoring of blood sugar levels. And since there is no prevention or cure, Landon became one of millions worldwide whose lives revolved around managing the disorder.

Eight years later, as a seventh grader, Landon became “extremely sick,” according to his mother Amy.

“He spent 10 days in the hospital while doctors worked to find out what was wrong,” she said.

The diagnosis delivered a second blow to Landon and his family, as he was revealed to have Addison’s Disease, a rare disorder of the endocrine system in which the adrenal glands do not produce enough steroid hormones.

Addison’s, in addition to Landon’s diabetes, created problems in balancing treatments for each, as well as intensifying the effects of common ailments.

“Because of the two diseases, ordinary sicknesses that would be relatively minor for other youngsters, like a stomach bug, for example, can put Landon in the hospital,” said Amy.

As a result, the last two years have resulted in Landon remaining home from school during cold and flu season (December, January and February), while receiving school assignments and submitting classwork through the Stanly County Schools homebound student program.

In the meantime, medical professionals working with Landon at Jeff Gordon Children’s Hospital saw a young man who, despite health setbacks, wanted to experience all the things other students of his age enjoyed. One of these was sports — basketball in particular.

As a result, Landon’s doctors and caregivers nominated him to the Kids Wish Network, a Florida-based charity which, according to its website, “grants wishes to children ages 3 to 18 who are battling life-threatening illnesses.”

Soon afterwards, representatives of the organization were in touch with Amy and her husband, Shane.

“We were honored and excited when we found out,” she said, “and they asked us to talk to Landon to find out some wishes that he would like to have granted. It was a very hard question to ask.”

“There were lots of things I could have wished for. But after I thought about it, I’ve always liked the (Boston) Celtics,” he said, “plus I thought traveling somewhere would be nice, as long as my whole family could go. On top of that, Kyrie Irving (former Duke star and current Celtics guard) is my favorite player, and I wanted to meet him.”

Armed with that information, Amy relayed Landon’s thoughts to the Kids Wish Network staff, who assembled a tremendous agenda, starting with a reveal party.

“They (Kids Wish Network) were amazing,” Amy said. “They took care of every detail, starting with the reveal party, and although they weren’t able to come here and handle it in person, they were virtually present by Facetime.” 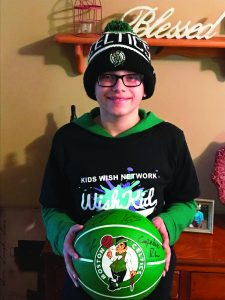 Photo by TOBY THORPE
While he continues to fight juvenile diabetes and Addison’s Disease, Landon Almond had a little fun recently when he and his family traveled to Boston. In addition to seeing a Celtics’ victory, he walked away with this autographed basketball.

At the party the Almonds were informed of what was to come — a trip to Boston for the whole family — Landon, Amy and Shane, and sisters Madison and Mellinee.

In addition to having court side seats where they would see the NBA’s Celtics take on the Memphis Grizzlies, Landon, as an honored guest, would be on the court during pre-game shoot-around, as well as have an opportunity to meet the players. And during non-basketball time the family would enjoy seeing the historic city.

After flying out Jan. 17, the family arrived in Boston and was greeted at the Boston Park Plaza Hotel by manager Shane McWeeny.

“He (McWeeny) and the hotel staff were great,” said Amy, noting that from arrival to departure the family enjoyed outstanding hospitality, including limousine service to and from the game, restaurants and points of interest.

“One of the restaurants we visited was Union Oyster House,” said Amy, noting the family was seated at the John F. Kennedy Table, where the former president (who, ironically, also had Addison’s Disease) always sat on his visits to the restaurant.

But the central event of the weekend was the basketball game, at which Landon, as a special guest of the Celtics, was welcomed by the players, presented an autographed basketball and served as a ball boy during the pre-game shoot-around, feeding the ball to the players and rebounding, as well as getting to take a few shots himself.

“I almost hit Jayson Tatum with the ball once,” he said.

“The Celtics fans are a different breed,” said Amy. “The place was sold out — not an empty seat anywhere — and the team representatives told us it’s that way all the time. They support their team no matter what.”

Upon arriving home just ahead of a snowstorm, the Almonds found themselves back to Stanly County life, but richer for the Boston experience.

“They couldn’t have done anything that would have been any better,” said Amy, who said “everyone saw Landon for being Landon. It was all about him, without emphasizing his health situation.”

As winter turns to spring, Landon looks to get back into the classroom and student life at North Stanly High, where he is a freshman, with hopes of ditching the homebound instruction in future years and eventually attending college.

“We are grateful for the homebound instruction,” said Amy, “but we hope to steer away from it in the future if Landon’s health will allow it. He needs the in-school experience.”

Landon and Amy cited a number of people who have supported the family during the trials of dealing with diabetes and Addison’s.

“We couldn’t have made it without our friends and extended family,” said Amy. “Shane works swing shifts at Corning, so during some of Landon’s hospital stays (some as long as 15 days), our friends and family have helped with getting Mellinee and Madison to school. Plus, Suzette Walters (school nurse) has been a great help by staying on top of Landon’s health status at school, and has kept us informed. And Landon’s friends from North Stanly have lifted him up and encouraged him on social media through it all.”