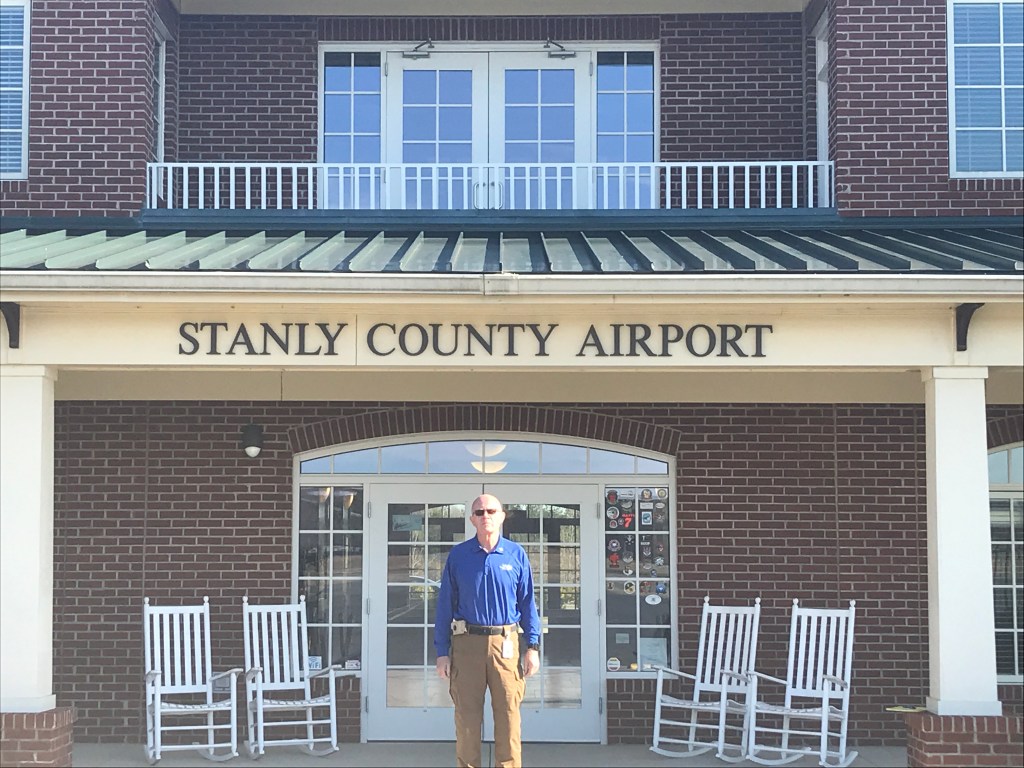 Stanly County Airport director Ken Swaringen outside of the airport.

The Stanly County Airport will soon be expanding and strengthening much of its infrastructure in preparation for Boeing C-17 Globemaster aircrafts which will fly to the airport from the Charlotte Air National Guard’s 145th Airlift Wing at Charlotte Douglass International Airport.

Col. Bryony Terrell, commander of the 145th Airlift Wing, spoke during a recent Albemarle Rotary Club meeting that the Stanly County Airport infrastructure projects are estimated at around $131 million over four phases.

“The Stanly County Airport is a significant economic driver for our county,” said Andy Lucas, Stanly County Manager. “The relationship the County has with the NC Air National Guard is a win-win for both organizations.”

The phases will include expanding and strengthening the runways to better handle the C-17s.

Ken Swaringen, director of the Stanly County Airport, agreed with the financial estimate but said that the number was definitely just a “ballpark estimate” and could fluctuate.

The 145th Airlift Wing has flown the Lockheed C-130 Hercules aircraft for years and a lot of what was done at the Stanly Airport went into developing a training area for the C-130s to practice touch-and-gos, cargo drops and full-stop tactical landings on the assault strip, said Swaringen. Many of these improvements to the airport were made 20 years ago.

Currently, C-17s landing at Stanly have to meet weight restrictions and are not able to land on the runway if the temperature is too hot.

“We can take a C-17, but it’s not optimum where we are right now,” Swaringen said.

He also said that the assault strip will need to be widened along with resurfacing the taxiways and runways.

These expansions will allow the C-17s to perform a multitude of training activities at the airport including assault landings, touch-and-gos, full stops, combat offloads and backing the aircraft, Swaringen said.

C-17s will fly from Charlotte to Stanly rather than North Field, S.C. (where the training also takes place) which will save fuel.

The U.S. Army is scheduled to perform a series of pavement strength testing on both runways in May and local contractors from Charlotte will come to the airport in the next few months to start an environmental assessment, Swaringen said. The assessment will include examining the noise around the airport and local wildlife habitat among other things to make sure the changes are good for the environment.

Stanly County Airport will have a better view of its needed expansions after the pavement strengthening test and the environmental assessment, Swaringen said.

The expansion will take place in four phases.

The first phase involves the environmental assessment and the pavement testing along with completing a new high-speed turnaround and remarking the main runway so it can be used as an assault strip.

The third phase involves repaving and widening the full-length taxiway, installing the ground ops area for C-17 ground training, adding an additional high speed turnaround at one end of the runway and strengthening the cargo ramp.

The final phase involves repaving, widening, possibly strengthening and extending the length of the main runway from 5,500 to 7,000 feet.

But the project is still well in its infancy.

Swaringen stressed there is no timetable for the phases and trying to create one is “virtually impossible.” At this point, Swaringen doesn’t know where the funding will come from either.

The N.C. Department of Transportation’s Division of Aviation recently release a report which ranked the Stanly County Airport 10th overall in economic output out of 62 general aviation public airports.

The report stated the airport generated almost $135 million in economic output in 2018.