McSwain reflects on career after county renames jail in his honor 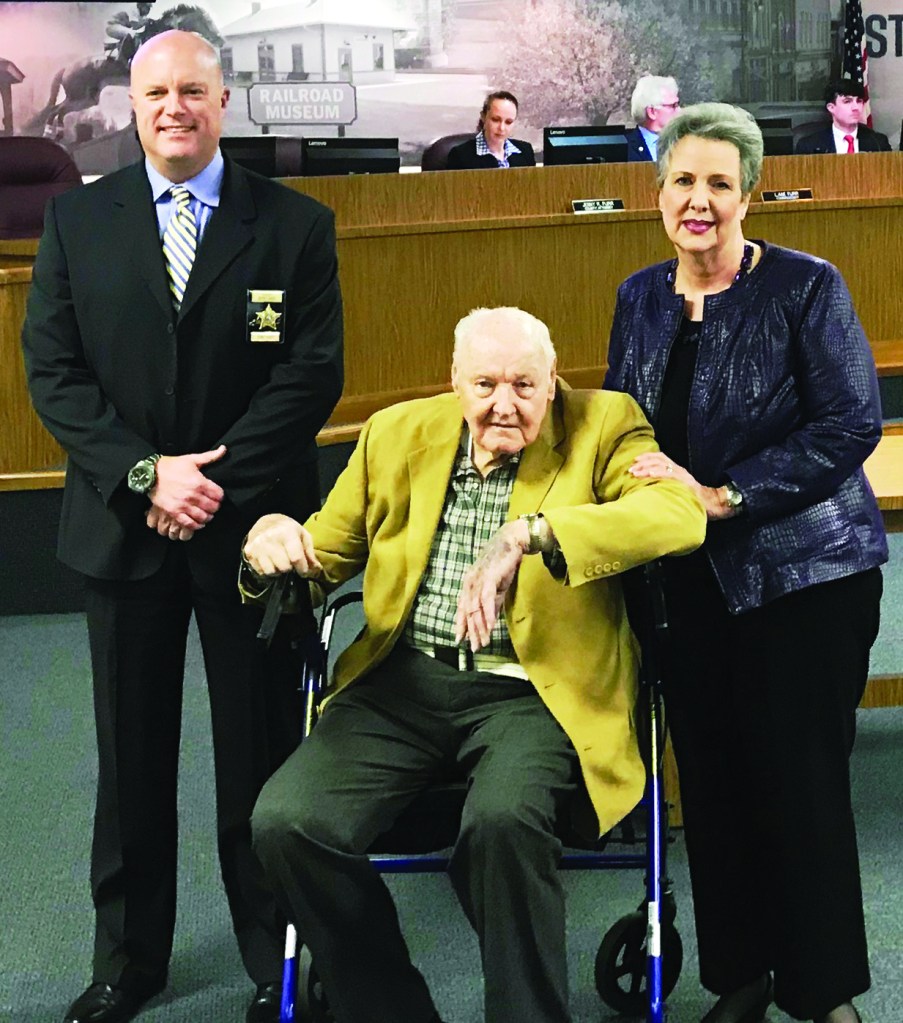 He served as Stanly County sheriff for 28 years, having been elected to seven consecutive four-year terms, but they probably didn’t hear it from him.

He is an extremely gifted carpenter, builder and woodworker who built the house he lives in and most of the furnishings within it. He has received enough awards from local, state and national law enforcement organizations to build a “trophy wall” in his house, yet won’t allow it to be done.

McSwain is a private, quiet and independent man who served the people of Stanly County for 35 years — first as a deputy, then as sheriff. He lets his record of service do the talking.

In recent weeks, current members of the Stanly County Sheriff’s Office, knowing McSwain would never seek accolades for himself, set in motion a plan to pay tribute to him, culminated by Monday night’s announcement by the Stanly County commissioners that the Stanly County Detention Center will be named in the former sheriff’s honor.

“Ralph L. McSwain served as a deputy from 1955 to 1962, then became sheriff, serving for 28 years. During that time, he was true to the office and true to the citizens of Stanly County,” Commissioner Lane Furr said. “By honoring him, it says to the people of Stanly County that we don’t forget those who have protected us.”

“That’s awful nice of them,” he said. “I appreciate it very much.”

One might think a person who spends 35 years in law enforcement probably planned to do that all along, but that’s not the case with McSwain.

“I went to Aquadale High School,” he said, “but I don’t remember when I got out.”

“He quit school and went to work,” added his wife Pat quickly. “But he went back and finished his degree and eventually graduated from Pfeiffer. That set a great example for his staff.”

Between leaving school and starting to work for the sheriff’s office in 1955, McSwain worked as a carpenter until then-Sheriff Robert M. (Bob) Furr hired him as a deputy.

“He (Furr) first got elected in 1954. He was re-elected in 1958, but resigned in 1959 to go to work for the Bureau of Alcohol, Tobacco, and Firearms. Sam Dry was promoted to sheriff after that, and I worked for him for three years.”

Then, in 1962, Deputy McSwain challenged Sheriff Dry in the political race for the county’s top law enforcement post.

“I thought I could do a better job,” he said.

And apparently the voters agreed. So, in December 1962 there was a new sheriff in town…and he was going to be around for a while.

The political climate was not as negative and mean-spirited during his time in office, McSwain said.

“There wasn’t anything like Facebook back then. The rumor mill was about the worst thing we had to contend with,” he said. “It was just ordinary politics.”

Much changed at the sheriff’s office during McSwain’s tenure there.

“It’s changed a lot since I started,” he said. “We didn’t have uniforms then; we did our job in street clothes. And there was no training.”

McSwain credits Bill Kearns, who was a constable in the North Albemarle Township, with helping him learn about the job.

“I rode with him a lot of times on calls and to serve papers,” McSwain said. “He helped me a lot.”

Perhaps it was entering the law enforcement community with no training. Maybe it was the mentorship provided by Kearns. Or, it could have been the offerings of Basic Law Enforcement Training courses by the state’s fledgling community college system. In any case, new county Sheriff Ralph McSwain saw the need for training his officers.

But he couldn’t justify requiring them to be trained when he wasn’t. And there was one way to solve that…get trained himself. So the high school dropout-turned-carpenter-turned-deputy-turned-sheriff headed back to school at night.

And he did so while serving full time as the county’s top law enforcement official in a time when there was no “online” or online classes.

“Sometimes a class assignment from Pfeiffer would be to watch a documentary on TV and critique it,” said Pat, “but he would be in class when it was shown. So I’d take notes and he would write the critique from those.”

McSwain also had to tackle a calculus course at Pfeiffer…no small task since he had never taken algebra in high school.

“He managed to teach himself algebra,” said Pat. “And he must have done a good job at it to pass calculus later.”

And it came as no surprise that not only did the Stanly County Sheriff’s Office begin to require training of its officers, but it also developed a reputation for turning out officers who “went on to bigger and better things,” according to McSwain, who named a few who came to mind.

“Loy Ingold started with us, went to the Albemarle Police Department, then on to the SBI. Roger Lowder was our chief deputy, and was elected sheriff when I retired. He died while in office. Mike Lowder went on to the SBI, worked with Homeland Security, and now is retired and has a consulting business in Virginia.”

And in true Ralph McSwain form, he did not mention that his emphasis on training and continuing education of his officers was recognized statewide.

“He won’t tell you that he was named to North Carolina’s first Training and Standards Council for Basic Law Enforcement Training,” interjected Pat.

That training came in handy in 1980 in what was McSwain’s closest brush with death in the line of duty.

“A fellow broke into a house in Davidson County and stole a handgun,” he said. “He came down here and robbed a homeowner up near Liberty Hill Church and was in hiding out near Red Cross. I was at home, and (deputy) Mike Lowder called me and I went out to meet him. It was early in the morning and when I got there, I saw him (the suspect) come running across a field toward me. As I stopped my car he shot me in the side and in the stomach and kept running. He also shot Mike in the shoulder before Mike took care of him (fatally shot the suspect). The guy who did it was from up north somewhere.”

“He was from Ypsilanti, Michigan,” said Pat. “I remember that like it was yesterday.”

After three weeks in the hospital, three months off the job, and another follow-up surgery,

McSwain returned to action, and continued for 10 more years before retiring at the end of his seventh term in 1990.

After hanging up the badge, McSwain remained busy, serving as a building contractor until a 2004 stroke slowed him down. He and Pat now enjoy peaceful and quiet surroundings at their home just south of Aquadale, and will celebrate their 40th wedding anniversary (it is the second marriage for both) later this year.

“He did everything in building the house except the electrical work,” said Pat. “And we have things we never could have afforded here because he was able to build them.”

And there is one more thing Ralph McSwain built in Stanly County…a strong and well-trained law enforcement community.

But you wouldn’t hear that from him.