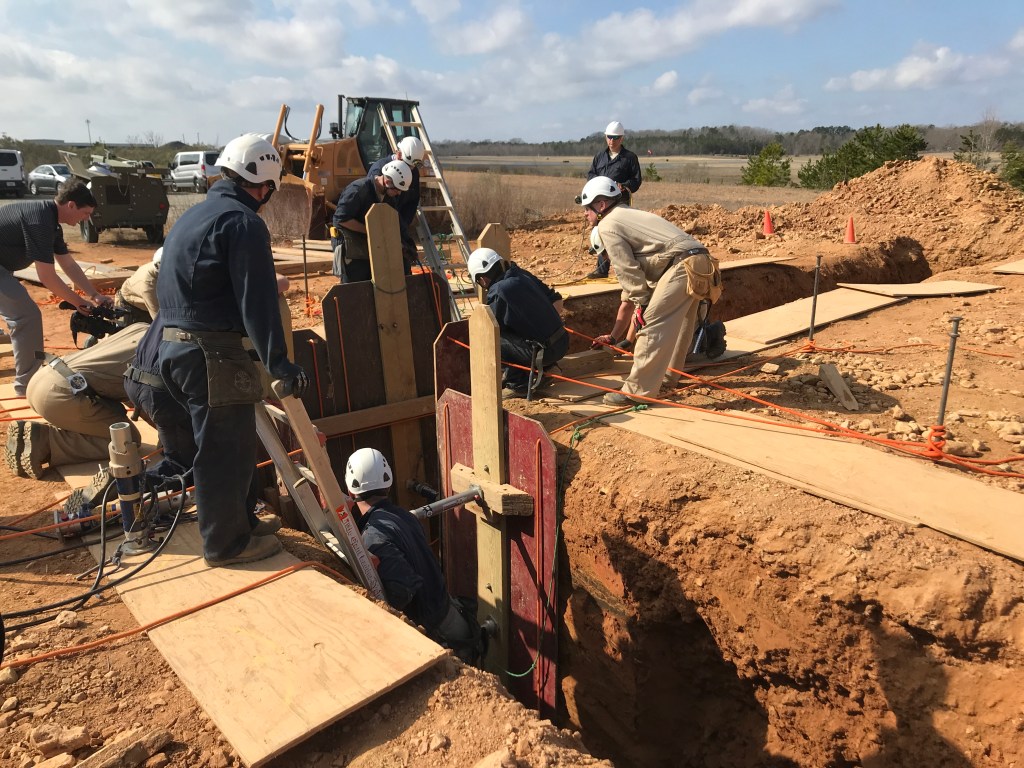 Firefighters and rescue workers stabilize a trench at the N.C. Emergency Training Center at the Stanly County Airport before they enter to rescue a 200-pound dummy victim.

N.C. Emergency Training Center partners gathered Thursday at the Stanly County Airport to discuss what has been accomplished during the last year and receive updates on funding, training and the needs of the facility housed at the airport.

The training center was created as a partnership between the N.C. Air National Guard and the Office of State Fire Marshal (OSFM) in December 2017. The center provides firefighters and rescue workers from around the country advanced training in areas such as trench rescues, aircraft rescue and firefighting, a heavy lifting course and rope rescues, among others.

The ANG also has a partnership with Stanly Community College to offer fire and rescue certification at the training center to civilians as well as firefighters and rescue workers. These certifications are under the OSFM.

ANG offers an Urban Search and Rescue training which includes the courses of confined space, trench rescue, structural collapse and ropes. These are all rescue 1 and rescue 2 certifications and it’s the only site in the country for ANG military and civilian firefighters and rescue workers to receive certification. The firefighters live and eat for free on the training base while they are taking their courses.

There are other firefighter, hazmat awareness and aircraft rescue programs the ANG plans to implement.

The projects include a mobile MD-80 simulator aircraft with propane burners to provide certification training. The aircraft intentionally catches fire and the firefighters enrolled in the training program have to work to extinguish the fire. The simulator will arrive at the airport sometime in March, Cook said.

The training center has also obtained four fire investigation training units through funding from the ANG. These are metal units built to resemble homes or businesses. Instructors intentionally set these units on fire so students can determine cause and origin of the fire and burn patterns.

Another major project is acquiring broadband access at the airport, the training center and an emergency management building close by so all the partners involved will be able to easily communicate with one another.

The training center is working to finish the interior of a training classroom facility as well as better maintain the center’s dining room to utilize it for its full potential for classes.

The students enrolled in the training center program live in open dorms. While these dorms are fine for the students, with more advanced classes with older, senior personnel, Taylor said more hotel-style dorms where people have their own rooms would be preferred.

Ideally, Cook said, all of the many projects needed to upgrade the training center would cost around $25 million.

After the presentation, people toured the trench rescue training program, where students were working to first stabilize a trench before they entered and tried to safely rescue 200-pound dummy victims.

“For us, this is about preparing first responders, whether it’s forestry service, emergency management, EMS, fire, police, all of those are integral parts,” Cook said. “If we can build a training center that can provide that resource and provide those expertise, not only is it going to help the region and the state, it’s going to help the local area as well.”