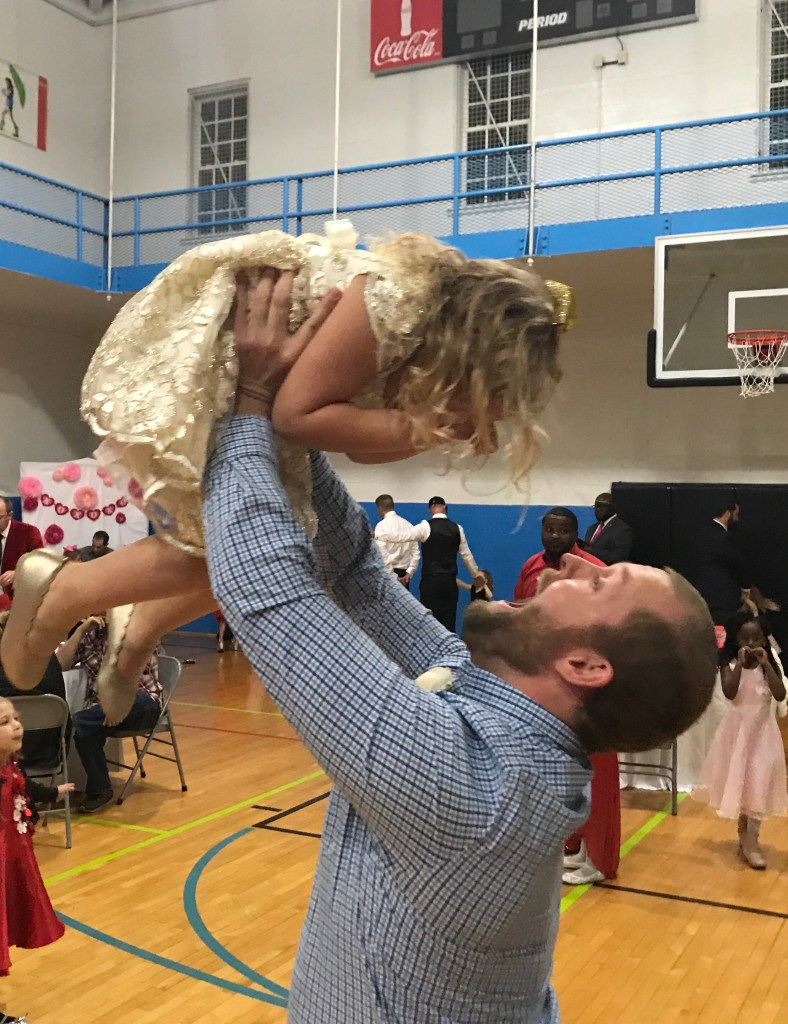 Ryan McGarity lifts his 3-year-old daughter Henley in the air during the Father-Daughter Dance Friday night at the YMCA.

“The event is for girls of any age to spend time with their father, grandfather, uncle or positive male role model,” said Kelley Bigger, family services director at the YMCA. “It is also a time for men to show their daughters how they should expect to be treated by other men.”

Sixty-four daughters were at the dance, Bigger said.

For many fathers and daughters, this was their first dance.

“I wanted to come because I have a daughter and she wanted to be a princess,” said Jeff Dahle. who came with his daughter, Harmony, 3.

She got dressed up, she got her nails and hair done and she wore a corsage. 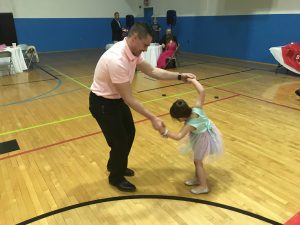 Jeff Dahle dancing with his 3-year-old daughter Harmony at the Father-Daughter Dance Friday night at the YMCA.

It was also Corie Pickett and daughter Anna’s first time.

“She does activities at the Y and I happened to catch the flyer,” Pickett said. “I believe in fathers being there for all the kids, but especially daughters, showing them how they should be treated.” 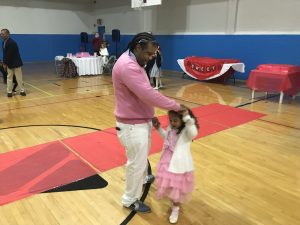 Corie Pickett dancing with his 3-year-old daughter Anna at the Father-Daughter Dance Friday night at the YMCA.

Terrence Wormley is a grandfather-like figure to Kylee, 6, and Kaylee, 5, and he was happy to be at the dance.

“I’ve been a part of their lives since they’ve been born,” he said. The best part was “being with them and breaking brownies with them.”

“I like having fun and being with my family” Kylee said. 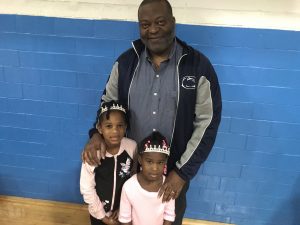 Terrence Wormley is a grandfather-like figure to 6-year-old Kylee and 5-year-old Kaylee.

For Kevin Robinson, the dance was all about making memories for his 4-year-old daughter, Halle.

“All I had to say was tiaras and she was all about it,” he said. 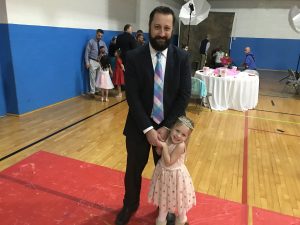 But others have been to the event many times.

Josh Campbell has been taking his daughter, Piper, 9, to the dance since she was 2.

“This is better than Christmas,” Campbell added. 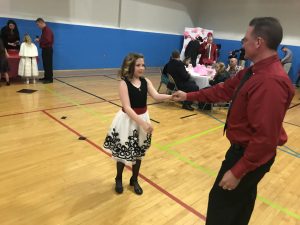 Josh Campbell dancing with his 9-year-old daughter Piper at the Father-Daughter Dance Friday night at the YMCA. Campbell and Piper have been coming to the dance since she was 2.

This is the third time Jim McGann has taken his granddaughter, Ope, to the dance.

“She loves it and loves getting all dressed up,” he said. 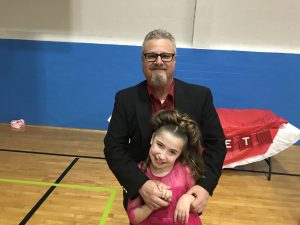 Jim McGann and his granddaughter Ope at the Father-Daughter Dance Friday night at the YMCA. This is their third time at the dance.

This was the second time Chris Taylor and his daughter, Chloe, 5, have come.

“It’s important that I set an example of how she should be treated when she gets older,” Taylor said. 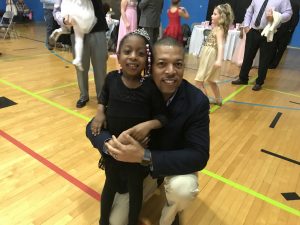 Chris Taylor attends the Father-Daughter Dance Friday night with his 5-year-old daughter Chloe. This is their second time at the dance.

Besides dancing, fathers and daughters could have their picture taken either professionally or with a Polaroid camera, they could have refreshments (which included popcorn, punch, cookies and cupcakes) and they could help design pictures frames.

Bigger also called the name of each couple and they got to walk down a red carpet and the daughters were presented with a tiara.

“For this night, the girls get their dad’s total attention and a little bit of spoiling,” Bigger said.

For one magical night, the young girls didn’t have to dream of being princesses.