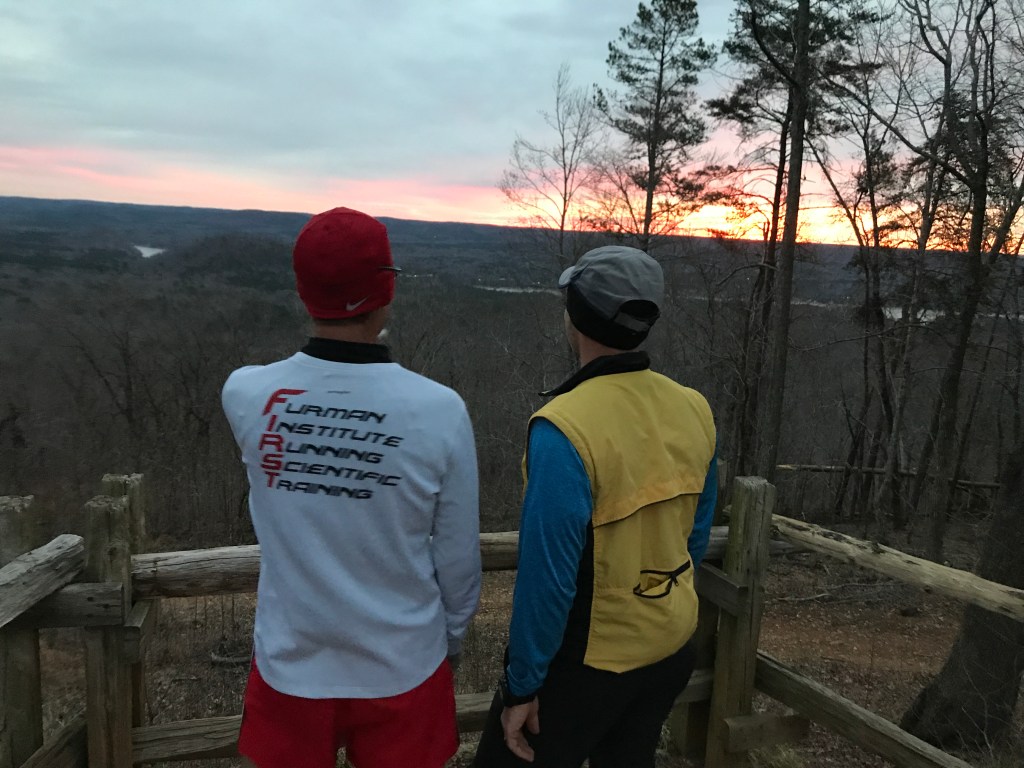 Fellowship of the Idiots runners Scott Murr, professor of health sciences at Furman, and Randy Hutchison of Greenville, S.C., look at the sunrise at the top of Morrow Mountain.

At 5:30 a.m. Saturday, around 300 people from throughout the country gathered outside in the cold at the YMCA to run to the top of Morrow Mountain and back –a total of 19.7 miles.

What an idiotic thing to do.

And that’s the point, according to Peter Asciutto, owner of Vac & Dash, who organizes the event each year.

As runners reached the top of Morrow Mountain, they casually take pictures and converse with other runners, enjoy water or Gatorade and most importantly, take in the sunrise.

“The sunrise was the best part,” said Isaac Glenn of Spruce Pine.

The race is free, it’s not timed and there are no awards, so runners can take their time and enjoy getting to talk to the people around them. But donations are accepted to help offset the cost of putting on the run.

“This race sounded like the perfect thing for any runner to go and experience,” added Scott Murr, professor of health sciences at Furman University and author of several books about running, who has been running informally for 30 years. “This is what every runner needs to experience.”

“Downhill running puts a little beating on your legs,” Murr said about the course. “Most people don’t practice downhill running.”

This was Jason Knight’s second time running the race. He ran last year and it was pouring rain and cold, he said. This year was much better because it ended up not raining and he got to see the sunrise. 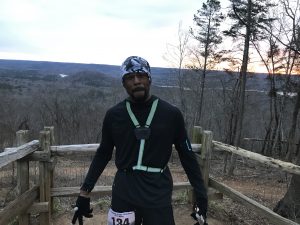 Jason Knight of Raleigh ran the Fellowship of the Idiots race for the 2nd time.

The race “was awesome and was incredibly well-organized,” said Chad Crockford of Charlotte. “The top of the mountain was beautiful.”

Kiestler Clontz and Beverly Little, both from Marshville, ran 13.1 miles, but they still had a great time.

“We are idiots in training,” Little said.

“If you can do this run, you can run any marathon,” Clontz added. 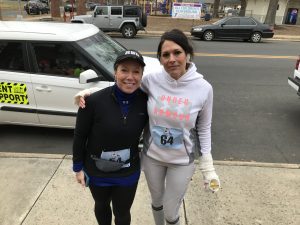 Runners Kiestler Clontz and Beverly Little of Marshville after the Fellowship of the Idiots race.

Many of the runners use this race as practice before the Myrtle Beach Marathon, which takes place in early March.

There were 158 first-time idiots and 142 returning idiots, said Asciutto.

People came from all over the state to run, including 43 from Charlotte, 15 from Concord and 11 from Raleigh.

And some people came from far away to run.

Case in point: Ricardo Bello. He flew from Chicago to Raleigh Friday morning just to run the race.

“Sounds like an idiotic thing to do,” Asciutto quipped.

Bello found the race on the website Running In The USA.

“This was the only race this weekend I found that had a 20-mile distance,” Bello said.

He’s running to train for the Tokyo Marathon.

Bello laughed that “when I first saw the title of the race I thought it was a joke.”

After the race, Bello was excited.

“The second half of the race was easier than I thought,” he said. 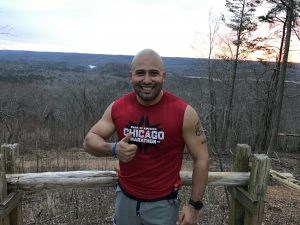 Fellowship of the Idiots runner Ricardo Bello admiring the sunrise at the top of Morrow Mountain. Bello flew from Chicago to run the race.

First-time runners receive a certificate and a T-shirt at the end of the race at the YMCA and they get their names on the Fellowship of the Idiot wall at Vac & Dash.

About 40 volunteers helped with the race, including people from the Stanly County Amateur Radio Club.

Asciutto is the founder of the race.

He used to run the 19.7 miles from the YMCA to Morrow Mountain and back by himself.

“We ran at 5:30 a.m.,” Asciutto said, and “the temperature was 22 degrees at the start of our run. We all ran together in the darkness and got to see a beautiful sunrise at the top of Morrow Mountain.”

Asciutto wrote about the run in The Stanly News & Press.

That same week, Renee, his wife at the time, was getting a massage from Greta Thompson.

During the massage, Greta said to Renee, “Did you read in the paper where those idiots ran from the Y to Morrow Mountain and back in the cold weather?”

Renee replied, “My husband is one of those idiots!”

Thus the race was born.

The race has grown in popularity throughout the years as word of the quirky race has spread across the state.

Ultimately, the race is successful because it’s casual with low pressure, people can bond and chat with friends and they can make good memories, Asciutto said.