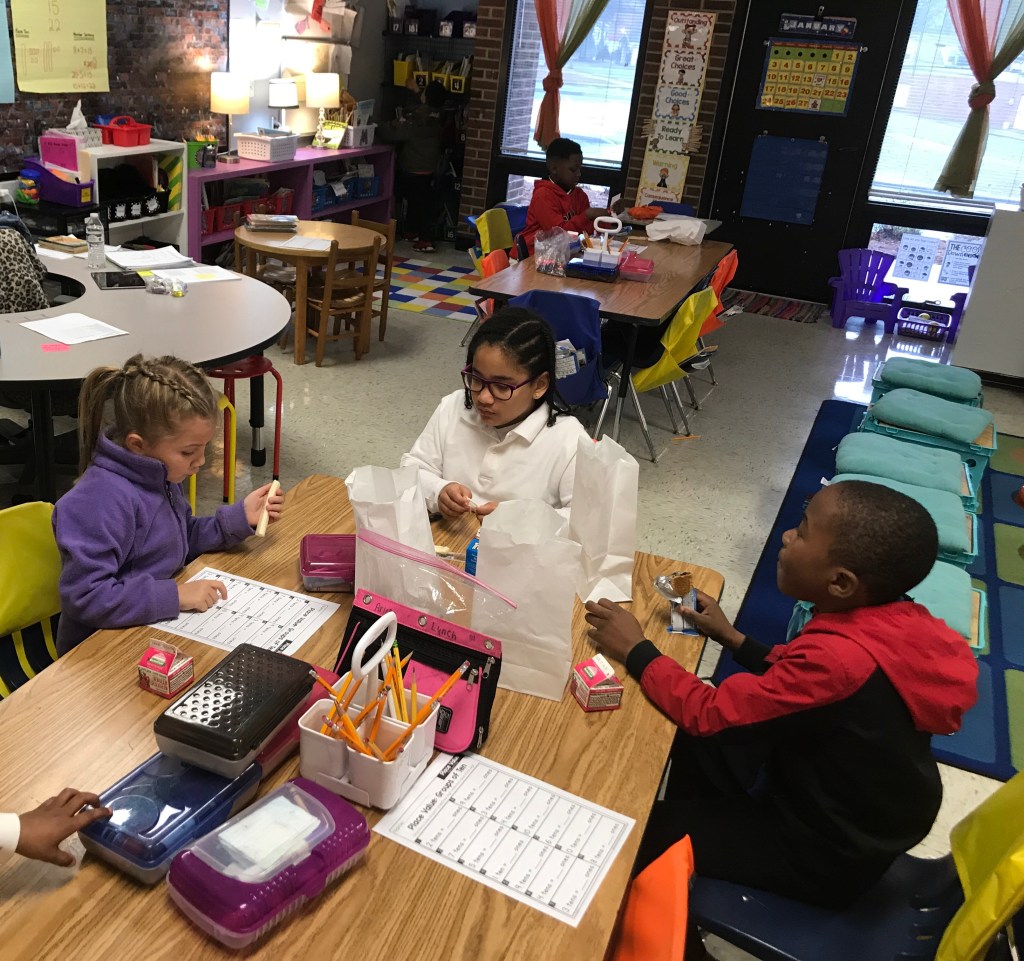 East Albemarle Elementary School recently started a new breakfast program which allows for more instructional time for teachers and makes sure all students start their day with a healthy breakfast.

The smart breakfast program, which was created in January, runs from 7:30 a.m. until 8 a.m. and allows students to quickly grab a snack to take to class while they have instructional time with their teachers.

The 30-minute period is “like a pre-school session where the students come in and do homework, work on morning work and catch up on missed assignments,” said principal Jonathan Brooks. “Instead of our kids sitting in the cafeteria for 30 minutes waiting to start instruction, we go ahead and get them out of the cars and off the bus and get the day started.”

“It’s important for us to set the tone to start the day off on a positive note,” he added.

There are three breakfast stations around the school for the students to receive their meals.

Besides the breakfast and lunch, students also receive either a fruit or a vegetable as an afternoon snack.

The school’s leadership team went to a N.C. Association of Elementary School conference and listened as a speaker discussed being intentional about starting the school day to maximize students’ success.

“So as a leadership school team, we started thinking ‘what are we missing here?’ ” Brooks said.

The school had some disciplinary issues in the mornings and students were often sleeping in class, so the team decided to try something different.

Some classes do not necessarily complete academic work, Brooks said. They often have restorative circles, where students and teachers sit in a circle and discuss issues and problems, or morning meetings, where the students discuss the objectives for the day.

Teachers do different activities during smart breakfast based on the needs of their classrooms, he said.

“I love it,” said first-grade teacher Bobbi Craig. “I think it’s a great idea because a lot of these kids come to school and have not eaten, so they’re not going to learn if they’re hungry.”

Craig added it’s “important that we take care of their physical needs before anything else.”

Her class has a variety of activities during smart breakfast, including morning work, morning stations, completing worksheets and simply reading a book quietly.

Before the program, the whole school was eating breakfast in the cafeteria and it was “too many children in one space,” Craig said.

When they were eating in close quarters in the cafeteria, the students often argued or were antsy for class to start, but when they’re eating in their rooms, the students are relaxed and mellow, educators said.

“The most important thing for us is to make sure we’re increasing the number of students that are actually getting a breakfast each and every day,” Brooks said.