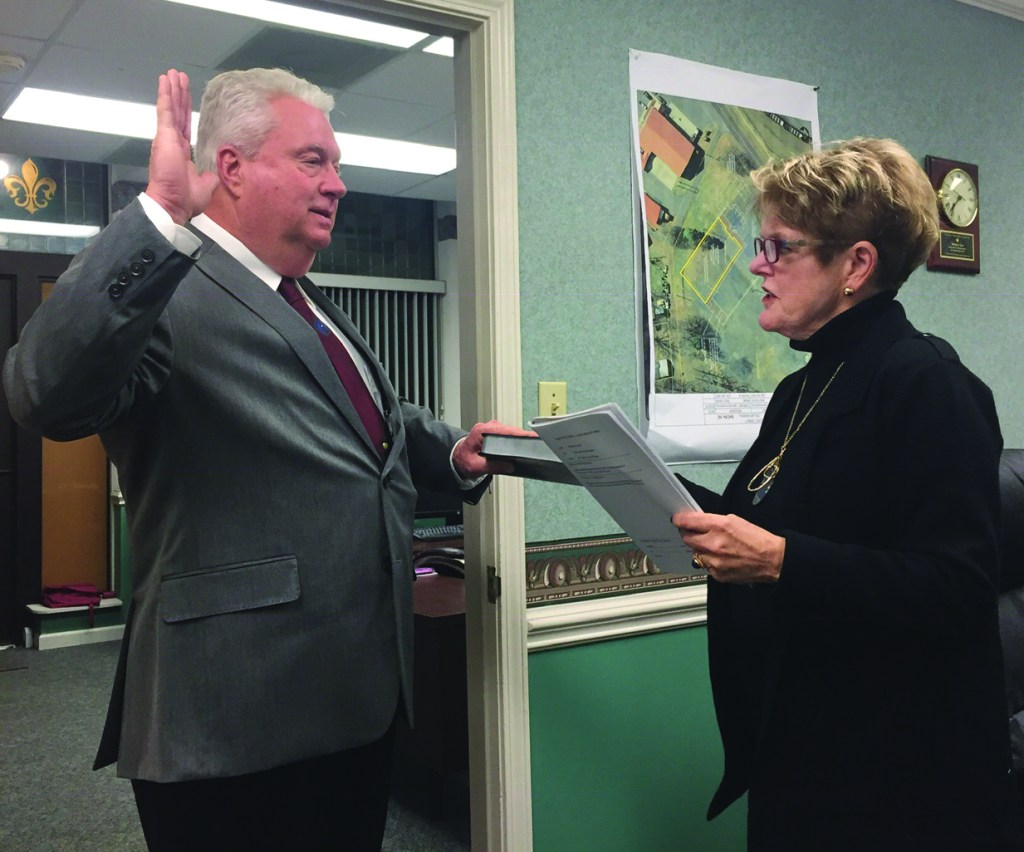 Gary Lowder takes the oath of office from Mayor Anne Harwood to be Badin's newest council member. He replaces Ryan Hatley, who was moving from Stanly County.

Multiple Badin residents approached the town council during its meeting Tuesday evening, requesting an update on the construction on Willow Street and complaining about the state of the former golf course.

Joey Hicks and Jamie Carriker were two residents concerned about the Willow Street project, as the construction is taking longer than hoped.

Willow Street is on a steep hill and, when it rains, the water can move dirt and erode the edges of the road, Town Manager Jay Almond said after the meeting.

It causes additional issues at the bottom of the hill. The council recognized the problem several years ago, but had to wait to begin construction due to the cost of the project.

With new pipes and drains being added, the town had small streets cut to allow residents and first responders to have access to their homes while construction continues.

“All I’m asking is, you guys could get a little more involved in seeing what’s going on down there, and letting us know what’s going on,” Hicks said.

Kevin Thomas of Lynn Thomas Grading said the company has faced multiple issues with the project, including the rocky ground, a cold and wet winter, and the cancer diagnosis of a key

team member.
“This has been the worst winter I’ve had since I’ve been alive,” Thomas said.

He said the crew is working as quickly as possible and encouraged residents to bring any concerns or questions they have to him. Thomas hopes to complete the project in about six weeks.

Almond also offered to relay information to residents with questions.

Pat Leonard and Nancy Vasser both asked that the town enforce ordinances regarding grass height for the property of the former golf course.

Leonard, who has lived in Badin since 1984, said she believes the grass and weeds are at least a foot tall. She feels they should be recognized as a “public nuisance” according to town ordinances.

Leonard is concerned that her young grandchildren will face additional danger from wildlife, saying she’s seeing more skunks and other animals on or near her property. She said she believes fire ant mounds on the former golf property are above a foot high.

Leonard and Vasser were concerned about coyotes and other animals roaming the former golf course and their nearby yards.

Both women said they are concerned their property value is declining due to the state of the former golf course. Vasser said the property is also overgrown near the elementary school and soccer field.

The property is no longer operating as a golf course but also does not contain a residence. It may not fall under the same ordinance requirements that a residential property would. After the meeting, Almond said he planned to review the ordinances.

Jeff Littlefield, resident engineer for District 10 of the North Carolina Department of Transportation, asked the council for its opinion on six old trees by Falls Road.

Littlefield noted removing the trees could be jarring aesthetically, but said that the trees are old and “not in great shape.” The council voted to have the trees removed.

Littlefield said he will look at getting a full estimate and, at Mayor Anne Harwood’s request, will look to see what replacement options are available.

Sam Smith, an engineer with Chambers Engineering, provided an update on the planter median on Falls Road.

Smith said a new curb and gutter will be added to the median. He presented a plan to the council, adding he would immediately request permission for the project from DOT. The plan shows small shrubs and a garden bed for annuals.

New council member Gary Lowder was sworn in to his seat on the council. He takes the place of Ryan Hatley, who recently resigned after moving out of the county.

“I was really honored when I was asked to take this council seat, and it makes me feel good,” Lowder said after the ceremony. “I’m proud of it, really. I want to promise to the town of Badin and its citizens I’ll do everything I can to make Badin a better place.”

The board tentatively set its budget retreat for April 30, if Councilman Larry Milano, who was unable to attend Tuesday’s meeting, is able to make that date. The council marked May 10 and 11 as backup dates.

The council went into closed session, then reconvened briefly before adjourning.