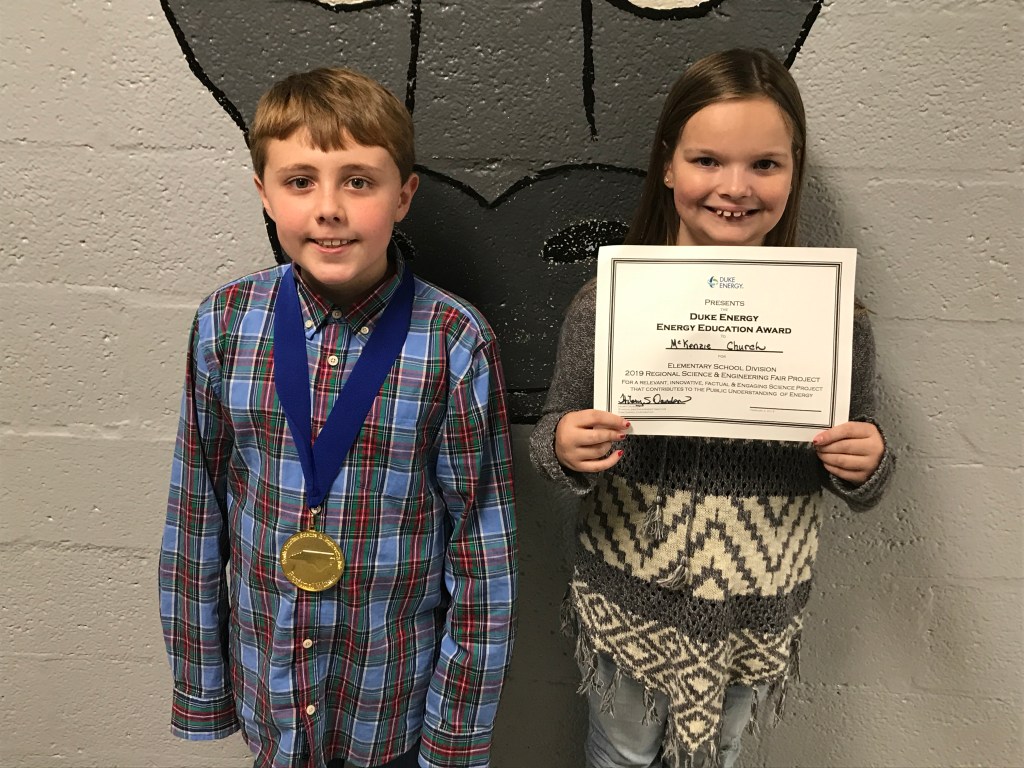 A total of 21 students from six Stanly County schools competed at the Regional Science Fair at the University of North Carolina at Charlotte Feb. 1-2.

Fourth-grade students Mason Conte and McKenzie Church of Norwood Elementary were among those who went to regional.

Conte, 9, worked to find the safest way to salt roads.

“When we salt roads, the salt gets on the roads and it makes it so cars rust and when it rains, plants and animals die,” Conte said.

Conte had three numbered cups, each filled with the mixtures he was comparing, and he put them in the freezer and used thermometers to see at what temperature they froze.

Ultimately, the beet juice and rock salt took the longest to freeze and so it was the safest method.

Conte won the SigmaXI Award for ingenuity and creativity and he also was one of 16 winners who will advance to the state STEM fair in Raleigh March 29-30.

“I felt excited for going to the finals and I felt joyful for getting the creative award,” said Conte.

Church, 10, built her own clean energy hydro dam and tested whether a longer or shorter pen stock would be best to control water flow and create electricity.

She built the hydro dam out of wood, and also bought pipes for the pen stocks and bought the turbine.

She found the longer pen stocks worked better because the longer the pen stock, the more electricity was created and the faster the water runs to the turbine.

“I felt really good and happy that I won the award,” Church said.

Other Stanly students at regional also did well.

Also, Ashlee Miller and Joni King of South Stanly Middle School received two special awards at the Regional Science and Engineering Fair. Their project took first place in the middle school division for demonstrating thorough and creative research while investigating the harmful effects that specific pollutants have on freshwater organisms.