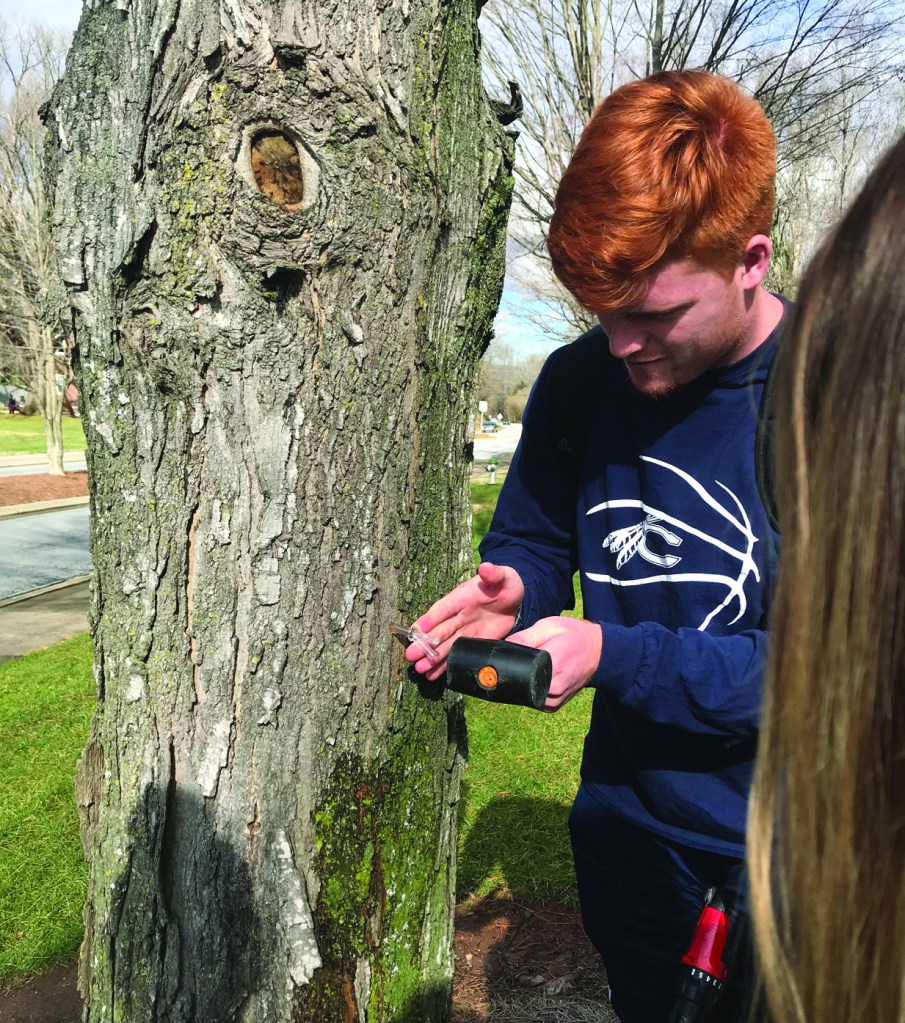 Typically, the sap runs best in maples when the mornings begin with frost on the ground and the afternoons are above freezing. Recently in Salisbury, the weather has been conducive to the craft of sugaring, or converting the sap inside maple trees in to maple syrup.

Students from Dr. Tyler Davis’ ENV 1402 Land Management & Ecology and Dr. Carmony Hartwig’s BIOL 1502 Structure and Function of Organisms classes at Catawba collected about 20 gallons of sap over two weeks in late January and the first of February from a variety of maple trees on campus and in the Fred Stanback Jr. Ecological Preserve.

These students practiced the art of environmental stewardship by carefully selecting trees and minimizing their damage by using a clean sharp drill and carefully tapping into the sides of healthy maple trees. Sap was collected daily. Students noticed the weeping holes made by the yellow-bellied sapsucker and the hairy woodpecker on one of the same maples that they tapped.

Sap was carefully collected and stored under refrigeration to prevent spoiling until the sap was boiled off during the finale of the Catawba Maple Days held in the College’s Center for the Environment on Feb. 4.

“I had no idea that the sap was mostly water, and it came out fast. It was amazing that you could taste sugar in the sap,” explained Darreon Gittens of Salisbury, a student in Dr. Davis’ ENV 1502 course.

Sap was collected from a variety of maples, specifically the Northern and Southern Sugar Maple and Red Maple. The starting sugar content of the sap was about 2.5 percent estimated with a refractometer.

Based on “Jones Rule of 86” (an old time rule-of-thumb dating from 1946), approximately 34 gallons of sap are required to make a single gallon of maple syrup. Concentrating the sap to syrup by evaporation was conducted using a variety of methods, wood fuel, a propane burner, and finally, the “finishing” of syrup on a camp stove.

“Flavors of caramel popcorn and cotton candy!” exclaimed Chloe Taylor of Aurora, Ontario, a freshman Environment and Sustainability major. Her comment was a huge compliment to the final Catawba maple syrup product considering that it was uttered by a Canadian student from just outside Toronto.

Overall, the event brought together more than 50 students and a dozen faculty and staff to sample the freshly made hot syrup.

“Dang, that’s good. It’s the real stuff. I want to do it.” whistled Katelyn Baity a freshman Environment and Sustainability major from Lexington.

Many students remarked on the time and energy required to boil down the sap.

Dr. Jay Bolin, chairman of Catawba’s Department of Biology and a botanist who assisted with the project, remarked, “With the exception of some areas in western North Carolina, the state, and particularly the coastal plain and piedmont, are not particularly suited for commercial scale production of maple syrup due to the short sap season and relative lack of Northern Sugar Maples, but it’s still fun to do.”

At the end of long day of sugaring, John Dewitt, a Biology major from New England, specifically New Salem, Mass., enrolled in Dr. Hartwig’s BIOL 1502 course, exclaimed, “Yankee approved!” after he polished off the last bit of syrup until the next year’s Catawba Maple Days.