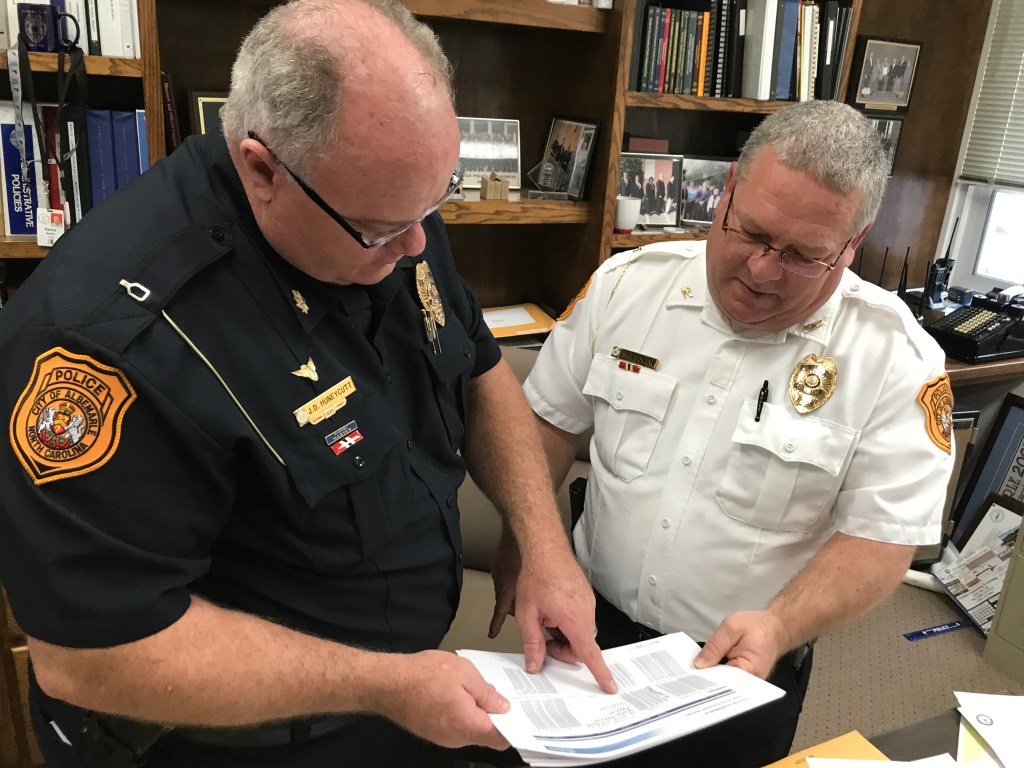 All good things must eventually come to an end.

And for Danny Bowen, who has been the Albemarle Police chief since November 2015, that means retirement. His last day is Friday.

There will be a reception for Bowen from 2 p.m. to 4 p.m. Friday in the Ray Allen room at City Hall.

Bowen knew he would be retiring in early 2019 about a year ago.

Jesse Huneycutt, who is the current assistant chief, will be the interim police chief until the department finds Bowen’s permanent replacement.

“Chief Bowen has come to mentor me in the process of administration,” Huneycutt said. “I’ve learned a lot from him and hate to see his leadership go. I’m certainly going to miss him.”

“I never had any idea that I would be lucky enough or blessed enough to be the chief,” he said.

Bowen especially enjoyed when he was a school resource officer getting to know the young children at several elementary schools.

Bowen would watch the students during recess and would often eat lunch with them. He got to personally know several of them and as they’ve grown up, he still sees many of them in the community.

“You were kind of a celebrity” to the students,” Bowen said.

“The most satisfying part of the job is when you get to help somebody,” Bowen added.

He specifically referenced finding a missing child or providing justice to a victim by making a key arrest.

But he said the job is more challenging today than it was when he first entered the force in 1990 because “of all the new stuff that we didn’t have in the ‘90s,” especially body cameras and social media.

But while there is so much new technology for the officers to learn how to operate, “it’s been good for them,” Bowen said.

“Social media is probably the biggest struggle for law enforcement to deal with,” he said because so many people can easily log on Twitter or Facebook and make comments “about things they think we should have done or ways they want us to do things.”

Bowen said he will most miss seeing his police colleagues each day.

“My biggest struggle in retiring is that I will not get to be around these people and see them every day,” he said. “I really do think of them as my extended family. … they’re the people I spend most of my time with.”

He has had several people in the community tell him they appreciate what the police department does and they will miss him.

“That really does mean a lot,” Bowen said, “because you want to leave on good terms and feel like you’ve done something good. We’ve really tried to do the best we could for the community.”

He and his wife, Evelyn, look forward to going on several cruises and he plans to spend quality time with his four grandkids. He also plans to play golf, pickleball and fish.

And a big twist that will surely keep him busy: In late January, Bowen found out the identity of his biological mother.

And a few weeks ago, not knowing anything about them, he officially met his birth mother, along with his birth brother and sister, who all reside in South Carolina.

“They’re really nice people and it’s been great,” he said. “We’re looking forward to getting together again and learning more about each other.”

There’s some happy irony in Bowen’s new-found family: “My brother, ironically, is a police officer,” he said with a chuckle. “How about that?”