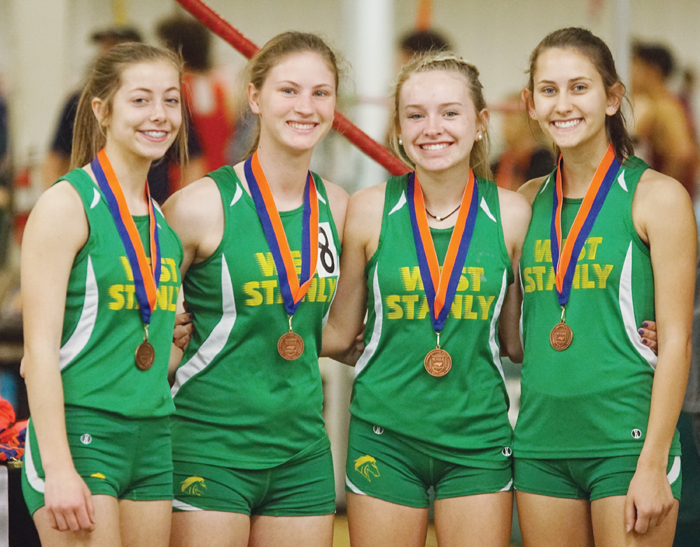 The foursome of Pierson McManus, Natalie Almond, Rachel Efird and Maddie Miller were the eighth-ranked 4×800 meter relay team in the field of 16, seeding the team in the fastest heat. The eight fastest ranked teams watched Patton run a 11:18 time in the first heat, which gave them the time they would need to beat to at least score points.

McManus ran the first leg for the relay and the senior delivered a strong opening 400 meters, keeping the competition close while still saving something for a finishing kick. McManus handed the baton off to freshman Natalie Almond with the Colts in fifth.

Even with a messy baton exchange, Almond took off with the Colts in contention for a medal. Almond ran solid splits to pull away from the sixth-place team while keeping the Colts close to Ashe County running in fourth.

Sophomore Rachel Efird ran the third leg equaling her two teammates with a time in the 2:40s. She built the lead to secure at least fifth for the Colts while cutting the gap on Ashe.

Efird handed off to Miller, the Colts’ 800-meter specialist, who wasted no time carving into the gap between her and Mahaley Cronk of Ashe. Miller matched every surge from Cronk to stay close. With a lap to go Miller made one last move. Coming out of the last curve the senior found enough speed to out lean Cronk at the wire.

The two teams watched as the times flashed up on the screen with West finishing fourth posting a time of 11:04.75, while Ashe County was fifth in 11:05.16.

Individually, McManus and Almond ran in the women’s 4×800-meter race, both setting personal records. McManus started strong running 6:12 over the first half of the race, finishing 14th overall with a 12:28. Almond finished the race with a 12:48, the third-fastest freshman in the event.

The Colts closed with the women’s 4×400-meter relay. Maddie Miller, Rachel Efird, Brooklyn Simpson and Onii Bivens teamed up to run a season-best 4:36 to finish 15th.

The Colt men had also qualified for the 4×800-meter relay. The team of Noah Almond, Arturo Zelaya, James Shue and Logan Huneycutt ran a 9:27 for 17th place.

Up next was the team of Christian Bowden, Jason Henriquez, Noel Medina and Collin Cooper running in the 4×200-meter relay. The four Colts qualified with a time just off the school record. Running in the slower first heat, the quartet finished in sixth, running 1:39.15.

After a short break the group will head to outdoor track.