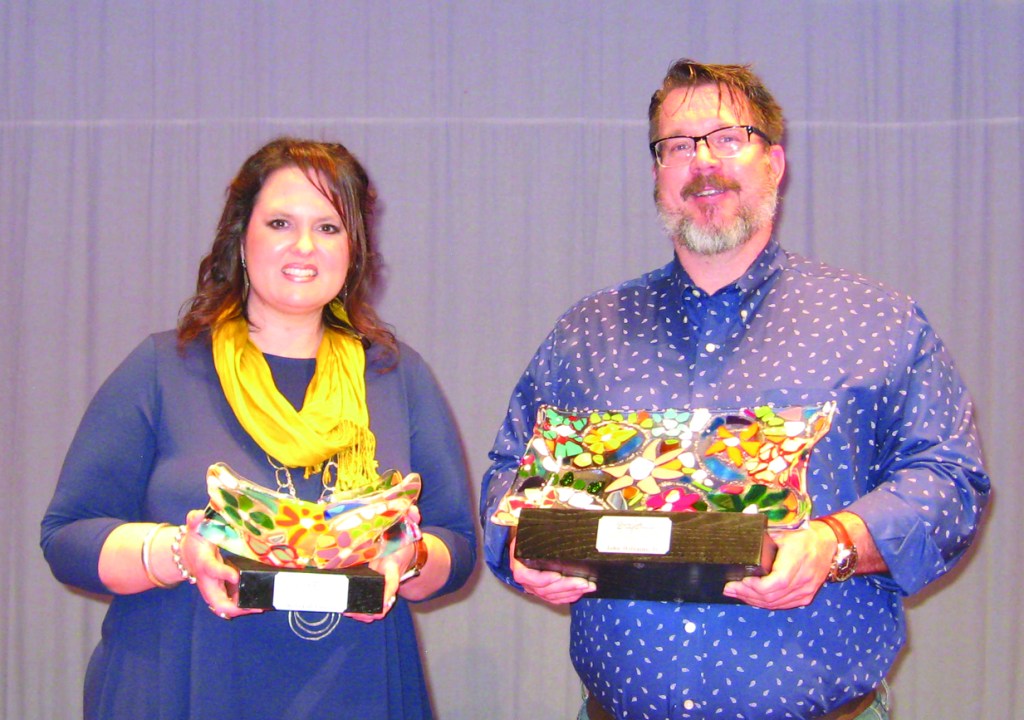 Rebekah Crisco, recipient of the Fine Arts Educator of the Year award, and John Williams, named the Arts Person of the Year, display their awards.

Local artists showed off their skills through displays, performances and demonstrations at the third annual Stanly County Celebration for the Arts Feb. 17.

The event at the Stanly County Agri-Civic Center brought together musicians, potters, painters, singers and more.

Performances from 9:15 a.m. until 2 p.m. featured Melissa Kathleen’s School of Dance, the Central Elementary Glee Club, Stanly County Concert Band, the Gospel Choir of Pfeiffer University and many others.

While the performances took place in the auditorium, several items were raffled off, including many handcrafted pieces. Guests viewed art placed throughout the building.

Some of the artwork was created by high school students for the Pfeiffer University High School Art Contest, while the rest were contributed to the middle and elementary school art show.

Teachers chose six pieces from each elementary and middle school and eight from each high school to display in the show.

Jim and Mary Ann Gantt sold pottery from their company, Thistle Pottery. They also provided a demonstration, letting children work on the vase throughout the day. 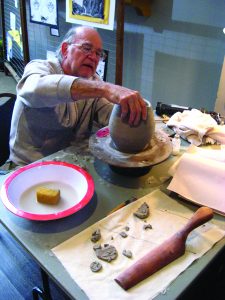 Jim Gantt gives a pottery demonstration during the event. His wife, Mary Ann, created the vase. The couple let children work on it at the event. Jim then added the final touches to the vase.

“I built the vase last night and put the coils on it,” Mary Ann said. “I let the children play with it, and he’s finishing it.”

As Mary Ann greeted customers, Jim smoothed out the top of the vase, uneven after the handful of children added their touches. The couple planned to fire and glaze the vase to complete it.

David Ritzheimer, owner of Wildlife Creations in Richfield, showed off his woodwork. Ritzheimer, a game warden, has only been working with wood for about three years, but the samples he showed at the event included a wide variety of art: carved paddles, a bench, decorative bowls, a wine holder and other items.

After the Talent Company wrapped up the performances by singing selections from the musical, “Little Women,” several artists were honored at the awards ceremony. A reception was after the ceremony.

The Regional Artist Project Grant went to Lorraine Turi, a photographer and instructor at Rowan-Cabarrus Community College. Turi plans to use the money to purchase a new Canon camera.

The Fine Arts Educator of the Year Award was given to Rebekkah Crisco, an art teacher at North Stanly Middle School. The award, also known as the Jim Kennedy Award, is given to a fine arts teacher in Stanly County public schools each year. Crisco received a classroom grant for $250.

John Williams was named the Arts Person of the Year. He has been a teacher for 27 years and teaches visual arts at North Stanly High.

The Arts Person of the Year gets to choose to which arts group a $250 donation will be sent.

From fire to sweets: Chief Shawn Oke is retiring