From fire to sweets: Chief Shawn Oke is retiring 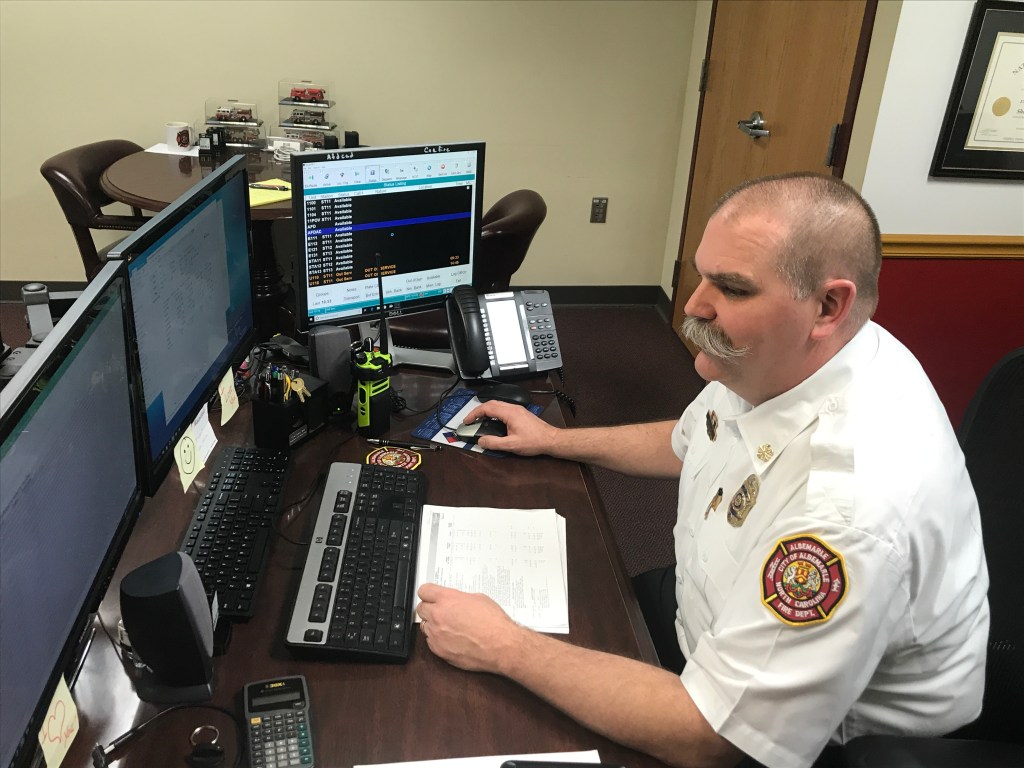 Fire Chief Shawn Oke is planning on retiring at the end of May to devote more time to the Albemarle Sweet Shop, which he owns.

Albemarle Fire Chief Shawn Oke is planning on retiring at the end of May.

The city is currently accepting applications for a new fire chief.

“I’ve been thinking about it for a few years,” Oke said about retiring.

He has spent time praying about the decision as well.

He joined the fire department in 1989 as a firefighter.

“I’ve actually worked every position except fire marshal in the department,” he said.

Besides firefighter, his many positions include driver, fire captain, battalion chief and finally chief.

For Oke, he wants to leave on top.

He wants to “leave when I feel like the department is in a good place” and he felt like the end of May was a good stopping point.

“For nine years as the fire chief, I’ve been able to affect a lot of positive change and it’s time for somebody else to come in and do some things,” Oke said.

But it will be a big adjustment.

Oke is a third-generation firefighter and his oldest son is a firefighter in Concord, while his other son is finishing up his associate’s degree and is going into the fire service.

“It’s good to see your kids following in your footsteps and doing the things that you did,” he said.

Oke will also have to get used to not wearing a pager and waking up in the middle of the night.

“The thing I worry about is hearing sirens and not knowing where they’re going and what they’re doing,” he said.

But Oke is only semi-retiring: though he’s leaving the fire department he will not be leaving Albemarle Sweet Shop, which he has owned since 2000.

If anything, Oke is leaving the fire department to devote more time to the sweet shop.

“Really my decision to retire is based more on what’s happening downtown, the potential growth that Pfeiffer is bringing and a lot of opportunities for the bakery to move forward,” Oke said.

When talking about working as fire chief and owning the sweet shop, Oke said “it’s tough to do both.” He said there’s currently not a lot of downtime in his life.

Oke has plans to try and create a website for the sweet shop and he wants to start shipping the products outside of Albemarle.

Oke wants to “totally engross” himself with the sweet shop.

The sweet shop has offered a nice change of pace from the hectic and sometimes all-encompassing job as fire chief.

“If I mess up there I only burn cookies,” he joked.

He also will enjoy spending more time with his family and “not having to be concerned with being called away at a moment’s notice.”

The main thing Oke is concerned with now is working as hard as he can.

“My dad taught me that if you’re going to get anywhere in life, you’ve got to work hard to earn it,” Oke said.

About his position as fire chief coming to an end, he said, “I want to make sure that I finish strong and really run as hard as I can until the very end.”