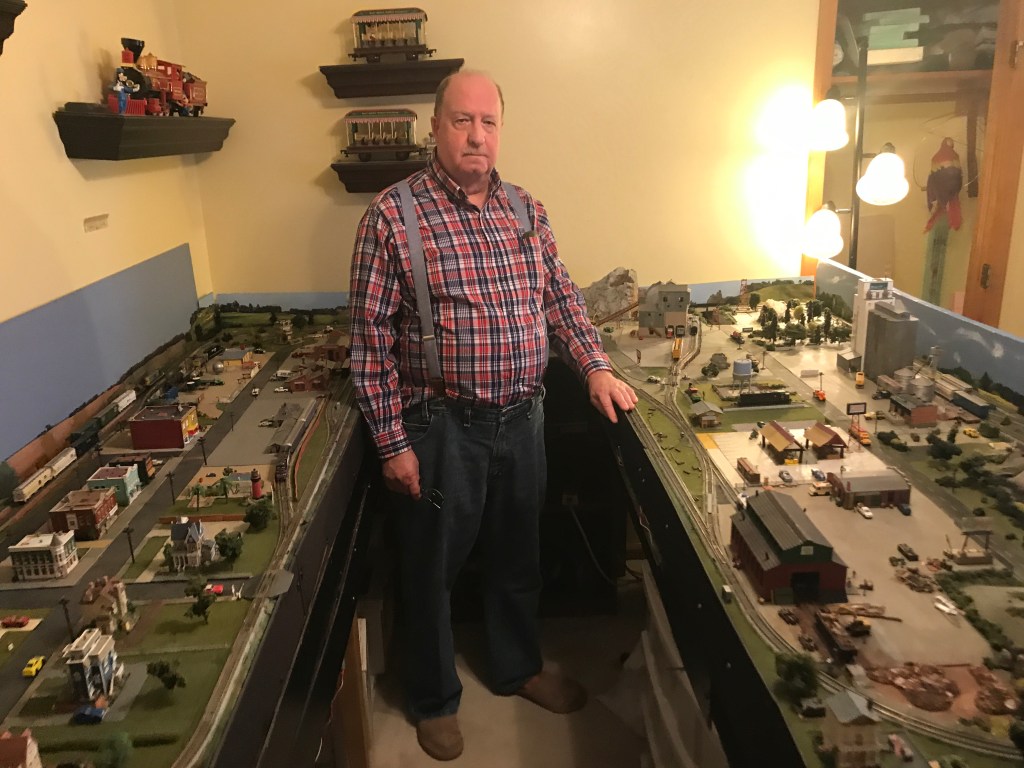 His intricately detailed model homes look like they’re straight out of the opening credits of “Mister Rogers’ Neighborhood.”

But Hock’s layout is quite unique; he depicts areas in Stanly County.

From businesses in downtown Albemarle to Mauney’s Feed Mill in New London to Morrow Mountain, Hock has recreated many notable locations in Stanly — albeit on a much smaller scale. 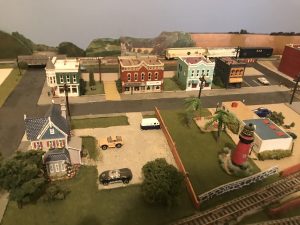 Originally from Franklin County, Hock and his wife, Mary, have spent the last 13 years in Albemarle.

Hock, 72, is retired after working in the textile industry and in warehouses.

Hock’s passion for trains started when he received a Lionel train set as a child.

“I thought about building trains for a long time,” Hock said.

He started building some, but he would inevitably stop because he always considered it just a childhood fantasy.

This changed when he went to a large model train show in Bradenton, Fla. and “well, the old [train] bug started again,” he said.

He bought several pieces at the train show to “still see if I had the itch.”

He tinkered with his train sets and made many errors, but ultimately he was happy: he discovered he still had the itch.

Hock and his wife moved to Albemarle in 2006 and he really wanted to get back into modeling.

He used a spare room to start putting stuff together, but he initially didn’t know what he wanted to make. So he tinkered, building several different tracks and then tearing them down to build new ones.

“So then I decided, ‘You know, I live here in Albemarle. Why not model Stanly County?’ ”

He first made a plan on paper of his vision for the Stanly County layout before starting to build it.

Hock initially bought a few train pieces at a local hobby shop and then once he retired, he went to various model train shows, yard sales and flea markets to find different pieces.

“I would find things that were not necessarily perfect, but we would bring them home and make them work,” Hock said.

Many of his set pieces come from everyday items: the bristles of an electric toothbrush, a water filter cap, pieces of tile, screen wire and sticks found outside.

His current Stanly County layout has taken him about five years and he is still working and tinkering with it.

His model set is only a representation of Stanly County, not an exact model. Many of the sets are created wholly from his imagination, like Kay’s Rock Park. 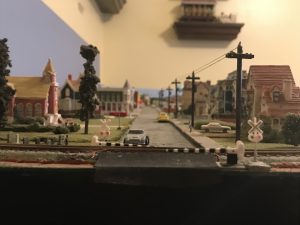 A closeup of a small neighborhood in Robert Hock’s model train set which closely resembled places in Stanly County.

But he enjoys his work.

Hock is also quick to point out that he is not an artist, nor is he a craftsman.

“I’m an amateur hobbyist,” he said.

“I take ordinary things and try to turn them into a thing of beauty,” he said.