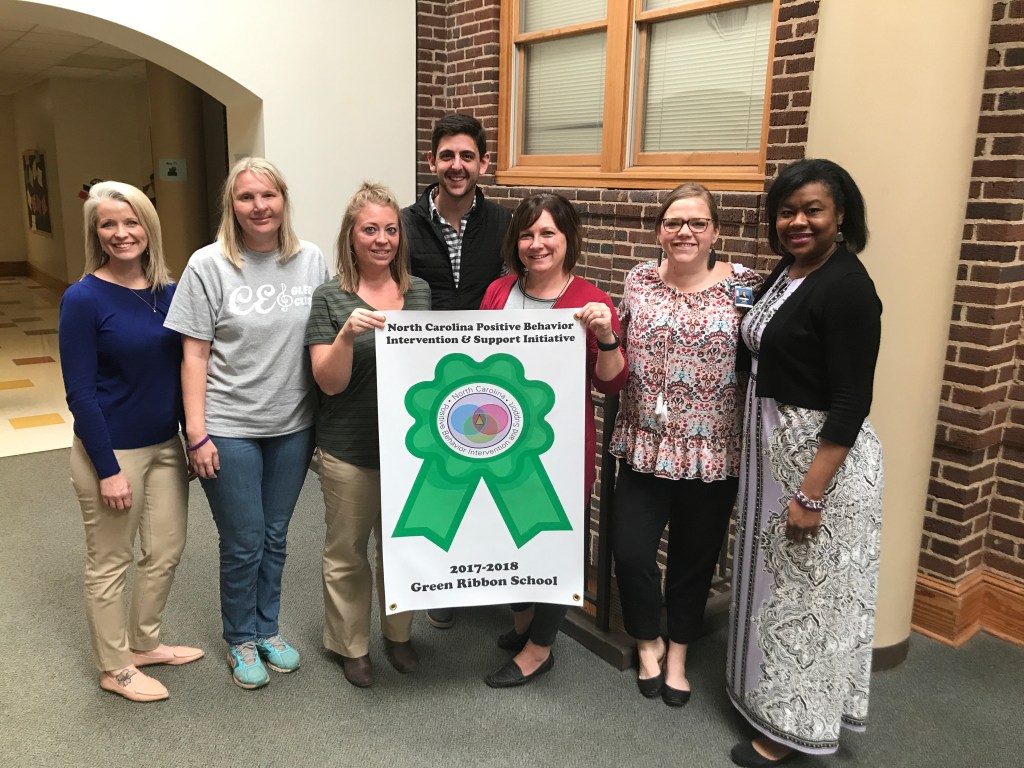 Central Elementary School recently earned the Green Ribbon Award for the efforts the school has made in implementing the Positive Behavior Intervention and Support (PBIS) program.

“The purpose of PBIS is to bring in a framework that puts in place supports for all students when it comes to behavior,” said Sheri Burris, curriculum coach at Central Elementary. “So just like with academics where we would work with students that have gaps and needs, PBIS allows us to work with them on putting strategies in place to correct behavior issues.”

There is a nine-person PBIS team at Central Elementary composed of teachers, principal Melissa Smith and Burris and they have gone to three years of PBIS training.

“I am totally amazed at this PBIS leadership team” said Smith.

“I am excited that the school team at Central has embraced PBIS and wants to invest in a proven program that promotes a culture of success,” added Stanly County Schools Superintendent Dr. Jeff James. “Behavior and academics go hand-in-hand. My hopes are all our K-8 schools will implement this proven program and see the benefits Central has seen.”

Burris said some of the focuses of PBIS include using a common positive language with the students, identifying students in needs of either strategic or intensive interventions and seeking the appropriate strategies for each student.

Central has core values that are reinforced throughout the school year: Be safe, be responsible and be respectful.

The school has a PBIS Expectations Matrix which describes to the students how the core values of being safe, responsible and respectful can vary in different areas of the school.

The core values are part of “the common language that we do encourage all our teachers to use,” Burris said.

And the common language includes teachers complimenting students when they see good behavior.

But when teachers see inappropriate behavior, instead of punishing or yelling at students, teachers ask the students several questions: What are you doing? What should you be doing?

Teacher then ask students to show them the proper behavior.

These questions put the shift on the students to be more responsible for their behavior rather than the teachers.

“When they have to verbalize it, they internalize it,” Burris said.

Before PBIS, there was no consistent behavior system. Teachers had different ways of dealing with behavioral problems. But PBIS allows all the teachers to be on the same page when it comes to dealing with student behavior.

Central has had the PBIS program since the 2016-2017 school year and the PBIS team was trained for six months before the program was fully implemented in the school. The training is offered through the N.C. Department of Instruction.

Teachers instruct the PBIS model to students through a variety of ways including role playing, modeling, videos and books.

All of the classrooms have cool down centers, where students can go to calm down, relax and get control of their emotions.

These programs are working because Burris said the school has seen its behavioral problems (including suspensions and office referrals) decrease each year since PBIS was first implemented.

But the school still has to continually adapt to new students and teachers that are not familiar with the PBIS model.

“When we have new staff we really have to start again to make sure everyone is on board,” Burris said.

PBIS is not easy, she said. It required a shift in the mindset of the staff and the school had to work to get the whole staff to buy into the model.

The school has quarterly events, such as dances or field trips, to reward students that have consistently showed positive behavior.

In order to earn the Green Ribbon Award, the school built and implemented the PBIS framework and had to document the success of the program through data.

Central is the only Stanly County school to be awarded the Green Ribbon Award.

“Without this PBIS team, I know without a shadow of a doubt this school would not have been driven forward had they not come together as one and teach the rest of the staff…how to love our children right,” Smith said.