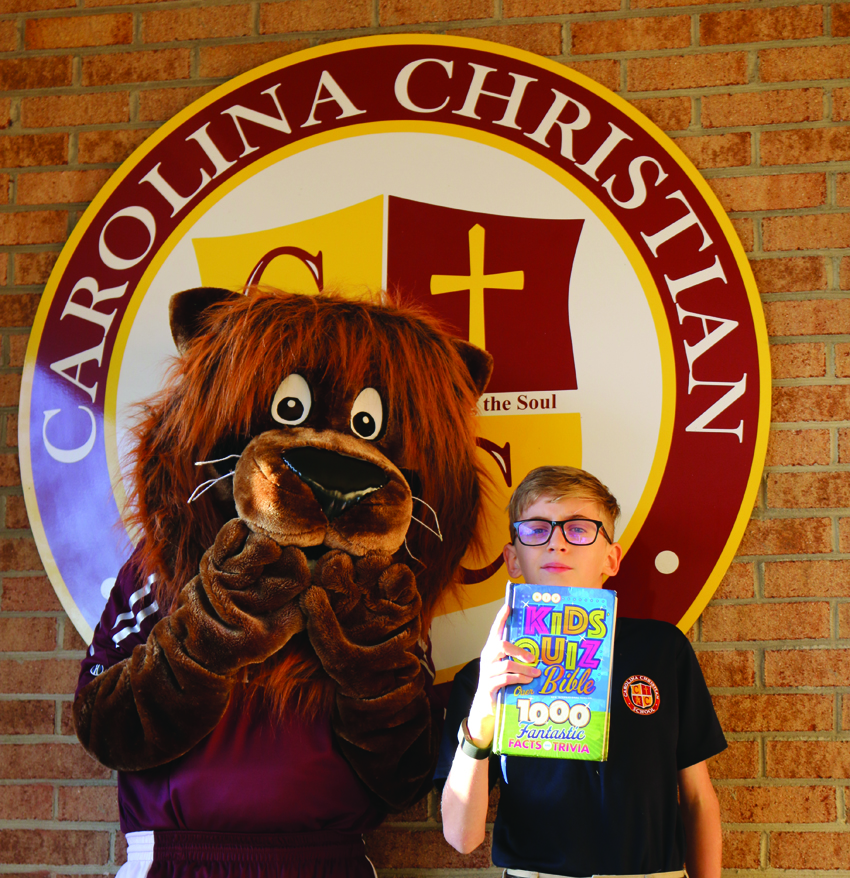 Jesus said calling one’s brother or sister which word could get one in trouble?

What did Jesus say one should store up in heaven?

Jesus said that if someone does not love him, what will they not obey?

These are just a few sample questions Levi Little had to study while he advanced through Christian Schools International (CSI) Bible Quiz Challenge rounds to make it to the North American competition, which will be conducted June 20 at the Museum of the Bible in Washington, D.C.

Little is a fourth-grade student at Carolina Christian School in Locust. The school serves students in Pre-K through 12th grade.

In October, his fourth-grade class competed in the Bible challenge and Little and three of his classmates advanced to the school competition. For the classroom competition, Little correctly answered 24 of 25 questions.

This was the first year the school has participated in the competition. The CSI Bible Quiz Challenge is hosted by Christian Schools International and supported by the NIV Kids’ Quiz Bible and its publisher Zonderkidz, according to its website.

In January, Little took an online test as part of the Southeast regional competition, which consisted of about 10 other states. He answered 60 questions and to the best of his knowledge, he thinks he only missed four questions.

Little and his family did not know how well he did for about two weeks.  His mother Cassie, who’s a middle school math teacher at the school, told him not to get his hopes up, but a few weeks ago,  Little was informed that he won first place in the Southeast region.

Little’s rise to the national competition doesn’t surprise his mom.

“He is super-competitive,” she said, “and has a memory like nothing else.”

Cassie added her son’s biblical knowledge is very high for a fourth-grader because he is a very detail-oriented person and can remember a lot of things.

Often Cassie tries “to keep him in reality” by informing him he might not win it and it’s okay if other people win.

Little has been working hard to get to go to D.C.

Once his teacher sent out an email in September informing parents and students about the challenge and that the questions would come from the Kids’ Quiz Bible, Little immediately told his mom to buy the Quiz Bible from Amazon.

Since October, Little has studied questions from the NIV Kids’ Quiz Bible every day. It features more than 1,000 trivia questions and Little said he already has read through all the questions once and is currently on his second read-through. 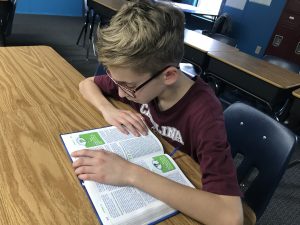 Levi Little studies Bible trivia questions in preparation for his national competition at the Museum of the Bible in Washington, D.C. in June.

“He sets goals and he wants to achieve them and this was one of his goals,” Cassie said.

Little, who has never been to D.C., is excited because the family will make the trip a five-day vacation, filled with many trips to the different museums.

He is excited to explore the National Archives, the White House and many of the monuments.

“I think he’s narrowed it down to 14 or 15 things that he wants us to do within our five-day trip,” Cassie said.

Little will compete against four other regional winners in D.C. The competition will be interactive in nature and will combine questions from the Kids’ Quiz Bible with exhibits at the Museum of the Bible.

Little has a chance to win up to $2,000 in tuition scholarships and up to $500 in Zonderkidz product prizes.

“We are so proud of Levi’s accomplishment and want to wish him the best of luck for the upcoming national competition,” said Jessica Hinson, director of admission and marketing for Carolina Christian School.

Though Little hasn’t met the other four competitors, he’s confident and likes his chances. He especially wants to win because he will not be able to compete in the challenge next year as a fifth-grader.

“I think it’s a great accomplishment not just for him, but for our schools here,” Cassie said.

Little already has lofty plans for his future.

He would love to go into the military as a Navy SEAL and also wants to be a politician.

“This will not be his last time in Washington,” Cassie said.