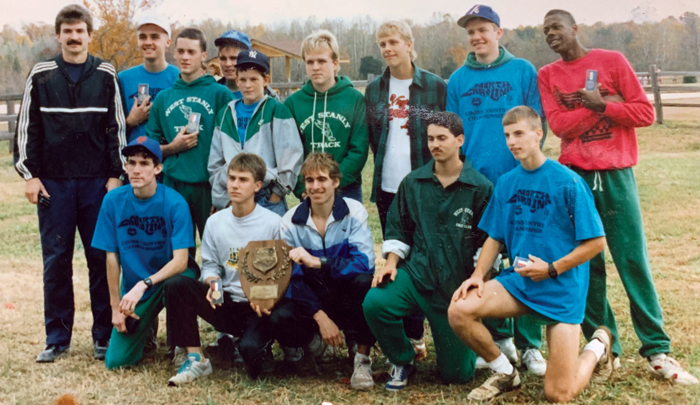 In only its second year as a school sport, the 1988 West Stanly High School cross-country team ran into the record books as it won the 1A/2A state championship.

The team was led by Robert Murray, who was in his second year of coaching the team. He was also a business teacher at the school.

When Murray came to the school in 1986, West did not have a cross country team, so he coached track in the spring.

Being a distance runner, who was still actively running at the time, Murray pushed principal Tom Rogers to create a cross-country team.

Murray’s and Friguglietti’s persistence paid off because a cross-country team was created during the fall of 1987, with a lot of support coming from the West Stanly Booster Club.

To have a good team that can compete for state championships, “you better have some talent and you got to be a little lucky, too,” Murray said.

Luckily for Murray, his team had both.

That inaugural 1987 year, the team finished seventh in the state.

The top five runners that year were Friguglietti, Mike Helms, David Hopkins, Miles Bivens and Billy Greene. They also were the top runners in 1988.

“We knew we were going to be good in 1988,” Murray said, “because we finished seventh the year before and I had everybody back.”

Even though Hopkins ran track his first two years of high school, he grew up playing basketball. But his junior year, with the help of Murray, he discovered cross-country, which soon became his “passion.”

Murray was Hopkin’s track coach during his sophomore season.

“He introduced me more to a training regimen where we would do longer runs,” Hopkins said.

Hopkins said during his sophomore season, he learned to run longer distances of around six or seven miles with Murray.

The 1988 cross-country season started training at the beginning of August, but many of the athletes ran all year and would meet the coach during summer mornings to run, Murray said.

The team ran around 30 to 35 miles a week to prepare for the upcoming season, Hopkins said.

During the summer, Murray took the team to the Hungry Mother State Park in Virginia for a week. The team stayed in cabins, spent time running trails and hung out.

It was during this time the team started setting goals for the year, including trying to make a run at winning the state championship meet, Hopkins said.

But Friguglietti never once doubted the team would win the state championship that year.

There were about 15 runners (all men) on the team that season.

“It was not a big team,” Murray said.

At the beginning of the 1988 season, Murray entered the team in a lot of big meets early in the year to test it. As a 2A school, the team ran against a lot of 3A and 4A schools “to really get pushed,” Murray said.

It was fortunate that all of the runners on the 1987 squad decided to come back and run again, he said.

“As the season went on,” Murray said, “we thought if we stayed healthy and everybody continued to improve and run well, there was no reason we didn’t have a shot to win it.”

During practices, the team would alternate between running long distances (eight to 10 miles) and working on speed intervals, which often involved quickly running 400 meters (about a quarter of a mile) numerous times with limited amounts of rest in between.

Each week the team would gradually increase how many 400-meter runs it would do. By the end of the season members would run around 20 of them during a practice, Hopkins said.

“That was the hardest thing, those workouts,” Hopkins said about the 400-meter speed workouts.

The team would also sprint up and down a steep hill in front of the school.

In a given week, the team probably ran six out of seven days with a rest day thrown in, Murray said.

Even during practice, the runners were always competitive and wanted to try and outrace each other.

But while they were competitive, “we were all really good friends and we enjoyed running and practicing together,” Friguglietti said.

And during each practice, Murray — who was in his late 20s — would run with the team, often at the front of the pack. He would also tell the team stories as they ran.

“He had a story for every subject,” Hopkins said, “and so it made the long runs go by pretty quick.”

Even though he was their coach (and for some, their teacher), because he was so young, he was also their friend.

“I was still faster than all them which made life so much easier,” Murray said. “I tell them all the time the better they got, the better I got.”

And the team’s members always tried to run faster than their coach.

And it was not easy to beat Murray.

“He was just built like the quintessential runner, tall and thin,” Friguglietti said.

“As far as wanting to improve ourselves, all we had to do was look in front of us at our coach, because he was right there,” Hopkins said.

Friguglietti felt pressure to perform for the team, not just because he was one of the top runners, but because he helped create the team.

“I always had to step up and do well,” he said.

“I had perfect attendance my junior and senior year,” he said. “Because if I wasn’t at school, I missed a day of running and I knew my teammates were getting better.”

The team ran one to two races per week, Murray said, often against several other teams in the Rocky River Conference. They would often go and compete in invitationals on Saturdays to get a little more competition.

Hopkins doesn’t think the team ever lost any of the races against other teams in the conference that year.

“We were pretty dominant,” Hopkins said.

West Stanly won its Rocky River Conference meet and soon after the team traveled to McAlpine Greenway Park in Charlotte for the state championship meet.

The morning of the state meet, “I think we expected to win, but we were nervous something might go wrong,” Murray said.

Murray and the team had kept up with other good teams in the state (like Monroe in their own conference) throughout the season so they knew the type of talent they were competing against.

Murray helped the team believe they could win the state championship.

“He had given us that confidence that if we run like we have trained and like we have ran all season, we definitely have a shot of winning,” Hopkins said. “So we were pretty confident going in to it.”

“He basically took a bunch of decent runners and turned us into a state championship team,” Friguglietti said.

When Murray saw his runners come through the two-mile mark, he had a pretty good idea that the team would have a good shot to win the state championship.

“We won by a lot,” Friguglietti said.

After the team won, “it was one of those ‘told you so’ moments” to Principal Rogers, Friguglietti said.

“I don’t know about the rest of the guys, but I never really had any doubt,” he added.

“I finished 10th in the state championship,” Hopkins said, “so I knew if I was 10th, but third on the team, and if the other two guys are where they’re supposed to be, we felt pretty confident.”

Hopkins remembers going up on the stage, being recognized as state champions and how sweet it all felt.

“There was definitely a sense of pride, a sense of ‘wow, we kind of conquered the world,’ ” Hopkins said. “Any time you set a goal, and you realize that goal and you accomplish that goal, it is very rewarding.”

As high schoolers, although Hopkins and his teammates didn’t know what was ahead of them, “at least for right that moment, you’re the best and that’s the feeling we had,” Hopkins said.

The 1988 season had a huge impact on Hopkins life.

He was able to get a partial running scholarship to Pfeiffer College. He ran cross country at Pfeiffer and then transferred to Western Carolina, where he also ran.

“I don’t know for sure I would have gone to college had it not been for running,” Hopkins said.

Murray also had a profound impact on Hopkins.

As a student, he took Murray’s business class and ran for him. And now, Hopkins is a business teacher at Maiden High School and a high school cross country coach at Lincolnton High School, where his son Daniel runs.

“We couldn’t have done what we did without him (Murray) pushing us,” Hopkins said.

Murray worked at West Stanly for about 10 years and then his family moved to Burke County, where he taught at East Burke High School and coached the track team. He later became a school principal.

Murray still lives in Burke County and retired about five years ago. For the last three years, Murray has volunteered his time helping to coach West Stanly cross country as well as indoor and outdoor track.

What made Murray’s 1988 team so special besides natural talent was that they worked extremely hard and “they made running a year-round commitment,” he said.

Friguglietti went to Davidson College and later received his law degree from West Virginia. He is a lawyer in Davidson and lives in Lincolnton. Though he hasn’t run since college, he developed a new sports passion: he’s on the U.S. National Rifle team and has won numerous national trophies.

“I’m actually a better shooter than I ever was a runner,” he said.

One of Hopkins greatest running accomplishments was the first time he finally beat Murray in a race. It was part of a 5K race during his junior year at Western Carolina.

“That was a huge deal,” Hopkins said. “I finally beat my idol.”