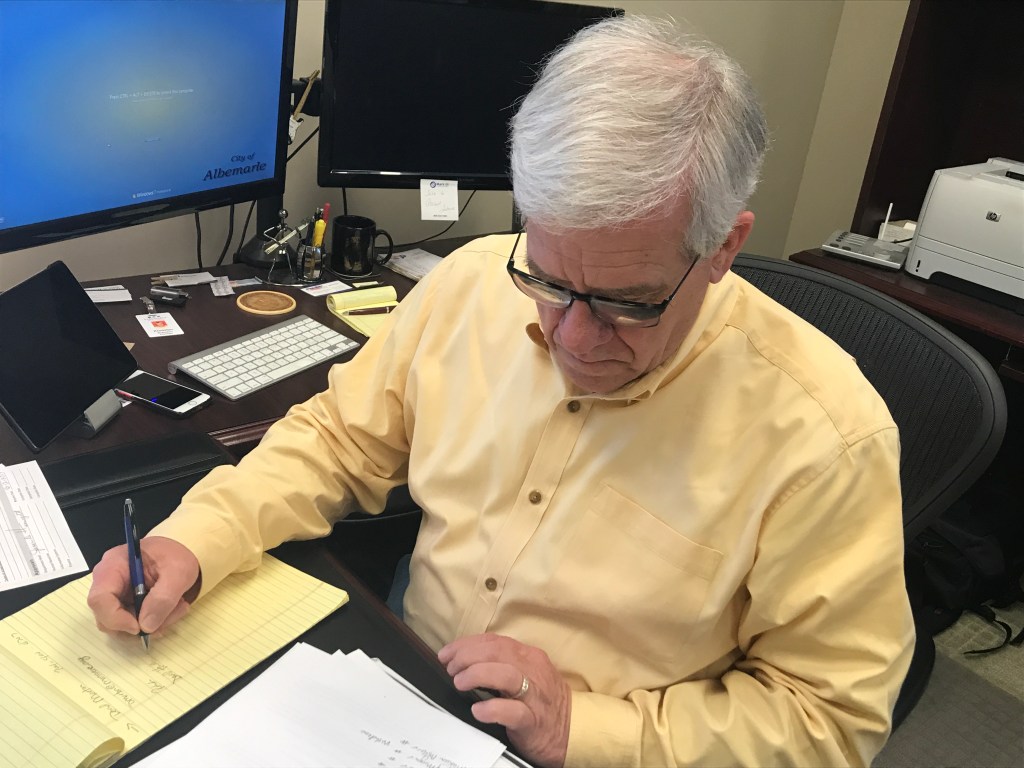 Robert Whitley, head of HR for the city, will retire on March 22.

After more than 25 years on the job, Robert Whitley will soon retire from his role as director of human resources for the city of Albemarle. His last day will be March 22.

After contemplating retirement for several years, he made the decision last February and informed the city council that spring of 2019 would be his time to step down.

“I think it’s just time to move on and change the guard, so to speak,” Whitley said.

Whitley, 64, is currently the longest serving department head in the city. He became head of human resources in 1994, after previously serving as the city’s safety director.

Before that, Whitley was the safety director and personnel manager at Wiscassett Mills.

As head of human resources, Whitley handles a variety of tasks including policy implementation, signing off on new hires and working with an outside company to perform standard background checks on prospective city employees.

The city has actually found a replacement for Whitley and the person will start March 11. Whitley will meet with the replacement to help the person devise a plan to start the job.

But until March 22, Whitley is still working hard.

Whitley will miss the people, especially the 12 other department heads.

“They’re a great bunch to work with,” he said. “We are pretty close and we work well together.”

The biggest adjustment, he said, will be not getting up at 6 a.m. ready to go to work.

Whitley has several plans once he retires.

“Well, the first week my wife is taking me to Myrtle Beach,” he said. “And the joke is she’s taking me to the beach and taking my phone away.”

Once at the beach, he plans to “kick back and relax and not worry about answering emails.”

He is also looking forward to spending time with his five grandchildren and going to their school events.

But Whitley is excited about spending more time pursuing a lifelong passion: music.

Whitley, who grew up in Albemarle, actually got a degree from Western Carolina in music education.

He and his wife, Joy, plan to spend more time in their church band at the Community Church of Mount Pleasant. Joy is the church’s worship leader and the keyboard player, while Whitley plays the bass guitar in the band.

“I’m really anxious to get more involved,” he said. “It’s so much fun. We have such a good time. It makes me feel young to get to play, which I love to do.”

He plays many instruments besides the bass guitar, including euphonium, trumpet, trombone and tuba. He also took lessons in all the woodwind and string instruments.

Whitley and Joy are also huge fans of The Beatles. He enjoys listening to their music while also playing along on his bass guitar.

He has video of all the times The Beatles were on “The Ed Sullivan Show.”

“From time to time, we’ll be working and will just break out in a couple of Beatles songs,” he said. “And you know, it’s kind of fun.”

Some of his favorite songs include “Yesterday,” “Michelle,” “If I Fell” and “Something.”

He and Joy have seen Paul McCartney twice in concert. “That is fun,” he said.

Whitley added that McCartney was “kind of the inspiration for me wanting to play bass.”

Whitley is also a big fan of Chicago, James Taylor and Carol King.

Whitley is also really excited about spending time cruising the streets in his 1965 green Mustang that’s been in his family since he was 15.