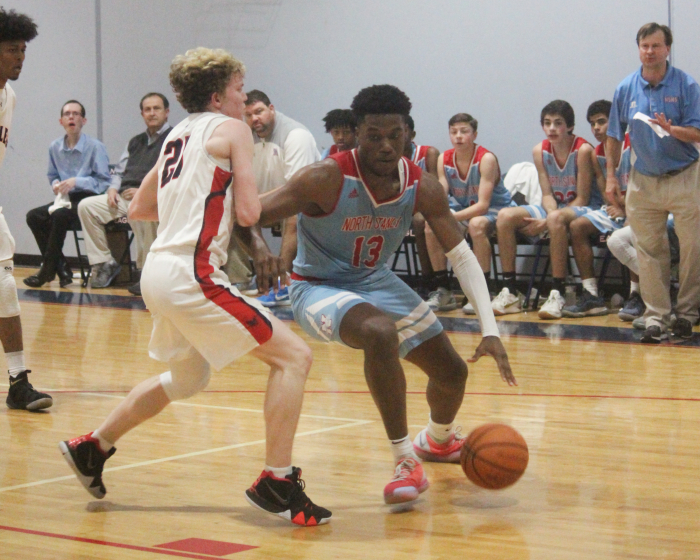 North center Nalik Veasley drives to the basket in the third quarter of the Comets' third-round playoff win at Lincoln Charter. (Photo by Charles Curcio)

The phrase used by the No. 21-seeded North Stanly men’s basketball players after going on the road Saturday night to upset fourth-seed Lincoln Charter was “mental toughness.”

The Comets weathered an early surge and shot lights out for three quarters to down the Eagles 72-53.

Bryson Childress paced the Comets (19-10) with 32 points, moving his career total to 2,164, which according to the NCHSAA record book online would put him 23rd all-time just in front of Anthony Oliver from North Duplin. Childress scored 17 in the first half, five points in the third period and 10-of-12 free throws in the final quarter.

Childress talked about the contributions of Lowder and Veasley in the game, saying “when we get that from Nalik and Carson there aren’t many teams that can beat us because it really opens up the floor for me to do things that gives them opportunities as well.”

Lincoln Charter senior Jackson Gabriel, who was closely guarded the entire evening with a box and one defense by the Comets, led the Eagles with 15, below his season average of 20. Levontae Knox added 10 for the Eagles.

Back-to-back Childress baskets pulled the Comets within three with Lincoln Charter calling for time. Trailing by five in the waning seconds of the first period, Childress drained a deep trey at the buzzer to pull North within two points, 12-10.

Lincoln’s opened the second with back-to-back threes from Axel Holm and Troy Fulton, but North battled back with a 10-0 run. A Veasley three-point play put North up 20-18.

“Coach told me to have a presence in the paint, that I didn’t have to score. I’m not a selfish guy,” Veasley said about his offense and finding Lowder and others on passes out of the paint.

Gabriel’s first shot of the game was a long 3-pointer which turned into a four-point play and gave the Eagles their final lead in the game. North outscored Lincoln 13-4 over the final three minutes to lead 33-26 at halftime.

Childress said he and his teammates have become mentally tough over the season. Instead of sitting back and going down then having to play catch-up the whole game, which they may have done earlier in the year, he added, “we have some tough guys on this team who love to compete.”

As such, North continued to extend the lead to double digits in the third quarter and limited the Eagles to 3-of-13 in the period to build a 50-35 lead.

The Comets’ lead never dipped below 13 in the final quarter as North only took eight shots while running large blocks of time off the clock, forcing the Eagles to foul.

“(Lincoln Charter) was undersized compared to (Veasley)…he’s a big body down there. We just kept feeding him ball, everybody would crash and then it would just give up open opportunities for everybody else,” Lowder said.

“It feels good to come into their house and get a win,” Veasley said.

“We last two days about how good they were in transition. We had to get back and stop easy buckets,” North coach Paul Childress said, which the Comets started doing after the first four minutes of the game. “They are very well coached and are tough kids…we knew if we lined up and played straight defense they would cut us to death and (Gabriel) would get shots.”

Regarding the win, Coach Childress said his team “made some shots, made some plays and got awful lucky to get out of here with a win.”

With Bishop McGuinness’ upset of top-seeded Winston-Salem Prep on Saturday, 56-53, the Comets will travel to Kernersville Tuesday to face the Villains in the Elite Eight fourth round of the 1A state playoffs.