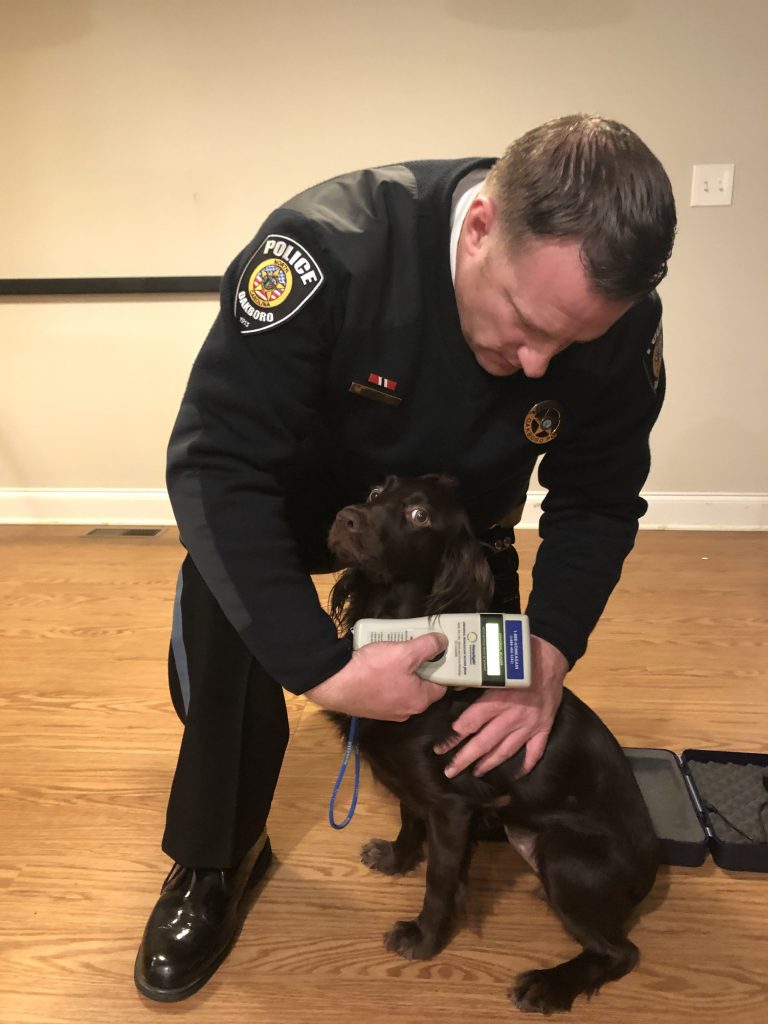 The Oakboro Police Department recently found a new way to reunite runaway dogs with their owners.

With the help of the Greater Oakboro Business Association (GOBA), the department recently purchased a microchip scanner to quickly scan a dog’s implanted microchip to match the dogs with their owners.

Police Chief Thomas “T.J.” Smith said before the scanner, when the police found lost dogs, they would give them water and hold them at the station while they put the dog’s information (including a picture) on Facebook and other social media outlets. They even kept one dog recently for 12 hours, Smith said.

Smith’s own dog, Sadie, who has a chip and was a runaway he found on the side of the road as a puppy, inspired him to look into purchasing a police scanner to help reunite lost dogs with their owners.

Smith called local veterinary offices, including Bear Creek Veterinary Hospital (which has their own chip scanner), to learn more about chip scanners.

Smith then presented his plan for a scanner during a recent meeting of GOBA. The group ended up purchasing a $350 Universal Wordscan Reader Plus scanner from the microchip company HomeAgain. The police department has had the scanner for about three weeks, Smith said.

The good thing about the universal scanner is it can read any type of chip, Smith said.

Once a dog (or any animal) is scanned, a number will appear on the scanner and the officer types the number into a specific website to reveal the company that created the chip. Then the officer calls the company, which provides an address for the dog.

The scanner “will help us return the dogs in a faster fashion,” Smith said.

To the best of his knowledge, Smith doesn’t know of any other local police departments that have a microchip scanner.

He wants to have a Microchip Day, where citizens can come and have their animals chipped by veterinarians. Chips are usually placed in the nape of the animal’s neck.

If a person is moving locations, Smith said, they can go online to the company’s website and update the address for their dog’s chip.

The scanner “is just another tool in the tool belt that can help officers show care for their towns,” Smith said. It’s a great example for the police to go the extra mile for their citizens to show that they care, he added.