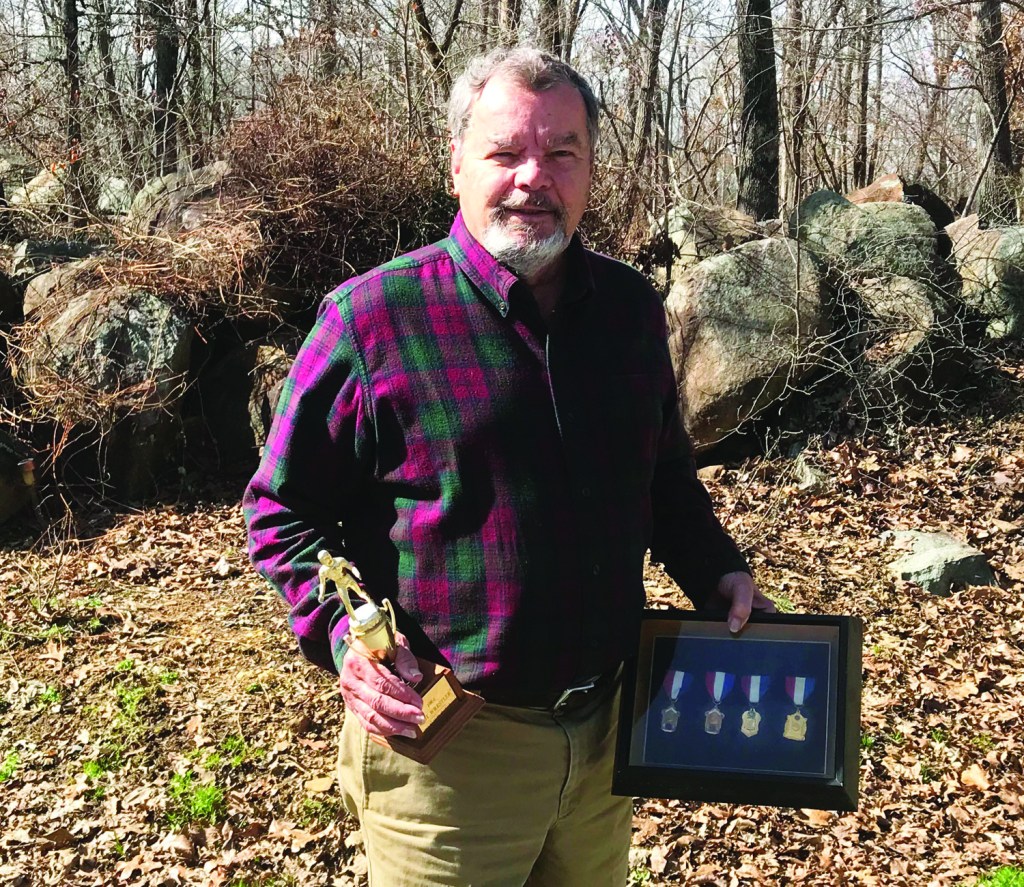 Photo by TOBY THORPE/staff Kenny Furr displays his four state wrestling medals and the MVP trophy he won in the 1961 Western North Carolina High School Athletic Association tournament. He said his wrestling training helped him stay in shape later on in the Marines and helped his focus on his current role with his business, Stony Mountain Vineyards.

In the fall of 1957, Albemarle High School was coming off its second Western North Carolina High School Activities Association football championship, the final one under legendary coach H.T. Webb, and preparing to transition into the ’57-‘58 winter sports season, which in previous years had consisted of basketball alone.

But this year, Albemarle High would begin competition in a sport relatively new to high schools in that day: wrestling.

Don Knotts, a former Duke University footballer and assistant coach with the AHS gridiron program, was tabbed as head coach of the new team.

Despite first-year program status, the squad included a number of wrestlers who realized near-immediate success.

Among these were senior Al Fusonie (named as the season’s outstanding wrestler by the WNCHSAA) and Jeff Hartsell (a future wrestling standout at The Citadel), along with 98-pounder Ken Furr, who, despite being a freshman with no prior mat experience, captured the WNCHSAA championship in his weight class.

“I loved all sports,” said Furr recently from his business, Stony Mountain Vineyards, “but I was too small to play football or basketball, and once I became interested in wrestling, that was pretty much all I wanted to do.”

“I found out that I enjoyed it, and really took to it,” he added.

“The demands of the sport helped me stay in great condition, which required self-discipline. The wrestler in better shape usually wins, so I tried to make sure I was always in the best physical condition I could be.”

Furr also noted that the entire 1957-58 team was experiencing the sport the first time, and even Knotts and Calloway were coaching wrestling for the first time.

“It was brand new to all of us except for Dr. Wolf, who had wrestled at Ohio State,” said Furr. “But we learned the sport together and did pretty well.”

And over the next three seasons, Furr proved that not only had he learned the sport well that first year, but was continuing to develop and improve his skills.

According to The Stanly News & Press reports, Furr won the 103-pound weight class by decision as a sophomore in the WNCHSAA tournament held March 1, 1959 at Statesville High School.

One year later, he repeated the feat in the 112-pound category, winning by decision in the tournament finals at Kannapolis High.

As a senior, he captured his fourth straight crown at Davidson College in the 120-pound class, pinning his opponent only 59 seconds into the championship match on Feb. 28, 1961.

In addition, he was honored as the WNCHSAA’s Outstanding Wrestler for the 1960-61 season, becoming the second AHS athlete (besides Fusonie in 1958) to earn the honor.

Moving from high school to college, it was inevitable that the AHS grappler would participate at the next level. But, there was some question as to where he would next compete.

“Coach Wallace Martin was in charge of the Pfeiffer wrestling program at that time,” said Furr. “He recruited me, and offered me a scholarship.”

But at the time, Pfeiffer was only a junior college, and Furr had set his sights higher.

“I had always wanted to go to UNC,” he said, “and Dr. Webb, who was our principal then, made arrangements for me to visit the campus and meet with the admissions office and the wrestling coach.”

At Carolina, however, Furr found that getting into and through the school would be tougher than as an athletic scholarship student at Pfeiffer.

“Mr. Sam Barnes was the wrestling coach then, and he had a policy not to give scholarships to wrestlers. He felt they should be students first.”

“Then, the admissions office people told me they could not provide any financial assistance the first year. So, I worked my way through that year, and earned a U.S. Navy scholarship the next.”

With the Navy helping bear expenses for the next three years, Furr was able to concentrate on wrestling as well as his studies.

He became a leader of the Tar Heel mat squad, serving as a co-captain his senior year while wrestling in the 134-pound class.
Having accepted the Navy scholarship, Furr was committed to military service following graduation, and he answered the call immediately.

“I graduated in 1965 and was commissioned as a second lieutenant in the U.S. Marine Corps,” he said. “And it wasn’t long at all before I was in Vietnam.”

“I did three tours in Vietnam, and managed to get myself shot three times,” Furr added. “Second lieutenants usually didn’t live very long.”

But he did live, and remained in the Marines until he retired in 1995.

Along the way, Furr served as an infantry platoon leader and an infantry company commander, moving up the ranks to colonel before retirement.

“I was on active duty for 10 years, and served 20 years in the reserves,” he said, “but as a reservist I was more involved than the typical weekend warrior. I ran exercises in Norway and Thailand during that time, and retired as a deputy commander at Camp Pendleton.”

According to Furr, the lessons learned on the mat at AHS and UNC served him well as he served the country.

“The sport demands that a wrestler be in outstanding condition,” said Furr. “In high school, you are going all-out for six minutes (three two-minute periods). In college, it goes up to nine minutes. And since the Marines place great emphasis on a soldier’s physical condition, wrestling helped get me ready for service.”

The business is a family venture with Furr, his wife Marie, son Devron and daughter Laura all serving in various roles.
But sweet memories of his years as Albemarle High School’s first four-time wrestling champion remain.

“When I got that award (WNCHSAA Outstanding Wrestler for 1961), the team carried me off on their shoulders,” said Furr.

“That was a moment I’ll always remember.”