CHAMPIONS OF STANLY COUNTY: Mistake fueled Chambers to become one of the greatest athletes in Stanly history 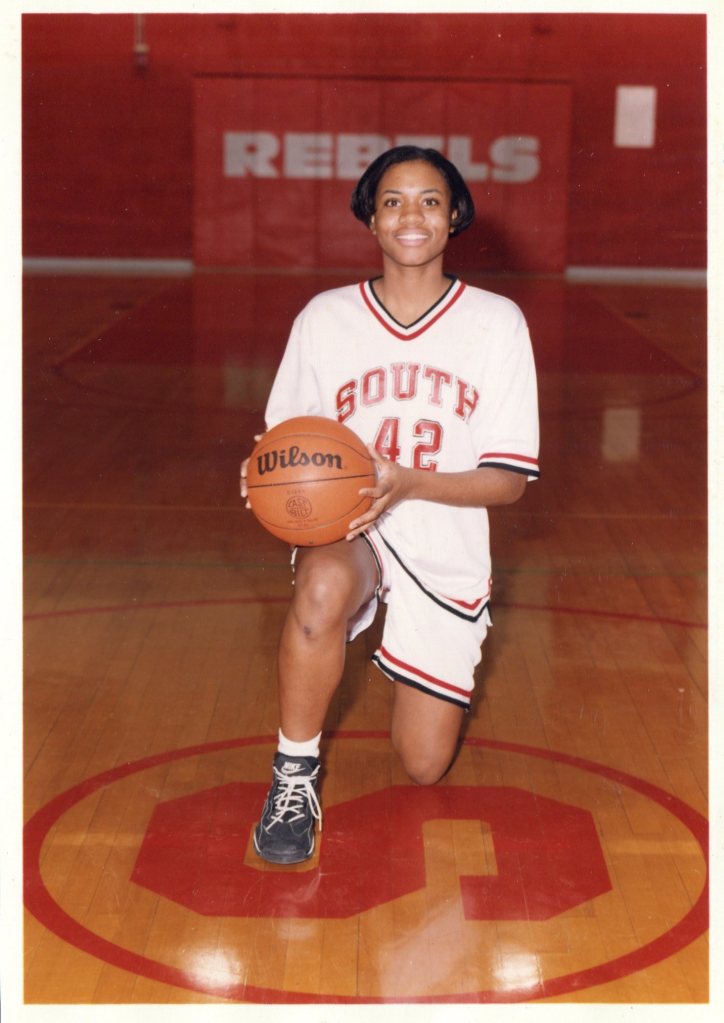 Chambers during her senior season.

Every great superhero — or, in this case, superstar athlete — has their own unique origin story that helps create the legendary person that they became.

For Latoya Wilson Chambers, her origin story occurred in the middle of a game during her seventh-grade year at South Stanly High School around 1989-1990.

She was on the girls’ basketball team. It was really her first time playing ball. She was still uncomfortable with her height and shy, but her parents pushed her to try out for the team because she was so tall.

“She had this complex about her height because she was taller than all the guys,” mother Theresa Watkins said. “She used to complain to me, she’d say, ‘I’ll never get a boyfriend or a husband when I grow up because I’m too tall.’ ”

“I said, ‘well they’re going to catch up with you,’ ” Watkins said.

But basketball was in Chambers’ genetics.

Basketball “was just an inherited trait, I guess,” Watkins said.

Though she was always tall, Chambers had never been truly interested in playing basketball until she tried out and made the seventh-grade team. As a young child, she enjoyed playing with Barbie dolls and dressing up, Watkins said.

During her seventh-grade season, her team was playing New London Middle School and during the game the unthinkable happened: Chambers scored a layup on the wrong basket and scored two points for the other team.

“I was truly embarrassed,” Chambers said.

She remembers the middle school boys laughing after the mistake.

“You got to be aware when you’re on the court,” she added.
But that moment also sparked in her a drive that would take her to heights few athletes ever achieve.

“From that day moving forward,” she said, “I knew that I wanted to become the best basketball player that I could be and I vowed that I would never make the same mistake.”

The next summer, her father installed a basketball goal on a light pole in her backyard in Norwood. She played ball each day with many of the local boys.

“My dad and mom both wanted me to get better because I guess they saw I had the potential,” Chambers said.

“That was the neighborhood goal,” Watkins said. “The boys would push and they would play hard and she would be right there with them.”

On a typical Saturday and Sunday, there would be about 15 boys that would be shooting with Chambers in her backyard, Watkins said.

“I worked hard that following summer by practicing and playing every day,” Chambers said. “I would just shoot and worked on ball handling, visualizing myself in game situations.”

She learned many moves from the boys she played against including the drop-step and pump fake, which helped give her a scoring advantage.

“Being the only girl playing with guys made me stronger,” Chambers said. “I realized that playing with males I had to be smarter and outwit them and that’s how I developed my jumper, developed post moves and learned that I had to box out in order to get rebounds.”

She relentlessly worked and refined her craft. Her seventh-grade mistake fueled her, and her abilities, drive and talent kept rising until she eventually became the all-time leading scorer (for both men and women) in Stanly County history, having totaled 2,042 points. It was a record she had for 22 seasons.

Even during her basketball career in middle school, Chambers stood out and she attracted the attention of her future high school coach.

“It was easy to tell when Latoya was in seventh-grade that she was going to be a really good player,” high school coach Greg Speight said.

He ended up coaching Latoya all four of her high school years.

“Her technique and her jump shot were basically perfect,” Speight said.

Her potential, he said, was “a lot to look forward to.”

Her eighth-grade team was almost undefeated during the season, losing only to Oakboro. The team finished as regular-season co-champions with a 14-1 record. It was a tough loss for a team that was used to winning, she said.

But during her eighth-grade season, she also attracted the attention of the Lake Norman Lady Lakers AAU team. She played with them the summer before high school and stayed on through her high school career.

As a player, Chambers looked up to Nikki McCray, a guard from the University of Tennessee, as well as Tennessee’s coach, Pat Summitt. She also liked Duke’s Grant Hill.

As a freshman, Chambers immediately tried out and made the high school girls varsity team. She was a starter and the only freshman on the team. She played power forward.

“It was a foregone conclusion she was never going to play JV,” Speight said. “She could have started on varsity in eighth-grade.”

Chambers was about 5-foot-10 during her high school years, taller than most of the girls she was competing against.

Because she had already played AAU ball, “there was no deer in the headlights situation” when she started for the varsity team, Speight said. “She was ready when we put her out there.”

Chambers averaged about 12 points a game her freshmen year. She also had the best field goal percentage on the team.

Speight thought it would take Chambers longer to acclimate to playing high school ball, but she was ready from the beginning.
She started every game her freshmen year, but she had more of a backup role because the team had many experienced seniors.

Her team won the conference championship and made it to the state semifinals before losing a close game to Hayesville in overtime.

Starting her sophomore year, Chambers emerged as the best player on the team. Though she was never a vocal leader on the court, she led through her play, Speight said.

“She could shoot an outside jumper, she could post up, she had good size, she could handle the basketball, you could play her almost anywhere and she’d be hard to stop,” Speight said.

During her sophomore year she also began receiving basketball scholarships from schools such as Virginia Tech, Wake Forest and Old Dominion.

Chambers was named the Central Tarheel 1A Conference Player of the Year for both her junior and senior seasons. Chambers averaged 20 points a game during those two years.

She also grabbed more than 900 rebounds during her career.

A huge milestone for Chambers occurred on Dec. 7, 1994, during her junior year, when she scored her 1,000th point in a 54-36 victory over Mount Pleasant. She finished the game with 14 points.

The thing Speight remembers most about Chambers is her consistency.

“She brought it every night, there were very few bad games,” he said.

Chambers agrees with her coach.

“My consistency is my biggest accomplishment,” she said.

Her parents always instilled in her that academics came first.

“I was always more concerned about her academics,” Watkins said.

Her mother wanted Chambers to work hard in the classroom so she could eventually receive an academic scholarship.

Chambers’ best friends on the team also competed against each another in the classroom to see who could earn the highest grades, Watkins said.

One thing that helped Chambers stay in good shape when she wasn’t playing basketball was volleyball, which she played all four years.

“My family always played volleyball during cookouts, family reunions and it was actually my first sports love,” she said.

“Volleyball helped keep me in shape because I had to use jumping skills and hand-eye coordination was really important which carried over to basketball.”

She also competed for two years in track.

Her biggest milestone of her career was when she scored her 2,000th point. She did so in a road victory against Chatham Central on March 9, 1996.

“I’m so glad. What better way to have your senior year, getting 2,000 points and going to the regional,” Chambers said after the game, according to an issue of The Stanly News & Press.

“I was very proud of her,” Watkins said. “She started out wanting to get better and she just outdid herself. She put forth a very good effort.”

Looking back, Chambers acknowledged that while she was happy to achieve the milestone, “it wasn’t a big deal to me because as long as we were winning, scoring wasn’t my main goal. I was just having fun and being a baller.”

She didn’t even realize she was anywhere close to scoring that many points, until Chatham Central temporarily stopped the game to acknowledge the achievement.

Chambers added that by scoring 2,000 points, she was “happy I had made my parents proud.”

Chambers wanted someone to break her scoring record — but she especially wanted a girl to do it.

“I would want a girl to get it before a guy gets it,” she said. 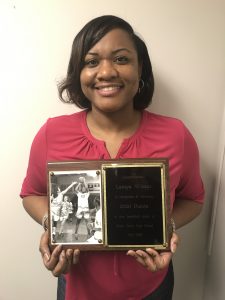 Chambers holding a plaque she was given in recognition of scoring 2000 points.

Unfortunately, her senior season ended just like her freshmen year: with a loss deep in the playoffs to Hayesville.

Her team lost 58-43 to Hayesville in the 1A regional semifinals. Chambers scored 28.

She and her teammates cried after that game because for many, including Chambers, their high school careers were over.

The biggest regret of her high school career is not winning at least one championship ring.

“I always felt like we had the teams that could have won at least twice during my high school career,” she said. “I would have given up the scoring record to have just won at least one ring.”

Chambers received a full basketball scholarship to North Carolina A&T State University in Greensboro and she played all four years.

But it was not easy.

“When you play at the college level, it’s a whole new ball game,” she said. “In college, you’re playing against all the big fish from across the country.”

One of the biggest changes was adjusting to preseason workouts. After having a decent freshmen year, Chambers injured her right ankle during the preseason of her sophomore year.

“That injury really took something out of me,” Chambers said, “but I didn’t let it stop me from being aggressive and playing my heart out.”

Still, the team struggled and lost more games than she was accustomed to in high school. Chambers also didn’t get as much playing time as she did at South Stanly.

“We had lost a lot of games and so basketball wasn’t as fun to me because I was used to winning,” she said. “It was so exhausting and draining” losing games.

“She had to readjust” in college, Watkins said. “Latoya learned to say ‘well, I’m going to do what I can while I’m out there.’ ”

But college definitely had its upsides.

Chambers received her degree in public relations in 2000 and later received her master’s in public administration from the University of North Carolina at Charlotte.

She worked in social services in Charlotte for about 10 years before moving with her family to Durham in 2011. She works for the Durham County Department of Social Services as an applications program manager.

“Basketball taught me to be tough and to never let anyone tell you that you can’t,” she said. “If you work hard at something and never give up, eventually things will work out.”

She added “teamwork, being consistent and being able to roll with the punches are all things that I utilize while being a wife, mother and working woman.”

Though she doesn’t come back often, Stanly County will always be her home.

“I learned to play basketball in Norwood on Kendall Street in my backyard,” she said.