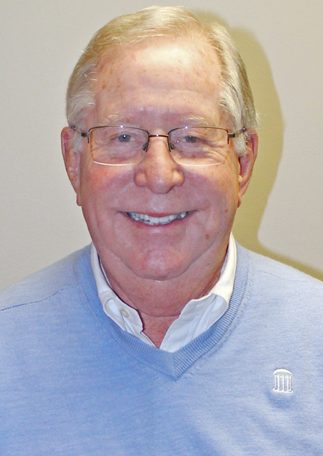 The annual Atlantic Coast Conference men’s basketball tournament has seen a variety of different iterations over the past 66 years, whether it be multiple venues, outstanding players and coaches or a high level of competition.

One constant the tournament has always had, unbeknownst to many in attendance at those tournaments, has been one UNC Tar Heel fan from Stanly County who has been to every one of them since 1954.

Local attorney Charles Brown has been attending the tournament since its inception in the spring of 1954 and has attended games at each one since, with this week’s tournament kicking off Tuesday at the Spectrum Center in Charlotte.

Seven schools from the Southern Conference left to form the ACC on June 4, 1953: Clemson, Duke, Maryland, North Carolina, North Carolina State, South Carolina and Wake Forest. Those seven charter schools were joined by the University of Virginia in December 1953, before the first men’s basketball tournament in Raleigh in March 1954 when N.C. State beat Wake 82-80 in overtime.

Even before then, the Browns had gone to see the Southern Conference tournament at Reynolds Coliseum in Raleigh because of a connection Brown had with someone playing in the tourney. Frank Silva, an All-American standout for Furman, was his camp counselor one summer. So he was able for around a dollar to attend the game and walk right up to courtside as 10- and 11-year-olds with his brother to get autographs.

Not only did he and his family go to the SoCon Tournament but also the annual holiday tournament, the Dixie Classic, also played at Reynolds Coliseum in Raleigh.

The tradition of attending college basketball tournaments continued into the early years of the ACC, but bucking the trend of his father, who went to undergraduate school at Duke, Brown pulled for the Tar Heels.

Franchot Palmer, who lived across the street from the Browns, was a mentor to Brown early on in life. Palmer’s father was a member of the Rams Club, the athletic booster club of UNC-Chapel Hill. Palmer helped Brown continue to get tickets through his high school years.

Brown continued to go to games while attending UNC-Chapel Hill on a Morehead Scholarship, where he earned a bachelor’s degree in business administration. He eventually graduated with a degree from the UNC School of Law in 1966.

“The university has been very good to my family,” Brown said.

Brown has seen the tournament in its various locales, from as far south as the Amalie Arena in Tampa to the past two seasons at the Barclays Center in Brooklyn.

The tournament left Reynolds in 1966, as Brown was graduating from UNC School of Law, switching to Greensboro. He said the tournament should be there “forever” adding Greensboro “is midway up and down the East Coast. I think of it as a neutral site; 15 other schools think it’s a home court for the Tar Heels.”

If he had to pick a tournament outside of Greensboro in which a city “really rolled out the red carpet,” as he put it, it would be the 2007 year when Tampa hosted the tournament and Carolina beat N.C. State in the finals.

One thing this year’s tournament in the Queen City will not have for Brown and many others will be a meal at Stamey’s Barbeque in Greensboro. Brown said he would eat there and just listen to all the fans talk ACC basketball.

“I knew I was there for the purpose of seeing good basketball,” Brown said.

While admitting he may not have seen every game teams like Clemson or Boston College may have played in the ACC tournament, one school’s games he has never missed are those of his beloved Tar Heels.

He said the best games he has witnessed in those previous 65 tournaments involved Carolina winning, but mentioned in particular the 32-0 undefeated 1957 team coached by Frank McGuire. That team beat South Carolina for the ACC title and went on to win the national championship over Wilt Chamberlin and the Kansas Jayhawks in a 54-53 triple-overtime game.

Brown also recalled the teams under Dean Smith from 1967-69 who all reached the NCAA’s Final Four. He added he loved “watching the Dean Smith strategies develop.”

He also mentioned 1989 as a favorite ACC tournament from the Omni Arena in Atlanta, when Carolina beat Duke in the finals and J.R. Reid was named as the tourney’s Most Valuable Player.

Brown’s least favorite venue was in Atlanta as well but was across the way from the Omni at the home of the NFL’s Falcons, the Georgia Dome.

“Atlanta meant well, but they were just not geared to serious basketball,” he said.

Last year’s tournament in Brooklyn was difficult, Brown said, because of the wintry weather. He left a day early to get up there before the storm and had to buy some boots because of the ice and snow.

“We’ve had a great time reminiscing with these folks about basketball. We’re not the sorts that would throw a beer can at the TV…we just know good basketball when we see it. Some of the best tournament basketball were games in which Carolina did not play,” Brown said.

He recalled specifically the N.C. State-Maryland game in 1974 where two of the nation’s highest ranked teams played for one spot in the national tournament. The Wolfpack beat a Terrapins team with six future NBA draft picks in overtime, 103-100.

“I respect good basketball from other schools, but no one ever doubted my loyalty,” Brown said.

Along with legendary players wearing the Carolina blue and greats from other schools, Brown enjoyed seeing the personalities of the various head coaches whom have worked in the tournament.

“It was something to watch,” he said.

His own family, including his sons Palmer and Courtney, have also attended many games at the tournament with him; both were honor graduates from Carolina. Brown joked when both were in school between the fifth and eighth grades, both came down with “mysterious” sickness right around the time of the tournament.

“The tournament was good medicine,” he said.

The Tar Heel fandom for the Browns even goes to the next generation as his older granddaughter, Lucy Brown, is a big Carolina fan as well.

Brown will be in attendance this week at the Spectrum Center, clad in his Carolina gear as the No. 2-seeded Tar Heels play in the quarterfinals Thursday.

The love for his Tar Heels was best illustrated in a story told about his family. Having told his children for years going to the tournament was like going to Heaven, his sons were listening to the children’s message at church one day. When the preacher asked where people go when they die, Palmer answered with the following: