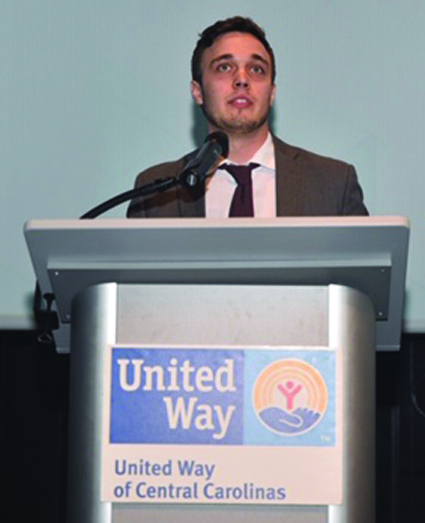 Greg Asciutto was recently recognized by the United Way of Central Carolinas.

United Way of Central Carolinas announced the winners of the inaugural Young Leaders Awards during a ceremony at the NASCAR Hall of Fame.

A total of eight individuals and groups were celebrated for their work and dedication to the greater Charlotte community.

The event was presented by TIAA and hosted by United Way’s Young Leaders group.

Four years ago, Asciutto left Los Angeles to teach in Charlotte with a commitment to take a more active role in improving the education of at-risk youth and combating poverty through work in the public school system.

Since then he has been recognized by Charlotte-Mecklenburg Schools as “Teacher of the Year” and has received the “Distinguished Service” award from the program directors at Johnson C. Smith University.

His most recent project began last summer with an initiative to improve education statewide by connecting rural and urban teachers.

The Young Leaders Awards were created to recognize standout young professionals and groups making a difference in the community — from civil servants and neighborhood champions to nonprofit professionals and social innovators.

Following a multi-round vetting process involving United Way staff and the Young Leaders Council, the eight winners were chosen from more than 125 nominations from the community.

“Throughout the nomination process, our team was inspired by the number of young professionals committed to diverse causes across our community,” said Bo Hussey, chief marketing and technology officer at UWCC. “Their bold vision and leadership early in their careers highlights what is possible when someone is committed to pushing their community forward.”

United Way’s Young Leaders are a group of young professionals ages 21-40 collaborating on philanthropic, volunteer and leadership initiatives. Members advocate for the health and well-being of our community’s children and families, while creating innovative engagement and educational opportunities in the areas of health care, mental health, nutrition and fitness.