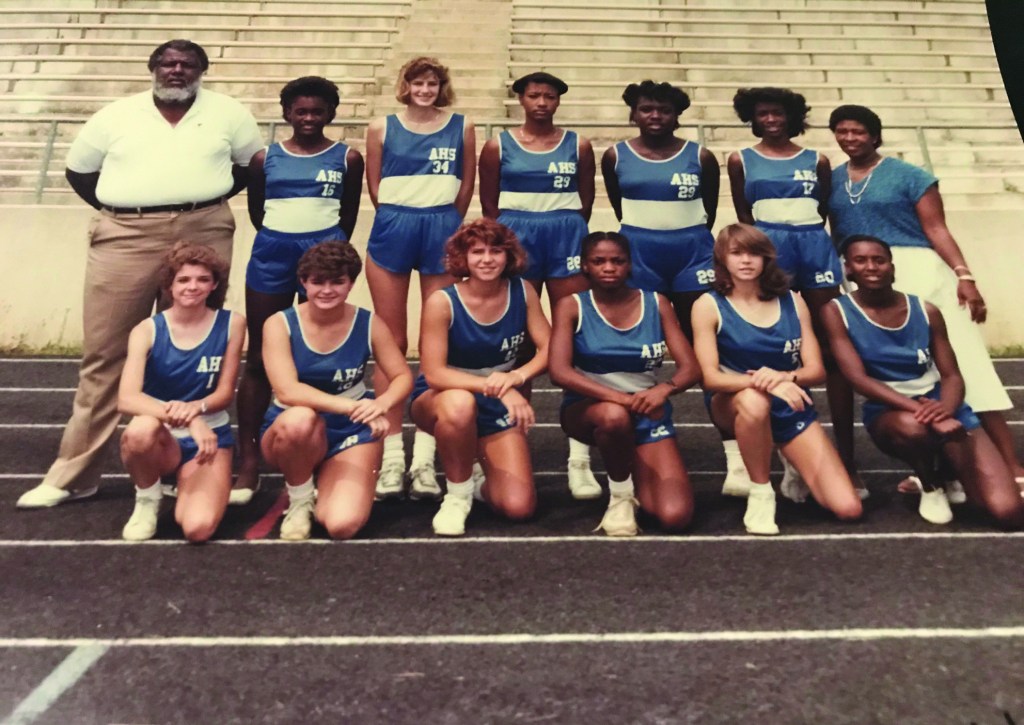 Both years the team was buoyed by their track Swiss army knife, Tafoya Taylor Pinder.

Pinder ran the 100-meter dash and 200-meter dash, she competed in the long jump and triple jump and she anchored the mile relay and the 4×400-meter relay.

“I was a natural born runner, but I didn’t like running,” Pinder said.

“I didn’t want the hard work” of running, she added.

She learned to enjoy running with the help of her track head coach, Agnes Maske.

“She taught me to see the value in myself,” Pinder said.

Pinder started running track her freshmen year in 1985, and although there were many fast, experienced runners, “I could outrun them and I wouldn’t do it.”

But Maske gave her some valuable advice.

“You don’t have to hold back because of people,” Pinder said she told her. “Nobody’s going to be mad.”

In helping Pinder, it was a matter of helping gain confidence in herself, Maske said.

Her first love was basketball, but “I was better at track,” she said.

Maske, who was also a business teacher at the school, starting coaching track for the school in 1981. She first got into track while taking her son to better his skills with the Charlotte Striders, a summer league track squad.

At the beginning of the year, Maske and assistant coach Paul Kluttz would time the girls in a variety of events to see where they were best.
Maske coached the runners, while Kluttz coached the field players (shot put, discus, etc.).

Maske did not mess around during practice, Pinder said.

For example, if athletes did not stretch or did not have proper attire, they would not run, Pinder said.

Maske was also a great motivator.

While the team was on the bus going to meets, Maske would have the girls visualize their events, and think about what they were going to do and what they wanted to do, she said.

Maske always pushed the girls to go over and beyond what they thought they could do, runner Tomeika Moses Morrison said.

Morrison ran track beginning her freshmen year in 1986. She grew up running around her neighborhood, so she knew track was something she wanted to do.

When runners knew they were approaching the final curve, sometimes they would slow down and — as the saying goes — the monkey would inevitably jump on their backs. But Maske would tell them to “fight that monkey off your back and keep pushing,” Morrison said.

When that monkey gets on your back at the end of the race, you should have reserved enough energy to make it to the finish, Pinder said.

But the team relied on faith to help it during the season as well. Maske would always tell the girls, “When you’ve given it all you got, you’re waiting on God to give you more.”

The team went to as many invitational meets as they could throughout the season to run against 4A teams which gave them “a higher level to run against and prepare,” Maske said.

Morrison ran the mile relay and the 4×400-meter relay along with Pinder.

The girls usually could not outrun Pinder.

“If you got to run with her, she pushes you because she’s going to go, so you have to keep up with her,” Morrison said.

“She was our fastest and strongest sprinter,” Maske said of Pinder.

Pinder brought flexibility because the team could count on her for points in the sprints because of her speed, but she could be added to any leg of the relay teams as well, Maske said.

Pinder felt the pressure of being the anchor for the relay teams. Knowing she was the fastest runner, she did not want to let her teammates down, she said.

Pinder had a rivalry with Detra Watkins, of North Stanly, who ran most of the same events as her and they often ran in the state championship meets.

“We were the rivals of Stanly County,” Pinder said.

They would bring out the best in each other, but they both wanted the other to succeed at the state meets because it meant good things for the county, Pinder said.

Pinder felt she did better at her individual events (long jump and triple jump) at the conference meets, but she always did better with the relays at the state meets. 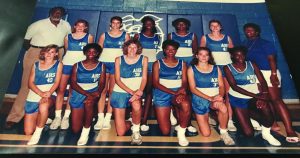 The team would read the local newspapers to learn about competing teams and would often place runners in different events based on the strengths and weaknesses of the opposing teams.

“We would do our homework,” Maske said.

At the 1986 Western N.C. 1A-2A high school track regionals at North Rowan High School, Albemarle beat Hendersonville 69-52 for first place. Pender placed first in the long jump and second in the triple jump, and Mary Frick placed first in the high jump. Both ladies qualified for the state meet.

Also the mile relay team — consisting of Pinder, Latia Pemberton, Sabrina Wallace and Crystal Moore — finished third in the regionals but qualified for the state meet, along with the 4×400-meter relay team of Pinder, Pemberton, Morrison and Oveda Hunter, which finished first.

The team’s big moment occurred on May 27, when the girls captured the 1A-2A State Track Championship at the University of North Carolina at Chapel Hill, narrowly defeating second-place Swansboro 37-34.
In the 1986 state championship meet, Pinder competed in the long jump, 100-meter dash, the mile relay and the 4×400-meter relay.

Albemarle won only one event, with Pinder winning first in the triple jump. She also took third in the long jump, while the mile relay and the 4×400-meter relay teams each took third place.

History repeated itself in 1987: The team finished first in the 1987 Western N.C. 1A-2A high school track regionals, beating second place Salisbury 72-61. Pinder placed first in the long jump and second in the 400 meters. The mile relay and the 4×400-meter relay teams also qualified for the state meet.

The team repeated as 1A-2A state champions May 29, when it defeated second-place Salisbury 52-40 in the championship meet at the Paul Deer Track on the campus of N.C. State University.

During her time competing in track at Albemarle, Pinder set school records individually for the long jump, triple jump, 100-meter dash and 200-meter dash. Her team also had the school record for the mile relay and the 4×400-meter relay.

But it wasn’t always rosy for Pinder. There were some bumps along the way.

One year, Pinder remembers she was clearly acting up and she did not want to run. Maske told her she did not have to run on the team and Pinder went home.

Pinder did not run for a whole week and felt so bad. Maske actually went to her home and talked with her mother.

Maske told her mom that Pinder was talented, but she would not beg her to run, and that she was letting her team down by not running.

After Maske spoke with her mother, Pinder went back and apologized to the team and Maske, and they accepted her back.

“From that point on, I didn’t look back,” she said.

Maske was phenomenal, Pinder said, in that she never took sides and had favorites.

“If you were her favorite, you didn’t know it,” Pinder said.

Pinder first discovered she loved running her freshmen year when her basketball coach, Bob Johnston, told her to find another sport to keep her busy when she was not playing ball.

“He said always try to keep yourself in more than one sport,” Pinder said.

Johnston put her in touch with Maske and she helped Pinder unlock her running ability.

Once she discovered she could run and, more importantly, that she liked running, Pinder made a choice her sophomore year in 1987 to be more committed to running.

The team would call their coach “Mama Maske,” Morrison said, because “she was really like our coach, our teacher, our mother.”

“She always had an open-door policy for anyone,” Pinder said.

Maske viewed the girls as her daughters, “and they still are,” she said.

She would always treat the girls to an outing at her house at the end of the season.

Many of the athletes, including Morrison, participated in indoor track to keep in shape during the offseason.

What made the team so special both years was twofold: good coaching and the team was like family, Morrison said.

“It didn’t matter who was the best,” Morrison said, “we all looked at each other the same.”

Pinder believed what made the team so great was its unity and the consistency of the coaches.

The girls were truly like sisters and they still communicate to this day and reach out to each other, Pinder said.

“During school Monday through Friday, we were each other’s keepers…we would keep each other focused,” Pinder said. “It was that kind of unity, looking after each other.”

When the team won the 1986 championship, the girls were all crying and their parents were around also to soak up the moment, Pinder said.

“It was just a beautiful thing,” she said.

“This little town Albemarle came all the way to Raleigh and won it,” Pinder said. “It was the best feeling in the world, it really was.”

But in 1987, the team had a reputation to keep up and it was much more businesslike, Pinder said.

“In ‘87, we were just there, we were trying to prove a point that we still got it,” Pinder said.

The team won individual medals both years as well.

Maske created a powerful team and it was not just regulated to the field, Pinder said.

Morrison lives in Union County. She is married and has three children. Morrison works at Carolinas Healthcare System Stanly.

Pinder had several running scholarships, but declined them because she wanted to go into the beauty industry. She opened up two salons and also taught at Stanly Community College. She lives in Charlotte, has two children and is recently retired. She was a hairstylist for 26 years.

Maske was the first black female head coach at Albemarle. She retired from the school in 1997 and served as principal of Stanly County Outreach Charter School for three years. In 2004, she and her husband moved to Wake Forest to be closer to family.

But the girls from the track team still keep in touch with their coach.

Around 2009, the girls from the state championship teams surprised Maske at her home for a reunion. When Maske came down the hill to her house, the girls were standing with a banner that read “We love you Mama Maske.”

“That was the first time they had seen me cry,” Maske said.

Maske described what the reunion meant to her.

“It meant that the love was true and that we still had a bond.”