Higginbotham speaks about her experience of flying to space 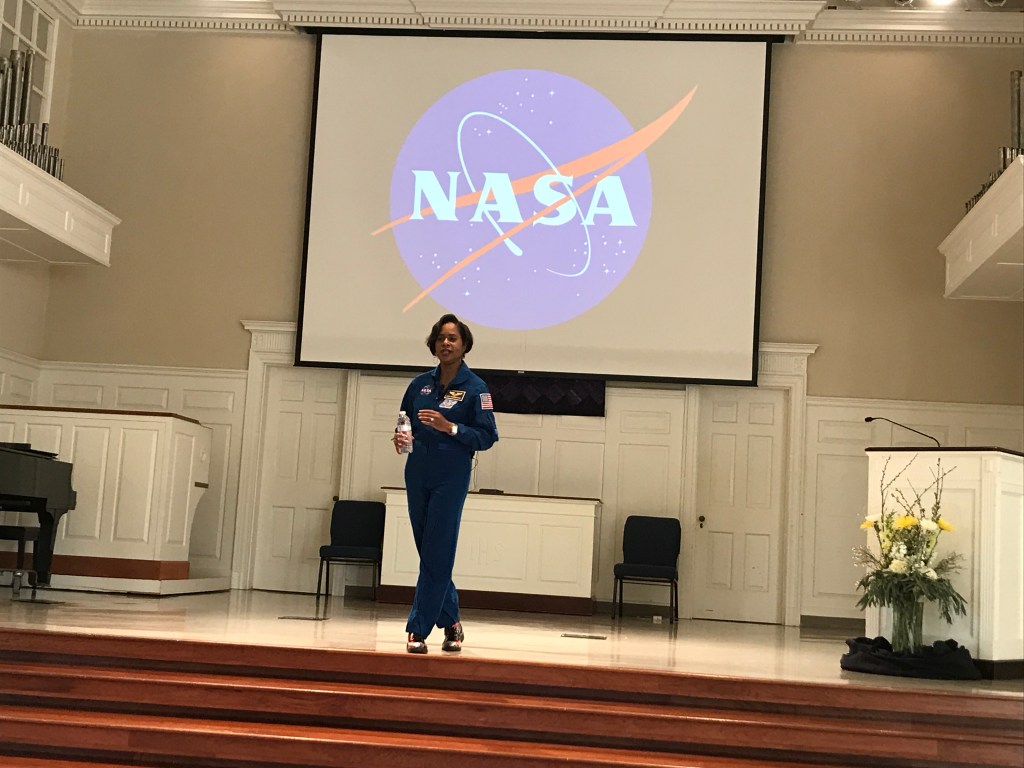 Though she is famous for flying aboard Space Shuttle Discovery mission STS-116 and was the third African-American woman in space, becoming an astronaut was never something Joan Higginbotham imagined growing up.

She spoke about “her journey to success” and ultimately finding what she calls her “it” before a crowd at Pfeiffer University Monday morning as part of the school’s Arts and Sciences Week.

Even as a young girl in Chicago, Higginbotham always wanted to be an engineer.

She knew she wanted to be an engineer when she tinkered with (and cut) different colored wires in her brother’s transistor radio in his car when she was 8.

“At that very moment, an engineer was born,” she said.

Her love for technology, along with math and science, eventually led her during college to become part of the INROADS program, which since 1970 has helped high-potential women and people of color gain access to high tech jobs. Through the program, Higginbotham earned an internship with IBM and worked as an engineer.

Higginbotham’s experience working at IBM eventually led her to NASA, where she became a rocket scientist and worked on the electrical systems of shuttles at the Kennedy Space Center. During her time as a rocket scientist, she participated in 53 space shuttle launches.

“OMG, it looked like something out of ‘Star Wars,’ ” Higginbotham said, when she first saw the Kennedy Space Center.

But after nine years, one of her bosses at NASA “uttered five little words that would change my life forever. He said, ‘You’d make a great astronaut.’ ”

She wasn’t sure because she liked being a rocket scientist, but she applied for the NASA astronaut program.

This taught her a valuable lesson.

“Always have a career plan, but don’t be afraid to change that career plan for the right opportunity,” she said.

Her “it,” she said, changed from working at IBM to working as a NASA rocket scientist to wanting to become an astronaut and fly on a shuttle.

Out of 6,000 people who applied to become NASA astronauts, Higginbotham was one of the 122 to be granted an interview. She also had to undergo thorough physical and psychological exams.

Though she was not one of the 15 to ultimately be chosen, Higginbotham was more determined than ever to become an astronaut. She went back to school and received another master’s degree and eventually applied again, was selected and became an astronaut.

She learned another valuable lesson.

“The ability to pick yourself up and dust yourself off will become handy in life,” she told the crowd. “It’s a skill to be mastered by everyone.”

From Dec. 9-22, 2006, Higginbotham achieved her dream when she, along with six other members, flew to space to help with the construction of the International Space Station. Her primary job while was to be the robotic arm operator on the ISS.

One of the few personal items she carried was a shirt that her late father had designed for a family reunion.

“It was probably one of the most prized possessions I took up,” she said.

Looking back, Higginbotham said “if I hadn’t been pushed out of my comfort zone, I would have missed out on so many things such as meeting people from all over the world, getting to travel all over the world…and to be able to tell people that whatever they want to do they can achieve without a doubt.”

In November 2007, Higginbotham retired from her 20-year career at NASA. She now lives in Charlotte and works as the director of corporate social responsibility for UTC Aerospace Systems.

Among her many awards and honors, she was inducted into the National Association of Negro Business and Professional Women’s History Hall of Fame in 2013 and was named one of Charlotte’s 50 Most Influential Women in 2014.

“All my life I was told that the sky is the limit and I used to actually believe that,” she said. “I now respectfully disagree with that. I say that the sky is no longer the limit because I’ve literally been above and beyond the sky.”