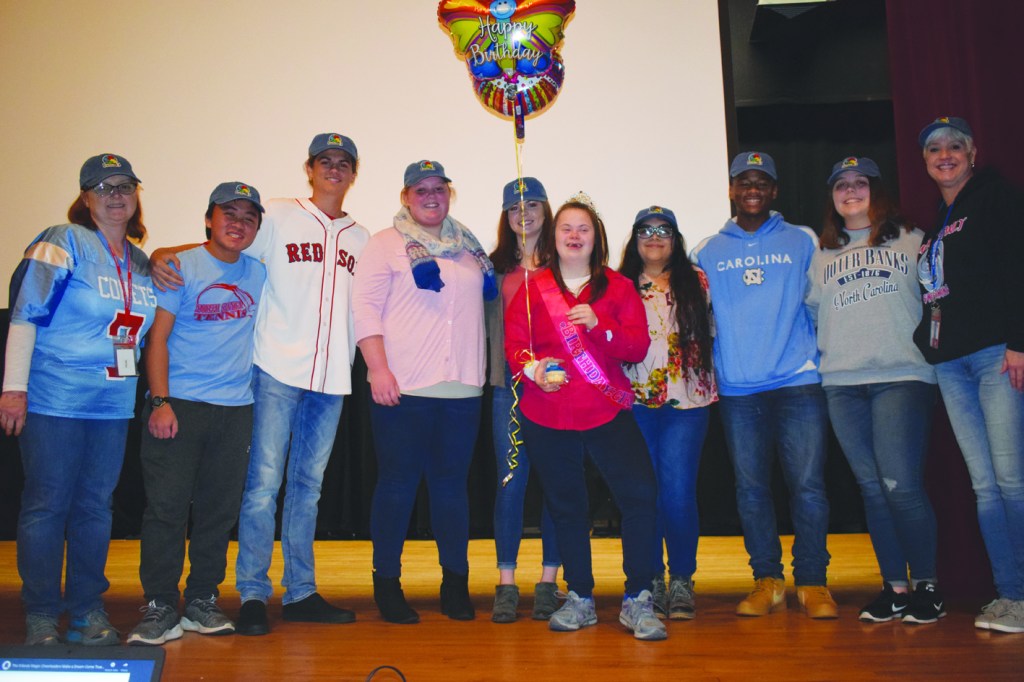 At the beginning of the school year, eight North Stanly High School students received emails with instructions to meet in the school’s conference room. Most of the students didn’t know each other and didn’t know why they were meeting.

“We didn’t know what was going on,” said student Rhett Lowder, “we just showed up.”

The email and initial meeting led to the formation of the Jr. Dream Team. Their mission was to decide which student should be chosen to have his or her dream come true on behalf of the Dream On 3 program.

The program is a nonprofit, dream granting organization that serves Georgia and the Carolinas. It provides children who are living with a disability or life-altering conditions an opportunity to live out their sports dreams, according to the group’s website.

Why the name Dream On 3?

“Dream On 3 is named such because we want kids to dream big and we are all one family — the dream kid, family and DO3,” wrote Sue Ramsey Jr., Dream Team program director, in an email.

After debating several potential candidates, the team chose senior Anita Stirewalt, who has Down syndrome. Students describe her always happy and eager to hug students and brighten their day. She earned four medals at the Special Olympics and is a dedicated Comets sports fan who attends many school sporting events. She also made a memorable impression on many students (including some on the team) when she danced all night at last year’s prom.

“She was dancing, having fun and she got everyone involved,” Helms said about Stirewalt at the prom.

“She is one of the most outgoing, sweetest, funniest girls I know,” Busch said. “She acts shy at first, but once you get to know her she is very outgoing.”

Busch added Stirewalt would often sit with her during football games.

Stirewalt is a huge racing fan and her favorite racers are Jimmie Johnson and Kyle Busch.

The dream team along with Ingrid Wyrick, the guidance secretary, and Charlotte Helms, the school counselor, submitted their Dream On 3 application.

Principal Dr. Randy Mann first informed Wyrick and Helms about the program and they reached out to teachers to help select eight students to be part of the dream team.

“Dr. Mann brought this to our attention to apply for this because he was eager for our school to get involved,” Wyrick said. “It was his idea in the beginning.”

Though the program is highly competitive, with around 40 to 50 schools in the region applying, North Stanly was chosen. It is the first Stanly County school to be in the program.

During the first month and a half, the Jr. Dream Team, which meets every Friday, spent time getting to know each other through various team-building exercises and planning how best to learn about Stirewalt. They were also working with Dream On 3 officials.

They created a questionnaire that was given to Julie and J.P. Furr, a couple who teach special needs students, including Stirewalt.

The Furrs passed the questionnaire to each of their students so Stirewalt would not catch on.

“Anita has been part of our lives over the past four years as we have been fortunate enough to serve as her classroom teachers,” the Furrs said. “Since day one, Anita has displayed a pure joy for life, always carrying a radiant smile that brightens the days of those around her. Her laughter is infectious.” 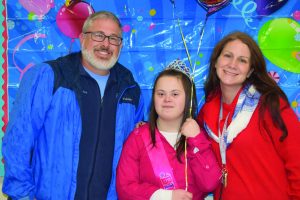 Once Stirewalt completed the questionnaire, the Jr. Dream Team knew their mission: Help make her dream of meeting one of her favorite racers (most likely Johnson) and watching a race a reality.

The team continued to meet and plan on how to make her dream a reality. No one else in the school knew about the team or its goal.

“We were brainstorming what we wanted” in terms of making Stirewalt’s dream come true, Hunt said.

In December, the team threw a luncheon for Stirewalt in a classroom and, with posters of Johnson, Kyle Busch and her favorite singer Luke Bryan adorning the room, revealed that she was selected by the Dream On 3 program to have her sports wish granted. Rather fittingly, Stirewalt was wearing a Johnson jacket during the big reveal.

Stirewalt said it made her feel happy that the team wanted to help her achieve her sports dream, but she was also surprised when they first told her. Suzanne Holshouser, a teacher assistant with the Furrs, secretly arranged for Stirewalt’s mother to be there and had her waiting with the team when Stirewalt arrived.

On Jan. 4, after months of preparation, the dream team revealed the Dream On 3 program to the whole school in the auditorium.

“We explained what we were doing to the student body and who the special person was that was chosen,” Maggie Busch said.

The team showed a Dream On 3 video to the school and discussed Stirewalt. The school knew a dream team had been selected, but did not know what for until they came to the assembly in the auditorium. All the dream team members participated in explaining the plan.

Stirewalt was so happy once the school was informed that she cried, Busch said.

That day was also special to Stirewalt for another reason: it was her birthday, so the dream team brought balloons and cupcakes and with Stirewalt wearing a tiara and a birthday sash, the whole school sang “Happy Birthday,” Barber said.

After the school knew about her dream, the team went to work fundraising. Their goal is to raise $5,000.

The team started selling $10 T-shirts, with the front reading “Dream On 3” and the back “Finishing with Anita,” with three race flags, Moua said.

So far, the school has sold about 150 T-shirts.

The dream team is also asking local businesses for donations to try and meet the $5,000 goal. Dogwood Farms has already donated $200, Lowder said.

Gonzalez-Ponce works at Handi-Mart and brought a donation jar for patrons and employees to help donate.

The school also has a talent show at 7 p.m. April 4 in the auditorium. Tickets will be $3 at the door and all proceeds will go towards helping the dream team meet their $5,000 goal.

The school is still collecting donations and they would like all the donations in by around the beginning of May.

If any business or organization would like a donation jar or if any individuals want to donate money, they can contact North Stanly High School.

The dream team is busy preparing for the sendoff in mid-May, where the school will again gather and students will finally be informed of Stirewalt’s sports dream.

“Since our fundraising has taken off a little bit, we’re more focused on the sendoff,” Lowder said. “The sendoff is our big thing.”

The dream team has morphed from a bunch of students who didn’t know each other into a cohesive group that enjoys hanging out together.

“We work together as a team, but to be honest we act as a family,” Selke said.

The dream team has learned a lot about not only Stirewalt and each other, but themselves as well.

Being a part of the dream team “helped better me in organizing things and taking up a leadership role,” Moua said. “The thing that interests me is that out of all the applications, they choose us.”

Throughout the process of being with the dream team, “I think it’s made me a stronger person, and made me more grateful,” Hunt said.

“I could probably speak for everybody and say it’s (the dream team) pushed us out of our comfort zone,” Lowder said, citing the fact that the team had to speak in front of the whole school during the kickoff.

What Barber has enjoyed most about the Dream On 3 program was the kickoff and “seeing Anita smile.”

“What I have learned during the wonderful time I have spent with my team and leaders is to cherish the people we have in our lives,” Selke said. “Throughout school you notice that people are excluded and that should not be okay, we need to include everyone no matter what they look like or if they are rich or poor.”

Though Helms didn’t know the other students during the first meeting, the more they’ve worked together, the closer they became.

“What I like about the program is that you get to make new friends,” she said.

Ultimately, Stirewalt is grateful for the experience.

“Getting picked for the Dream On 3 made me so happy that I almost cried,” she said. “It makes me feel so special that everybody loves me so much. I am so excited about getting to meet everybody that is part of it.”