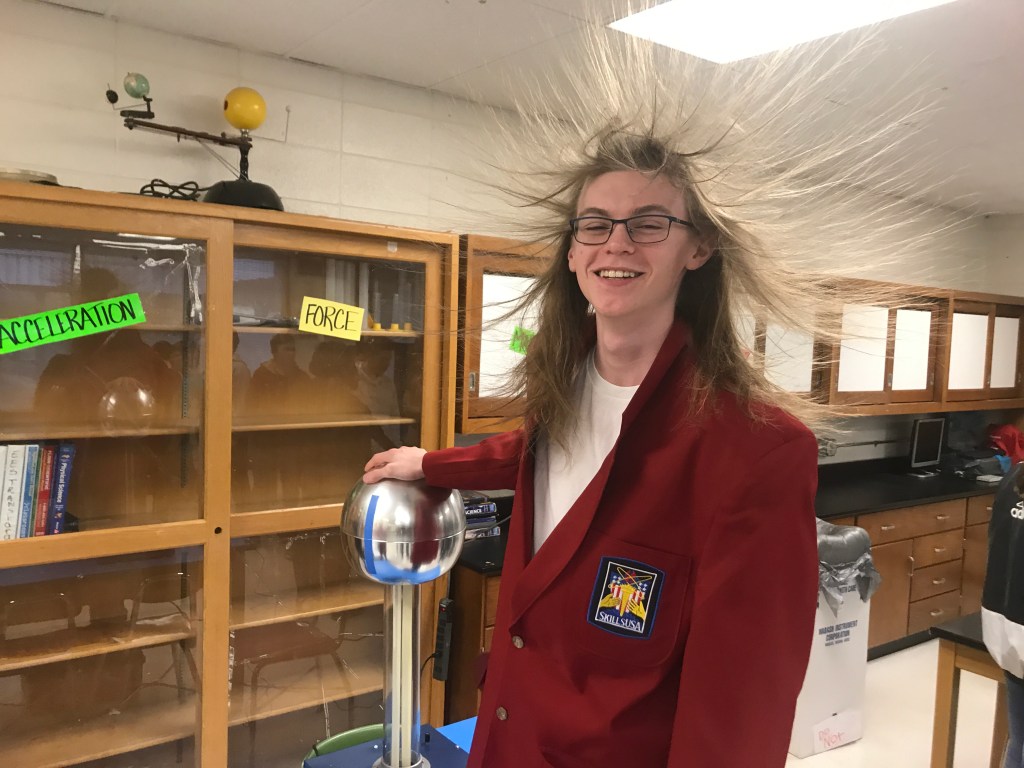 The clubs recently applied for the Bright Ideas Education Grant through Pee Dee Electric and received a $1,600 grant they used to buy a Van De Graaff generator and build a hovercraft.

Students in SkillsUSA and the Physics Club presented the different science demonstrations to the middle school students.

Some of the demonstrations included the Van De Graaff generator, which uses a moving belt to accumulate electrical charge onto a metal globe creating electric currents; a hand-cranked generator, which converts mechanical energy into electrical energy; a leaf blower-powered hovercraft; and several small dancing robots.

Another demonstration showed the power of vibration when a vibrating metal rod was dipped into a cup of water. The water instantly shot out of the cup when the rod made contact. 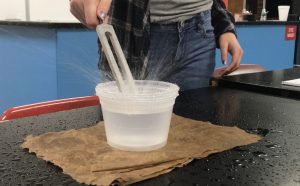 As a vibrating metal rod makes contact with a water cup, the water shoots out of the cup.

SkillsUSA is a career and technical student organization that helps students get ready for careers through the development of personal, workplace and technical skills grounded in academics.

The program serves more than 395,000 high school, college and middle school students, according to its website.

The students learn different skills based on what they are interested in, said Bill Sorenson, electronics and robotics teacher at South and the school’s SkillsUSA advisor.

Some of the current students in the club are learning more about robotics, engineering, baking and clothing design.

Sorenson’s main roles are advising the students and letting them decide what they want to focus on. 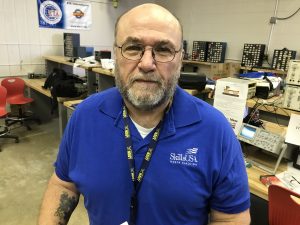 Bill Sorenson is the school’s electronics and robotics teacher and head of the SkillsUSA club.

Sorensen wanted to partner with the Physics Club because “we’re pushing STEM (science, technology, engineering and math) in this country and real STEM is when they merge.”

The partnership was a “cross-curricular concept,” said science teacher Debra Page, who is also the head of the Physics Club.

Tyler Ostrander, a senior and a member of the club, enjoys electronics technology skills and the club has helped him to better develops his skills. He wants to be an electronics technician in the Navy.

“Skills is a gateway for many opportunities,” said senior Triston Goodson, who plans to pursue a career in electrical engineering.

It’s important because, according to the Los Angeles Times and the U.S. Department of Labor, there are 6.3 million unfilled skilled labor jobs in the United States, Sorenson said.

Though there are several regional, state and national competitions, Goodson said the club is really about “honing your skills for the future.”

“We’re all in skills for a different reason, but we all come together to form one big family,” Goodson said.

The club has earned the bronze recognition for being a Chapter of Distinction for the last two school years, Sorenson said, and this year the club wants to try and earn the silver recognition.

The most important aspect about SkillsUSA is it keeps kids in school, Sorenson said. Even if students do not enjoy traditional aspects of classroom learning, the club is a way to develop and harness their skills so students can become better equipped to find a career once they leave South Stanly.