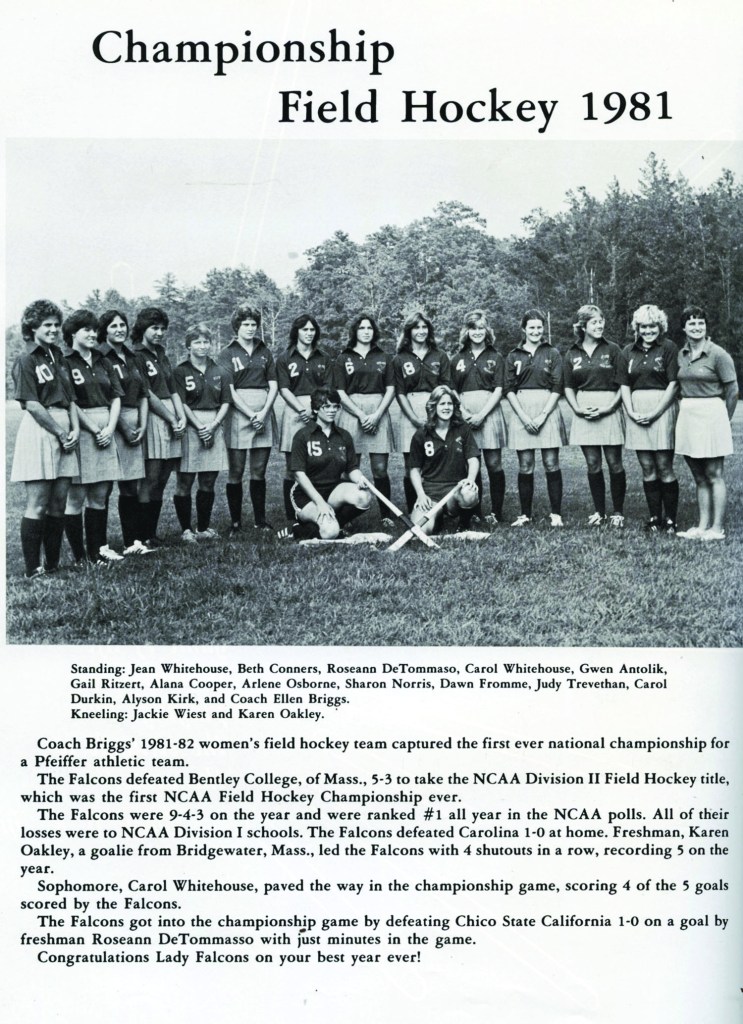 A page from a Pfeiffer College yearbook recaps some of the highlights from the field hockey team’s season. (Contributed)

Field hockey is not a high visibility sport on most college campuses in the South. Few public high schools offer the sport and, compared to basketball, volleyball, and softball, it has no significant presence in youth sports circles.

But field hockey’s small following and lack of regional charisma did not prevent Pfeiffer’s 1981 squad from capturing the school’s first national collegiate championship.

Prior to 1981, NCAA-sponsored championships existed for men’s sports only, with women’s athletics governed by the Association of Intercollegiate Athletics for Women (AIAW).

But with the advent of Title IX, which mandated schools and colleges offer equal athletic opportunities for male and female students, the NCAA voted to increase its scope, implementing women’s athletics and championships.

With a steady influx of student-athletes who had grown up playing the sport in northern states, along with others who learned the game upon coming to Pfeiffer, the school had offered field hockey for a number of years with mixed success.

Schedule-wise, a lack of schools field ing teams in the area required Pfeiffer to take on larger institutions with greater resources. As such, during the 12-game regular season, the Falcons’ schedule included ACC opponents Clemson, Duke, North Carolina and Wake Forest.
Entering the 1981 season, Pfeiffer’s squad hoped to build on its 11-5 record from 1980, the team’s final season of AIAW competition. Led in scoring by sophomore forward Carol Whitehouse and junior wing Carol Durkin, the group transitioned to NCAA competition under the direction of fourth-year head coach Ellen Briggs.

After dropping its opening match 3-1 to Appalachian State, an intimidating stretch of games followed for the Falcons squad, with Wake Forest, Duke, UNC and Clemson awaiting in order. But a 7-1 rout of Wake, followed by an overtime win at Duke and a nail-biting 1-0 conquest of North Carolina served notice that this small-school team could compete with anyone.

A 1-0 overtime loss to Clemson followed, but the team rebounded with wins over High Point (4-1) and Davidson (6-0) before dropping consecutive matches to Virginia Tech (1-0) and Clemson (2-0). Regular season play concluded on a high note, however, with victories over Hollins (5-0) and Catawba (3-0).

Although having compiled a winning, yet modest 7-4 record, Pfeiffer garnered the top seed in the four-team national playoff field as members of the NCAA Field Hockey Committee considered the team’s grueling schedule.

Upon release of pairings, Pfeiffer received notification it would host fourth-seeded Chico State in a semifinal match.

Nov. 14, 1981 marked the first NCAA playoff in any sport hosted in Misenheimer, and the match proved worthy of a national semifinal, as the two teams battled to a scoreless tie in regulation play.

Four minutes into the extra period, freshman Roseann DeTommaso fired a deflected shot into the net to send the home squad to the NCAA championship contest the following weekend.

By virtue of holding the higher seed, Pfeiffer soon was informed it would host Bentley, a 2-1 winner over Adelphi, in the finals on Nov. 21.

The championship match, played on a cold and windy afternoon at Pfeiffer, drew fresh local attention to the little-known sport, in addition to visiting fans from Bentley and administrators from NCAA headquarters.

The Stanly News & Press accounts of the match reported around 500 spectators in attendance in addition to being broadcast over Albemarle radio station WZKY and Pfeiffer campus station WSPC.

But soon after faceoff, the high-pressure atmosphere of the semifinal match one week earlier was quickly eliminated as Pfeiffer jumped to a quick 3-0 lead on consecutive goals by Whitehouse.
Whitehouse scored again in the second half, and Durkin added another goal as Pfeiffer cruised to a 5-3 win, becoming the NCAA’s first Division II field hockey champions as well as the school’s first national championship team.

In the ensuing years, the Falcons were never able to duplicate the success of that 1981 season. In 1983, Briggs left Pfeiffer, and by 1984, those team members who experienced the championship run had graduated.

In 1993, the championship squad was inducted into the Pfeiffer Sports Hall of Fame.

But only a few years later, Pfeiffer became one of a growing number of southern schools to discontinue field hockey as a varsity sport. Most cited the expense of scheduling and travel, others found recruiting a difficult task.

And while field hockey, at least in the South, has since slipped back into relative obscurity, Pfeiffer will forever be able to cite the sport and its 1981 team as being the first to put the Misenheimer campus on the NCAA map.