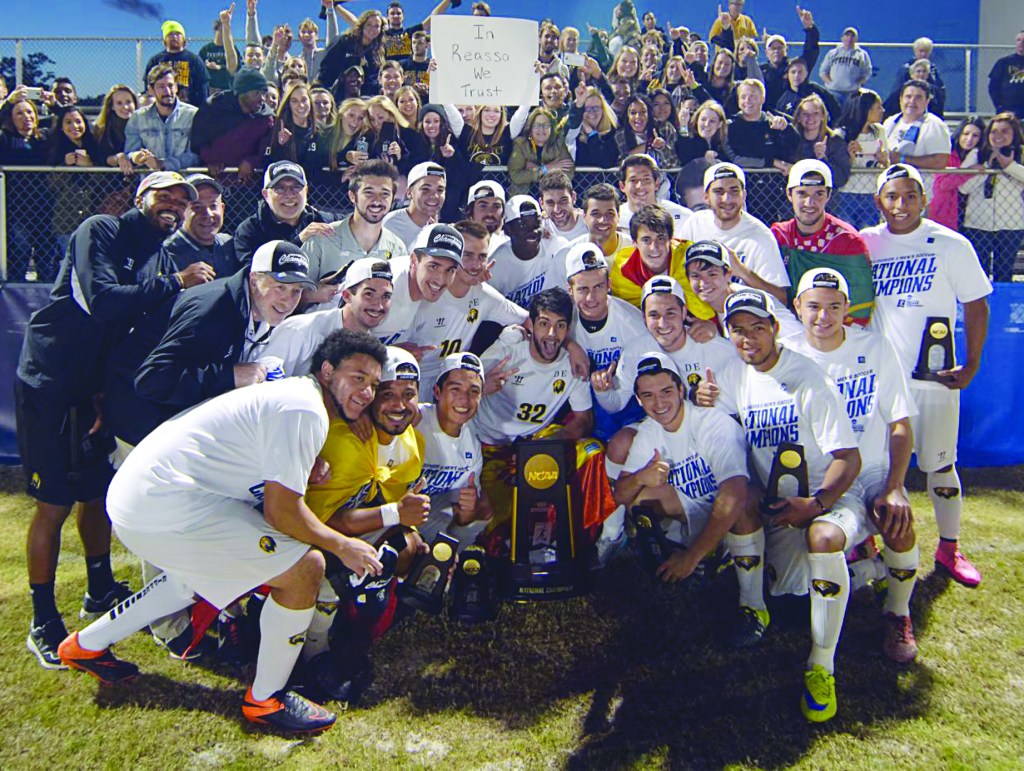 The 2015 Pfeiffer University men’s soccer team provided the school with its only men’s championship title. In doing so, the team had an undefeated 17-0 regular season. (Contributed)

In 1990, Pfeiffer alumnus Bob Reasso and the Rutgers team for which he served as head coach reached the NCAA Division I Soccer Championship game, but lost after two overtime periods on penalty kicks.

For Reasso, the road to soccer championships began in 1969 in Misenheimer, where by his senior season (1972) he had established himself as a talented player, leader and competitor, having been named All-Conference, All-District and team MVP. The road continued as he served as a graduate assistant at Springfield College in Massachusetts before taking the head soccer coaching position in 1975 at Nasson College in Maine.

In 1980, Reasso was named head soccer coach at Rutgers, where he remained for the next 29 years, taking the Scarlet Knights to 13 NCAA Tournament appearances, three Final Fours and one championship appearance before resigning in 2009 to accept the athletic director position at Husson University in Maine.

After three years at Husson, Reasso returned to his roots in 2013, taking the soccer coaching reins at Pfeiffer in addition to the school’s athletic director position.

The Falcon soccer program, which had won only one match the previous season, immediately saw improvement under Reasso’s guidance, finishing with a 10-8-2 record in 2013 before setting a program record for wins (17) the following season on the way to a Carolinas Conference title and the school’s first NCAA Tournament berth.

With the marked improvement over the previous two seasons, the outlook on campus was optimistic entering the fall of 2015, as the team returned scoring machine Nathan Regis, along with playmakers Martim Galvao and Cristobal Allendes, plus goalie Tomas Correa. Home wins over Newberry (6-0) and Flagler (4-3) to start the season proved the optimism well-founded.

Over the next nine weeks, the Falcons continued to collect W’s, rolling to a 17-0 overall record to cap a perfect regular season.

For the Pfeiffer team, the national finals at Pensacola, Fla. followed a pattern very similar to that experienced by the school’s 1981 field hockey squad, as a nail-biting semifinal match determined in overtime before a somewhat anticlimactic championship contest.

The semifinal matchup pitted the undefeated and untied Falcons against Charleston (W.Va.) on Dec. 3, and matched two skilled and equally-talented teams.

In the match, Pfeiffer jumped to a 1-0 lead at the 30-minute mark on a Regis goal, his 30th of the season. Charleston evened the score at the 88-minute mark on a goal by Will Roberts, which forced extra time. A scoreless first overtime period saw Pfeiffer’s Santi Moar fire a cross in the 104th-minute, which Jamie Siaj drilled into the net for the game winner.

The win by Pfeiffer seemed improbable to those who saw the match, as Charleston controlled possession for most of the game, outshooting Pfeiffer 20-10 with Correa’s flawless performance in goal the key to victory. 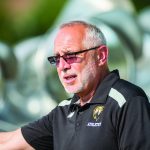 Bob Reasso, a Pfeiffer graduate, coached the men’s soccer to prominence by winning a national championship.

“I thought that on the whole they were the better team today,” Reasso said of Charleston. “The one thing that we have in our program is we have goal scorers and we have heart. We found a way to win tonight.”

Two days later, Pfeiffer would face Cal-Poly Pomona, a 2-1 semifinal winner over Rockford, in an effort to capture the school’s second national team championship, and first for a men’s team.

And not only was a national title on the line, but the Falcons were seeking to become only the second undefeated and untied national champion in Division II soccer history.

Pfeiffer ended any suspense as to the outcome early in the match.
Regis netted his 31st goal of the season only three minutes in, and Jamie Siaj upped the score to 2-0 only 90 seconds later.

Regis drilled a penalty kick at the 61st minute, and Siaj scored his second goal of the contest in the 63rd. The Falcons kept constant pressure on the Cal-Poly defense, outshooting the Broncos 21-12

Correa continued his outstanding play at keeper, recording his seventh shutout of the season, having to make only two saves the entire match.

Defender Dani Siaj was named the Most Valuable Defender in the tournament as well.

In the process of the 4-0 win, Pfeiffer recorded the first title game shutout in six years.

Able to make good on his second chance at a national championship, Reasso gave credit to his team during his post-game comments, while also expressing his loyalty to Pfeiffer.

“It means a little bit more to me because this is my alma mater, and mostly because of the guys,” he said.

The following season, Pfeiffer was unable to match its perfect 2015 campaign, but did advance to the final 16 in Division II soccer before being ousted by neighboring rival Wingate in the Southeast Region tournament.

Reasso resigned as soccer coach following the 2016 campaign, and left in 2018 to become the athletic director at The American University in Cairo, Egypt.

Reasso had been named to the Pfeiffer Sports Hall of Fame in 1995.