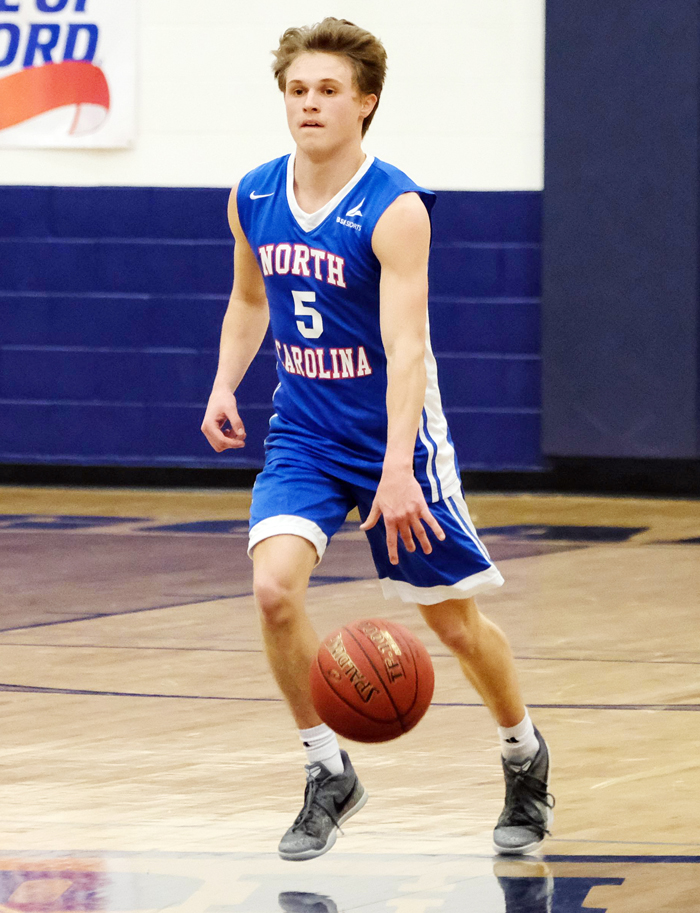 North Stanly's Bryson Childress scored 21 points in Saturday's Carolinas Classic All-Star Game in Wilmington. Childress and two other players broke the previous record for most three-pointers made in a Classic. (Photo by Ken Oots/Wilmington StarNews).

Having finished his high school career as the all-time leading scorer in Stanly County history, Bryson Childress still had one more game to play before suiting up in college.

The senior played in the 22nd annual Carolina Classic All-Star Basketball Game at Hoggard High School in Wilmington on Saturday and scored 21 points for the North Carolina team in a 129-117 loss to South Carolina.

Childress knocked down seven three-pointers, which along with South Carolina’s Tre Jackson III, who made eight, and North Carolina’s Justin McKoy, who hit six and led the team with 31 points, all broke the previous mark for a Classic. Jackson III set the record for most points by one player in the Classic scoring 36 points.

Along with playing in Saturday’s game, Childress and other spent time working with kids in the Miracle Field program which he said “was such a humbling and eye-opening experience. It was really amazing to be a part of the whole event, not just the game.”

He added playing with players, many of whom are being recruited by high-level NCAA Div. I programs, was “so much fun to play against big-name high major players like that, where you get to go out and prove you belong with them. It was great meeting some of the guys and making some long-lasting friends during the event.”

Childress, who said he hopes to make a decision about playing at the next level in the next two weeks, said he hoped his efforts in the game “will help some schools realize I can play at their level.”

The senior, who scored 2,197 career points for the Comets which ranks 22nd all-time in the NCHSAA record book, also received a recent honor being named to the North Carolina Basketball Coaches Association’s All-District squad. He was named First-Team All-District 8.