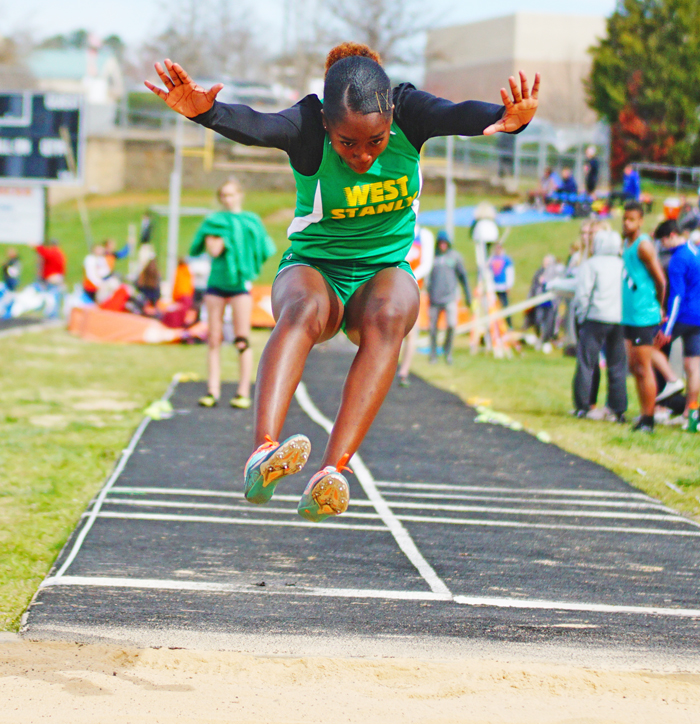 Onii Bivens flies through the air towards the sand pit at the Marvin Ridge Invitational. (Photo by Johnny McManus)

The West Stanly track teams opened the 2019 season with a trio of meets.

The Colts started with a scrimmage type meet March 4 at East Rowan. The dual meet gave both schools a chance to enter all their athletes in multiple events.

The Colts headed to Albemarle March 12 for the Albemarle Invitational. Other schools competing were West Montgomery, Gray Stone and North Stanly. Results were not available.

The Colts finished the series of meets at the Marvin Ridge Invitational March 16. This annual meet is a test against some of the top 3A and 4A schools in the region. The Colts came away with one school record and a medalist, as well as numerous personal records.

West’s distance runners opened the meet with the 3,200-meter relay. The foursome of Pierson McManus, Rachel Efird, Maddie Miller and Natalie Almond fresh off their fourth-place medal finish in the indoor state meet kept the success going. The Colt group each ran season-best splits, leading to a fifth-place finish and a regional qualifying time of 10:47.

Bivens then moved to the jumping pits with a 15-10 long jump personal record, which was good enough for a third-place medal. Her jump also met regional qualifying standards.

Senior Pierson McManus 12:17 and freshman Natalie Almond 12:45 both met the 13-minute qualifying standard while setting new personal records. McManus ran splits of 6:08, 6:09 to get within 10 seconds of her sister Lefler’s school record. McManus ran a personal record 5:46 earlier in the week in the 1,600 meters to qualify the Colt senior in three events.

Jordan Poole was a finals qualifier in the 100-meter dash for the Colt men. The Colt sophomore ran a 11.29 in the preliminaries, then ran 11.30 for seventh place in the finals.