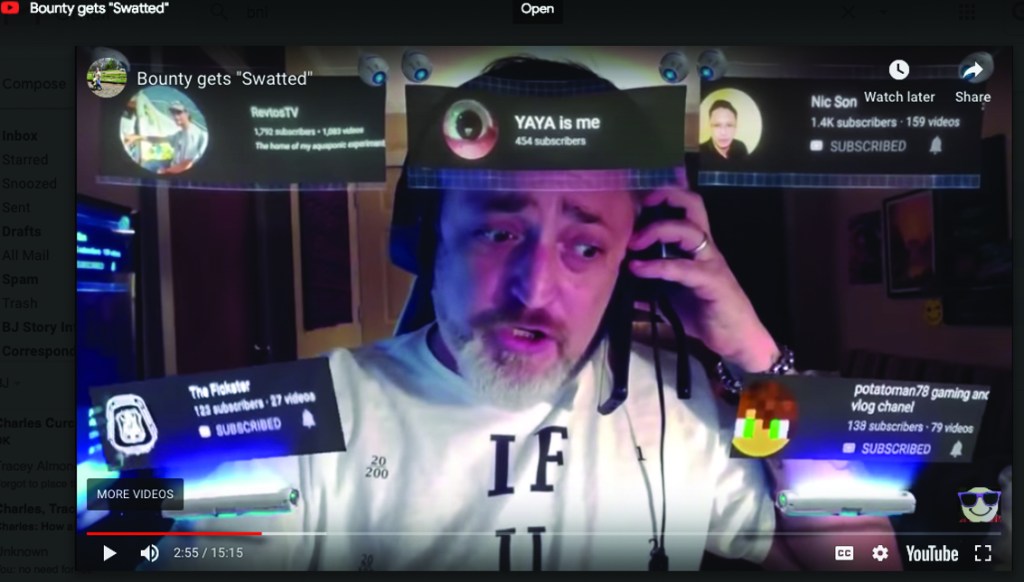 This image shows when Ernest Morton received a call from emergency services Monday night. He then realizes he has been “swatted.”

A Locust man says he was “swatted” Monday night.

Swatting is a term used to describe criminal harassment by having an emergency service dispatcher send police or an emergency response team to another person’s address.

Ernest Morton says police showed up at his home shortly after 6 p.m.

“They blocked off both lanes, they had people everywhere. One with a pistol drawn, one with tactical gear,” Morton said Tuesday afternoon.

Morton operates a Youtube channel where he promotes other channels, tries various hot foods and does other things to entertain people. He said he has operated a channel since 2012, but viewership has picked up in the last month.

Morton was live streaming from his home when he received a call to walk outside. He told police he had his phone in his hand.

He re-entered the home with police officers, who checked on the status of Morton’s wife and children.

Morton told police, including Chief Frank Hartsell, how much he appreciates what they do as the computer’s camera continued to stream.

“Everybody got to see my emotions and see how I was dealing with it,” he said.

But on Tuesday, Morton had a change of attitude.

“I lost so much respect for what they’re doing here,” he said. “I had to fear for my life before I could say, ‘Hey, you (police) are being used as a weapon.’

“I don’t know how they are going to go about catching the person who was trying to terrorize my family by using the police,” he added.

Morton said he wanted his Youtube channel to be successful, but he did not want to gain fame this way.

“I would never have wanted it for what my family has (gone) through,” he said. “It really damaged us. It’s made me bigger online, but it’s damaged us as a family. Is it going to happen again? Do I need to stop what I’m doing?”

Hartsell spoke of the initial call.

“Apparently one of his watchers called the 911 center and said he had killed his wife and was going to shoot the police,” Hartsell said, referring to Morton.

Hartsell said police are working to solve the hoax, which is a crime. He said he also worries about copycats and a “waste of resources” on hoaxes.