Gray Stone STEM students are off to the races 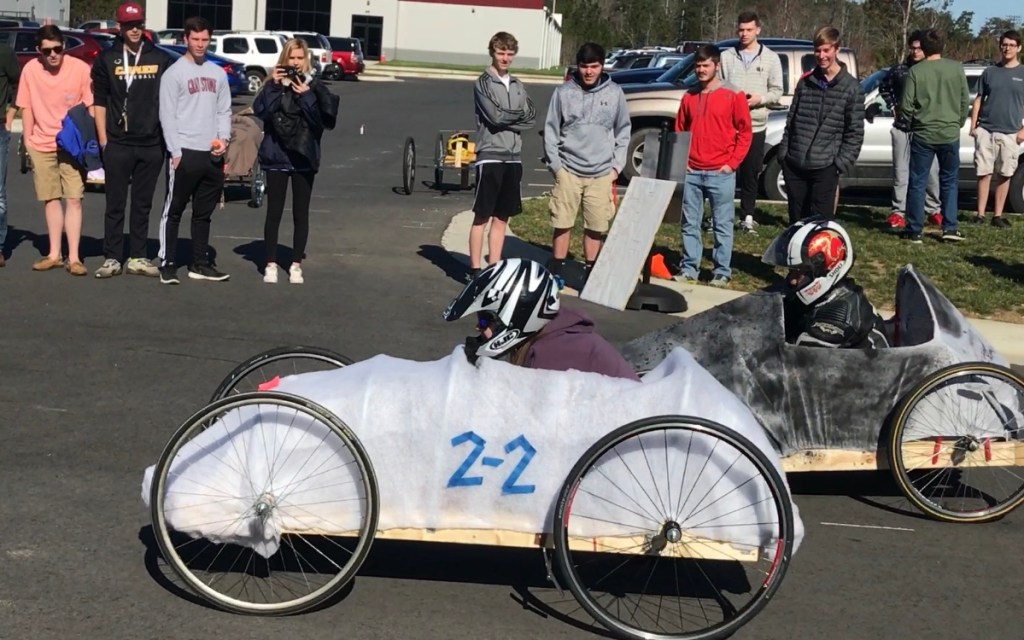 As the air horn blared, two “Little Rascals”-type soap box derby cars rode down wooden ramps and, buoyed by the cheers of the crowd, raced a few hundred feet to try and cross the parking lot finish line first. 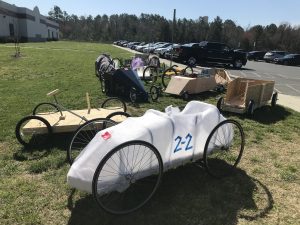 There were a total of 16 derby-like gravity cars that competed in the tournament.

Brown’s STEM classes have spent the year designing and engineering different hands-on projects. They built towers out of strands of spaghetti and marshmallows, built cardboard canoes and tested them in the Pfeiffer University pool and built a Da Vinci catapult.

“The whole goal is to really give the students the STEM experience,” said Brown, who was a chemical engineer before becoming a teacher. “They learn the science and technology behind what they’re doing, but they do it through real-life, hands-on projects.”

Each project is designed to teach the students important STEM skills.

For the gravity cars challenge, the students learned about potential energy, kinetic energy, physics and gravity, Brown said. The students had to build and test cardboard prototypes before they began building their cars.

And the rules were simple.

The cars had to be no more than seven feet in length, five feet in height, six feet in width and weigh no more than 300 pounds. The cars also had to be able to steer and brake.

The students could build the cars out of any material, but Brown pushed them to find unique ways to get the car parts. He encouraged them to dumpster dive, go to local businesses and search local salvage yards.

“We just had to create everything from scratch,” said junior Cody Davis.

He said building the cars taught the students more about aerodynamics, friction and “getting more apt with tools.”

“I believe that the hands-on makes all the difference in the world,” said Helen Nance, chief administrative officer at Gray Stone, “because you can take what you’ve learned in the classroom on paper and build something and see if it really works.”

Though Brown was their adviser, the students were responsible for building the cars and overcoming any problems that might arise.

“It was kind of interesting creating the vehicles,” said junior Kate Mitchell, “because you never know if it’s going to work and you just make things up as you go along and hope they work out.”

The cars in each individual STEM 1 class raced against each other and then the four winning cars competed until one car was victorious.

The winning car came from Brown’s fourth period class. Senior Ashley Burris was the driver and the other members were Mitchell, junior Cameron Pierson and sophomore Ethan Lowder. The car is two feet by four feet and made of plywood chassis, metal hoops and fabric cover with bicycle wheels.

“It seemed like a really hard project at the beginning, but then it worked out,” Pierson said.

“Teamwork was a big deal” and was an important reason why they won,” Lowder said. 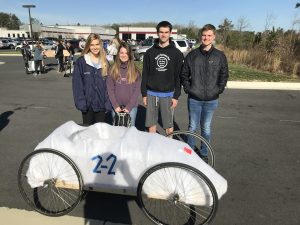 The winning team will go with Brown to the N.C. Gravity Games in Lenoir on April 13 to compete against other student-created derby cars from around the state. The games are sponsored by Google and Appalachian State University.

“I’m excited to go, but I also know there are also a bunch of legit people there…it will be a good opportunity to go and see how we do,” Mitchell said.

“My main goal is for them to grow as students,” Brown said, “so I want them to gain the life skills: team work, communications, planning, time management, as well as the science and engineering components and the hands-on skills of being able to build things themselves.”