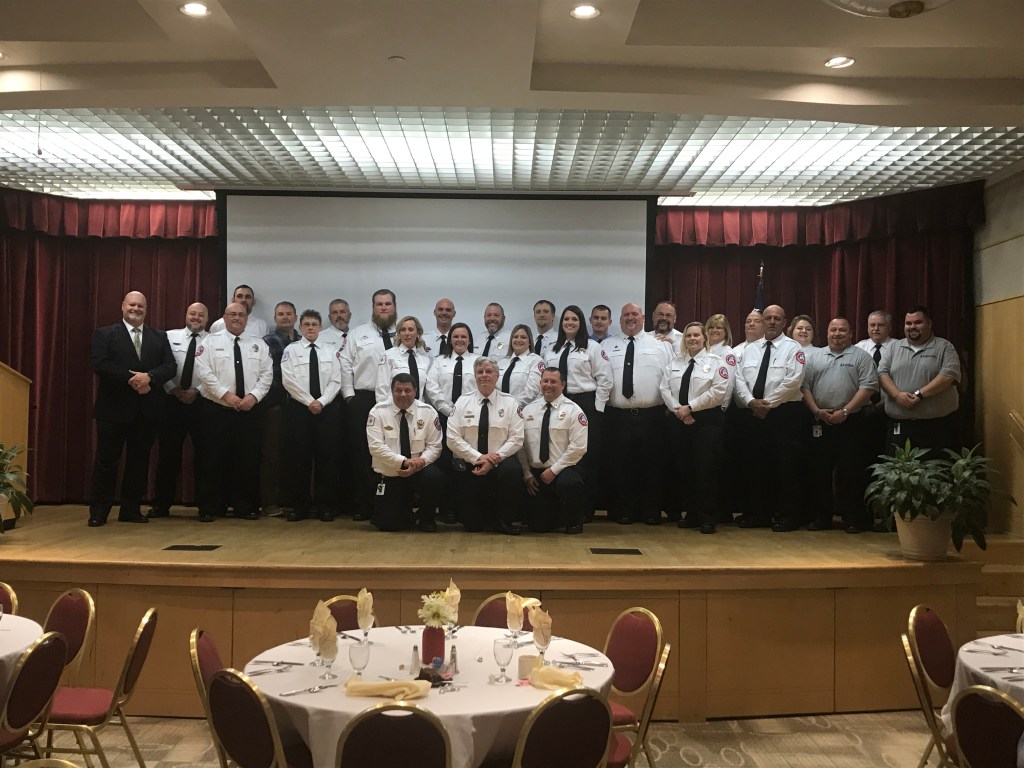 All of the Stanly County EMS workers gather at the HeartBEAT ceremony.

Tyler Medlin was a firefighter going to respond to a call about six years ago when he went into cardiac arrest.

Jessica, his wife, was a home health nurse and she always kept her radio on when Tyler was working.

It was late in the morning when Jessica heard one of his partners on the radio say a fireman was down and CPR was in progress.

She found Tyler at the hospital. He eventually came around and was given an implantable cardioverter-defibrillator.

He had several small episodes where he felt like he was passing out and eventually was diagnosed with type 2 brugada syndrome, which is sudden cardiac arrest, Jessica said.

“If it wasn’t for CPR being administered effectively by incredible paramedics and first responders than we would not be where we are today,” Jessica said.

Tyler was one of six survivors at the HeartBEAT Celebration at Atrium Stanly Thursday night. The Stanly County Emergency Medical Services honored 2018 cardiac arrest survivors during the inaugural event.

Survivors and their families got a chance to meet the first responders, medics, nurses, firefighters, doctors and law enforcement that helped save their lives.

The keynote speaker was Lee Allen, broker and owner of Re/Max Town and Country.

Allen loves to run and has participated in many races, including the Boston Marathon, and Ironman competitions.

But in 2017, he wasn’t feeling normal. He took a stress test, which involved running on a tread mill. His heart rate gradually decreased to the point where he collapsed. The last thing he remembers was his doctor yelling, “Stay with me! Don’t you leave me!”

Once he woke up, Allen said it “felt like someone took a Louisville Slugger to your chest.”

After several tests, Allen had 98 percentage blockage of his left interior artery and a stint was placed. Though he had some initial setbacks, he was able to resume his running regimen.

Allen said for much of his life he took care of himself and didn’t want assistance, but his cardiac arrest showed him everyone needs help at some point in their lives.

“I grew up with the mentality that we lifted ourselves up by our bootstraps,” he said, “but what happens when you don’t have boots?

“The only weak person is the one not asking for help,” he said.

Siesta Rushing, Crystal Poteat, David Crisco and Jackie Kimrey were 2018 cardiac arrest survivors and they were honored and got to meet the people who helped save them. 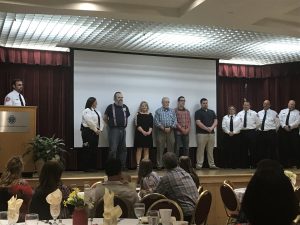 Cardiac arrest survivor David Crisco (in the suspenders) was honored and got to meet the many people who helped save him.

Stanly EMS presented the 2018 Life Saver of the Year Award to Terry Eudy, who was an active participant in three of the six 2018 cardiac arrest saves. 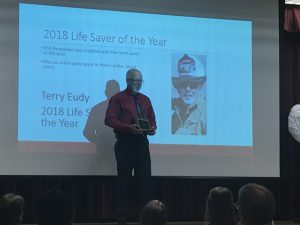 Terry Eudy honored as the 2018 Life Saver of the Year.

“Next to creating a life, the finest thing a man can do is save one.”