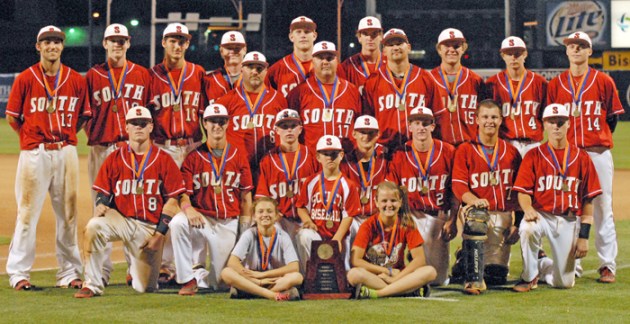 The 2013 South Stanly baseball team won the school's third state title in five seasons with the wins in the series. (File Photo) 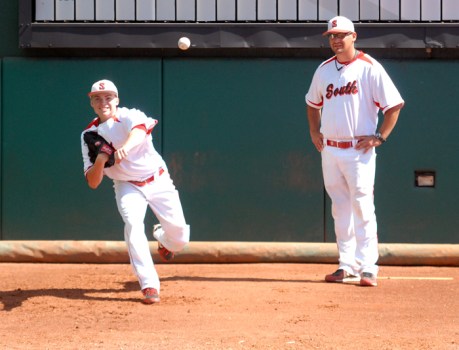 Easton Horton (left) works in the bullpen before Saturday's games at the 2013 1A state series with assistant coach Derek Barringer. (File Photo) 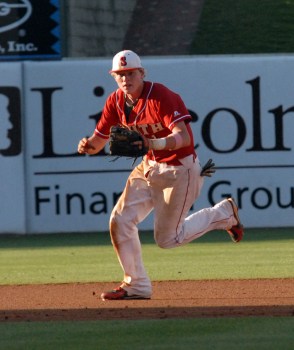 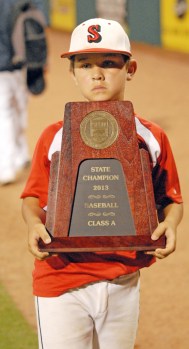 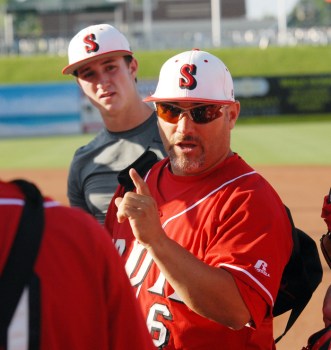 South assistant coach Mark Tucker talks to the team before taking infield at the 2013 1A state finals. (File Photo)

It has been just over a decade since a former West Stanly baseball standout and former Concord High School teacher and coach decided he wanted to come back to his native Stanly County to work with young baseball players.

When he took over as the South Stanly Rowdy Rebel Bulls baseball coach, Terry Tucker transformed the program into a state-level powerhouse, winning three state championships (2009, 2012, 2013) and runners-up in 2011 and 2015. The Bulls reached the state finals series five times in seven seasons.

“I have always enjoyed working with children in the days prior to teaching and coaching. I taught high school age kids in Sunday School for many years,” Tucker said. “I was told many years ago that I should have been a teacher and coach due to my love for kids and their learning and my passion for coaching.”

“The Norwood community has always been rich in baseball ever since I was a kid. It also would afford me to teach and coach my kids once they entered high school,” Tucker said.

The goal the first year and every year since then, Tucker said, has always been three-fold: win the conference, the conference tournament and the state championship.

Tucker said he saw the Bulls play prior to the 2009 season and said he “knew with a little work, we could do great things.”

South finished second in the 1A/2A Rocky River Conference to Mount Pleasant, with the Bulls losing 19-3 in the conference tournament finals to the Tigers.

That loss, the sixth of the season for the Bulls, was also the last as well as South rolled through the playoffs with six wins in a row to reach the state finals series, including a sweep of Cherryville in the regional finals.

Tucker said the stadium was a “big venue,” adding going into the series he “was worried when we first arrived that the setting was so large that it would be overwhelming for our kids.”

However, South’s reaction was “quite the opposite” to playing on a big stage.

“Our kids owned that place,” he said.

Behind the strong pitching arms of Ryne Poplin and Wes Hatley, who both went on to pitch in college at Wingate and Charlotte, respectively, South posted wins of 7-2 and 6-2 over the Pirates to claim the school’s first state championship.

Tucker said “the greatest moments were the ones shared with my brother after the victory,” along with the moments with the parents and kids “that were there.”

Two seasons later, a young South team finished tied for first in the conference regular-season schedule with North Rowan but lost to the Cavaliers in the tournament finals. The loss forced the Bulls to have to go on the road as the No. 3 seed from the Yadkin Valley Conference.

“I told (the team) going into 2011 we knew we were young with no seniors on the team. I told them our goals are still the same. If you believe, good things will happen,” Tucker said.

South won games at Roxboro Community, Elkin, Bishop McGuinness and East Surry, then faced Murphy in the regional finals. The Bulls lost the first game in the mountains 5-4, but won at home the next day 4-2. South secured a spot in the state finals with a 19-8 win two days later at Murphy.

The Bulls won the first game on Friday 3-2, but suffered losses of 5-1 and 9-7 to finish as runners-up to East Columbus, which Tucker said helped build the team’s confidence heading into 2012.

Tucker said the next two seasons for the Bulls “have probably been the best two consecutive years in my 10 years here at South.”

The Bulls were 60-11 thanks to winning the state title both seasons.

“Those two teams had kids that believed and worked very hard in preparing themselves for making their title runs. Those kids were groomed at early ages to compete and own the game,” Tucker said.

South’s coach said some defensive adjustments for the Bulls helped prior to the start of the 2012 season, moving Chase Poplin from second to shortstop, J.P. Lisk to third base from second and Stephen Wallace starting at third.

South reached the most baseball wins in a season in school history in 2012, going 30-4 overall and outscoring teams 265-65, averaging 10.2 runs per game while allowing just 2.5 runs to be scored by the opposition. South hit .362 for the season with 17 home runs and 81 stolen bases, while pitchers like Russ Weiker, Heath Blackmon and Jordan Starnes were a combined 27-3. As a pitching staff, South had a 1.71 earned-run average.

The Bulls won the YVC regular-season and tournament titles and won eight straight games in the playoffs by a combined score of 82-12, claiming the title over Voyager Academy by sweeping both games at the Durham Bulls Athletic Park.

The next season, South matched its win total from the previous season going 30-6 overall and claiming the regular-season title in the YVC. The Bulls rallied from an opening loss in the regional series to Hendersonville, 6-2, then won 12-5 and 5-2 over the Bearcats.

In the finals at New Bridge Bank Park in Greensboro, South took on the Midway Raiders, winning the first game 3-0, but losing the second 16-12. The Bulls won the third game, 14-12, for the school’s third state championship in five seasons.

Tucker said “consistency was probably the biggest attribute to those two seasons. We had great pitching and great hitting. Many of those players from those teams went on to play at the next level.”

Playing in a familiar setting, the Bulls took on a tough Whiteville Wolfpack team in the finals. South lost the opening game 7-0, then forced a deciding third game with a 2-1 win early Saturday afternoon. The Bulls lost the series final to Whiteville, 6-1.

“We had a chance with a break here or there,” Tucker said, noting the same things which happened in the game, especially Whiteville bringing Mackenzie Gore back to pitch the final four innings of the third game after he pitched the first game, would not happen now because of pitch limits.

The word for South’s program over his first 10 seasons, the South coach said, was “consistency,” which Tucker said “comes from building a program that believes any time we step on the field we have a chance to win.”

Tucker said the youth baseball programs in Norwood “contributed great support to that. Now we have a lot of our kids playing travel ball together to compete at a higher level, which helps us a lot.”

“Having good assistant coaches that know the game makes my job a whole lot easier,” Tucker said, adding he moved from the third-base coaching box in 2012 to the dugout so his brother, Mark Tucker, could coach at third while his cousin, Bryan Tucker, coaches first base.

Tucker said the South baseball program has had “great community support from families and friends to have built not only our program but our facilities as well…the dedication of the coaches and community built a baseball program at South Stanly that not only the Norwood community could be proud of, but the entire county.”