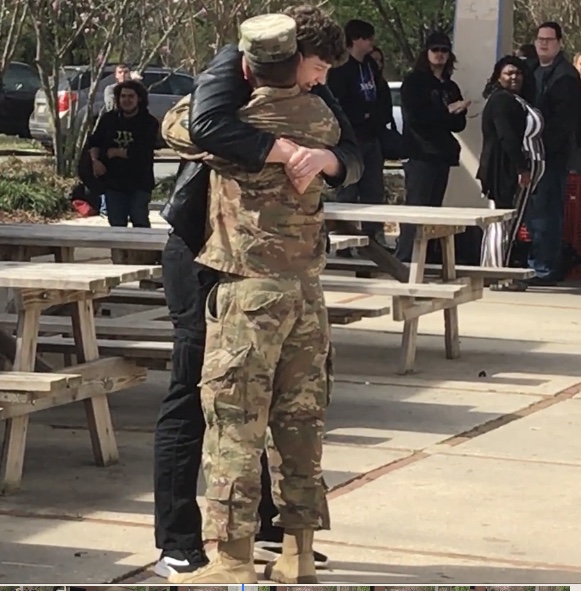 North Stanly student Dylan Chandler is reunited with his father, Army Specialist Stanley Wright, after over a year apart.

North Stanly High School junior Dylan Chandler received the surprise of a lifetime Monday morning as his father, who he hadn’t seen in more than a year, surprised him outside the school during lunch.

Army Specialist Stanley Wright, who was a member of the 155thArmored Brigade Combat Team in Kuwait, gave his son a long, tear-soaked embrace while students and faculty cheered loudly in the background.

“I was very, very shocked,” Chandler said after being reunited with his father. “After a long time, it feels really good to see him in person again.”

The last time the two had seen each other was the end of January last year.

Chandler’s grandmother Cindy Hunter organized the event about a week ago, calling principal Dr. Randy Mann, a Navy veteran himself, to tell him Wright was coming home.

One of Chandler’s good friends, junior Blake Fraley, was informed about the surprise earlier Monday morning and made sure Chandler was eating lunch outside when the big moment occurred.

“It’s a great feeling to know that he’s here and he’s home with Dylan,” Fraley said.

Chandler’s family and friends enjoyed some pizza after the big reveal.

“That’s what I needed,” an emotional Wright said. “That’s home. Wherever Dylan is, that’s my home.”