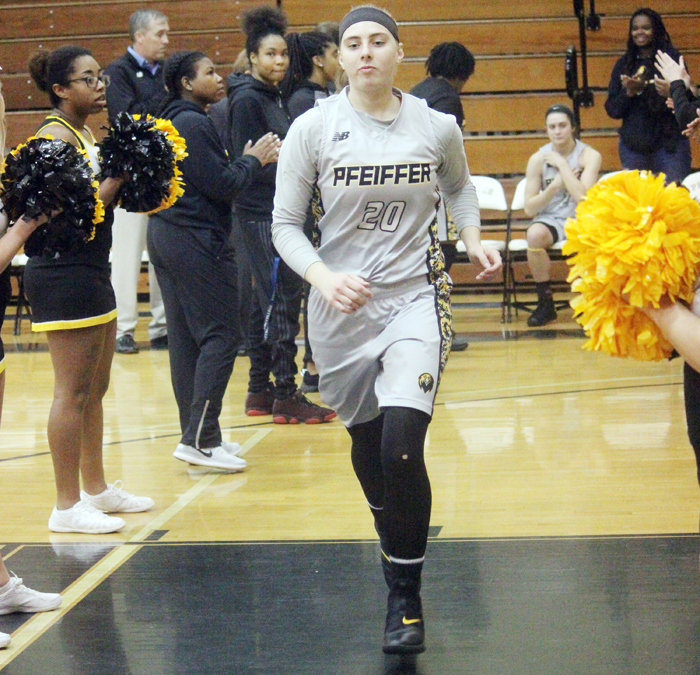 Pfeiffer University junior Kortni Pinion is announced during the starting lineups at a Pfeiffer home game this season. Pinion, whose family lives in Stanfield, played this past season with the Falcons. (Photo by Charles Curcio)

Her path to playing basketball at the next level did not go the same as others, but Stanfield resident Kortni Pinion found her way back to Stanly County.

Having been homeschooled by her family, Kortni, one of eight children to her parents Billy and Julie Pinion, played basketball in her high school age years with the Greater Cabarrus Athletic Association Stallions. GCAA is a faith-based group for homeschooled student-athletes which fields teams in basketball, football, soccer, softball and volleyball in the North Carolina Home Educators Athletic Conference.

Pinion was a standout for GCAA playing softball and volleyball along with her time on the basketball court. She started three years for the Stallions and was named the team’s MVP all three seasons while earning All-NCHEAC honors three times as well. She was the conference’s Player of the Year and Best Defensive Player her senior season, averaging 19 points and 10 rebounds that season. She finished her career with the Stallions having scored 1,380 career points.

In speaking with other athletes who played at a public high school, Pinion said she believed one advantage of playing for the Stallions was the team was more like a family.

“We spent so much time together…we spent a lot of time at baseball games or basketball games before ours,” Pinion said referring to the middle school and JV teams playing games before varsity. “It’s a very different type of atmosphere; very close and very comfortable.”

Being homeschooled, Pinion said, meant she was able to do her school work at her own pace. In her case, she said most mornings she got her schoolwork done and then could focus on practicing sports every afternoon. That differs, she noted, from high school athletes who had to find time doing homework while riding the bus or after games.

“We were able to get all of our work done early, not bring that into the game and be stressed about it,” Pinion said. “I was able to go after doing my school work and shoot around for as long as I wanted.”

Being homeschooled, Pinion said, also helped because it afforded extra time to work on a specific subject if one is having problems, like math. Having a parent as a teacher also meant being able to have extra time with them to work on problems, getting input from online videos to help with various subjects.

“If you’re struggling, you can sit down and learn more at your own pace, whereas in school, it’s kind of like you get left behind if you are not there.”

However, with a house full of seven siblings (Clay, Cole, Kristi, Kerri, Kassi, Kaydi and Kelli), it was not always easy to get individual time.

But having others who played sports during their high school years had advantages as well. Pinion said she was able to get workouts in softball or other sports with her sister. “We were able to work some things out in the yard without having to go and call someone else to meet us,” she explained.

In terms of basketball, some of the toughest battles where her skills in the game developed the most came playing games of 21 at an outside hoop with her siblings.

The schedules the GCAA teams played included a lot of games against tough private schools and other home schooled teams, she said.

Pinion said it’s important to know teams like the Stallions “are going to competitive. They are not just a homeschooled team that’s thrown together some players out there trying to have fun with it. They are there to compete.”

Her recruiting process came largely at tournaments like the East Coast national tournament hosted by Liberty University, where coaches like those at Lynchburg College first saw her.

Her transition into the grind of college was something tough she had to experience, she said, when she first started in college in the 2016-17 season at Lynchburg.

“As a college student, I have to experience all that,” Pinion said about going to classes on a regular schedule. “At first it was kind of difficult but then you get used to it.”

After two years, Pinion decided she wanted to be closer to her home and family, which is why she moved to Pfeiffer. Included in that is her brother, Clay, who is playing his senior season with the Charlotte Stampede baseball team. Pinion also played last summer with the Stanly County Post 76 American Legion baseball squad.

This season with the Falcons, she started 15 out of 22 games averaging 27.6 minutes per game played. She averaged 8.6 points per game and had 107 rebounds along with 14 blocks and 22 steals. She shot 42.8 percent from the field and 79.4 percent at the free-throw line.

The difference this year for Pinion was moving to the five position in the post after being primarily a guard previously at Lynchburg, which “is not my normal position,” she said. “My (offensive) game is mostly one-dribble pull-up (jumpshots).”

This season, Pinion focused more on defense and rebounding, picking up points off the offensive glass and in the hustle game “going baseline to baseline” which she said was “kind of where I made my living this year.”

Pinion plans to return to Pfeiffer for her senior to year to finish her major in Human Services while also playing her final season of eligiblity with the Falcons.

“I’m looking forward to playing with all the returners from this past season because I think we can really grow. I think we will be good.”