A new soul food restaurant opening up in downtown Albemarle 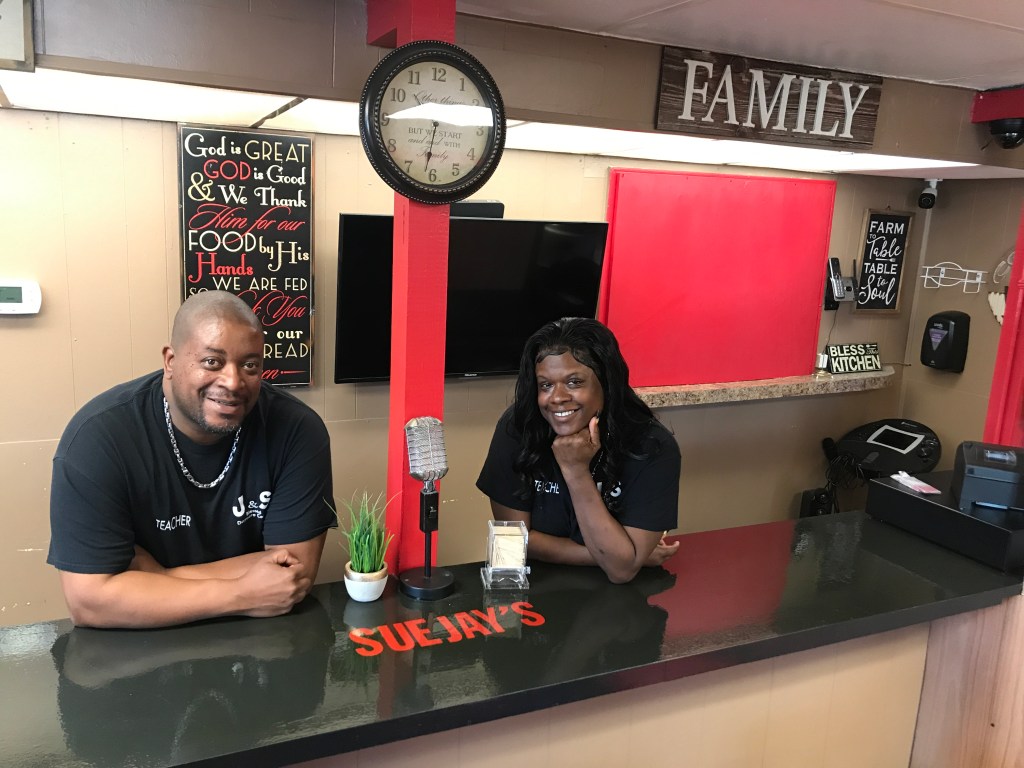 James and Susie Carpenter are excited to open up SueJay's Soul Food restaurant in late April.

A new restaurant — with tons of soul — is coming soon to downtown Albemarle.

Susie and James Carpenter, owners of J & S Blessed Daycare Center, are getting ready to open SueJay’s Soul Food restaurant at the old Burger Bums across from Vac & Dash in late April.

Originally from Philadelphia, Susie and James came to Albemarle in 2000 after spending eight years in Mount Gilead.

The Carpenters came up with the idea of opening a restaurant about two years ago.

Though they had no formal restaurant experience, they often cooked for their church and for daycare functions.

“Another part of our dream was to open up a restaurant,” Susie said.

She said that while the daycare centers are doing well, “in this life, you have to have more than one income coming in.”

Once they discovered the Burger Bums location, they met with the landlord and worked through the details and are in the process of fixing up the place.

The Carpenters took to Facebook to ask people about the name. They wanted people to vote on three names: SueJay’s, The Heart of Soul Food and ACJ (their children’s initials).

The menu will be focused on home-style, southern cooking and will include classic staples such as baked macaroni and cheese, fried chicken, green beans, collard greens, pork chops, catfish, meatloaf and cornbread. Burgers and hot dogs will also be served.

Susie is looking forward to introducing what she calls the Alfonso Special, named after her father, which would be fried hot dogs with lettuce, tomatoes and cheese.

“That’s a good sandwich,” she said.

James also is excited about cooking his mother’s lasagna and his grandmother’s buttermilk biscuits.

There will also be a rotating menu that will be different each day.

SueJay’s will have a crazy food challenge like the ones often featured on shows like “Man vs. Food.” A portion of every item on the menu that day will be offered on a huge plate and if anyone can eat the whole meal, their meal will be free and they will win a T-shirt, a plaque and have their picture hanging in the restaurant for a month.

And, of course, being from Philly, customers will be able to enjoy authentic Philly cheesesteaks.

There are still several steps before the restaurant can open. The Carpenters are in the process of hiring the staff and the health, fire and building inspectors will come in soon for a final inspection.

Their children, Andrew, Calesha and Joanne, who are all in their 20s, will help at the restaurant, Susie said.

The inside of the restaurant looks like a retro diner, with bright red booths and a lunch counter equipped with swiveling red seats. There is seating outside as well.

“We do everything together,” Susie said. “When you see James, you’ll see Susie.”

The restaurant’s environment will be comfortable and inviting, she said.

“I want you to feel like you’re at your kitchen table,” Susie said. “I want it to be pleasant, friendly and loving.”

A plaque that hangs in the restaurant details one of the Carpenters’ mottos: “Always pray to have eyes that see the best in people, a heart that forgives the worst, a mind that forgets the bad, and a soul that never loses faith in God.”

Susie hopes that with the Pfeiffer campus coming soon, the restaurant can attract many young people and provide jobs to some of them as well.

The restaurant’s hours will be 11 a.m. until 9 p.m. Tuesday through Thursday and Sunday and 11 a.m. until 11 p.m. Friday and Saturday.