James Thomas Barrett (Tom), 88, passed away to his heavenly home on Saturday, March 30 with his family by his side.
Tom was born on March 28, 1931 in Midland, NC to the late Samuel Craig and Annie Clark Barrett. He attended Midland Elementary School and finished High School at Bethel in Midland. He married Mildred Kiser Barrett in 1953. 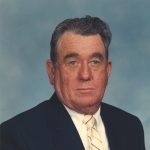 Tom went to work for Mr. O.B. Furr at an early age, it was supposed to be a job for a short time but ended up several years. He then worked for Mr. J.B. Jordan for many years. After that, the Etton plant was for sale, he purchased it and stayed on another 17 years as owner, making a total of 42 years.
When they retired they owned a mountain home where they spent a lot of time, as well as traveling all the 50 states and taking the grandchildren, Katelyn and Zachary with them on some trips.
While traveling they toured England, Ireland, Scotland and Wales. They were lucky in England where they saw the queen in a parade.
Tom is survived by his wife of 65 years, Mildred Barrett. He is also survived by two sons, Mike Barrett (Sheree) of Midland, NC and Eric Barrett (Amy) of Pinetown, NC; grandchildren, Zachary Barrett of Midland, NC, Katelyn Harrison (Nicholas) also of Midland, NC, Emma Barrett and Anna Claire Barrett of Pinetown, NC; sisters Nancy Tucker of Hickory, NC, Earlene Nash of Charlotte, NC and Joe Barrett of Doylestown, PA.
He also has lots of nieces and nephews that he loved a lot.
Special thanks to Tracey Drye and Hospice of Cabarrus County for all the great care they gave him, as well as Golden Hearts Healthcare.
Visitation will be 12:30 p.m. to 2 p.m. Saturday with a memorial service at 2 p.m. at Loves Grove Methodist Church at Stanfield, 4360 Polk Ford Road.
Memorials will be appreciated for the Family Life Center Building Fund, Loves Grove Methodist Church, P.O. Box 276, Stanfield, NC 28163.