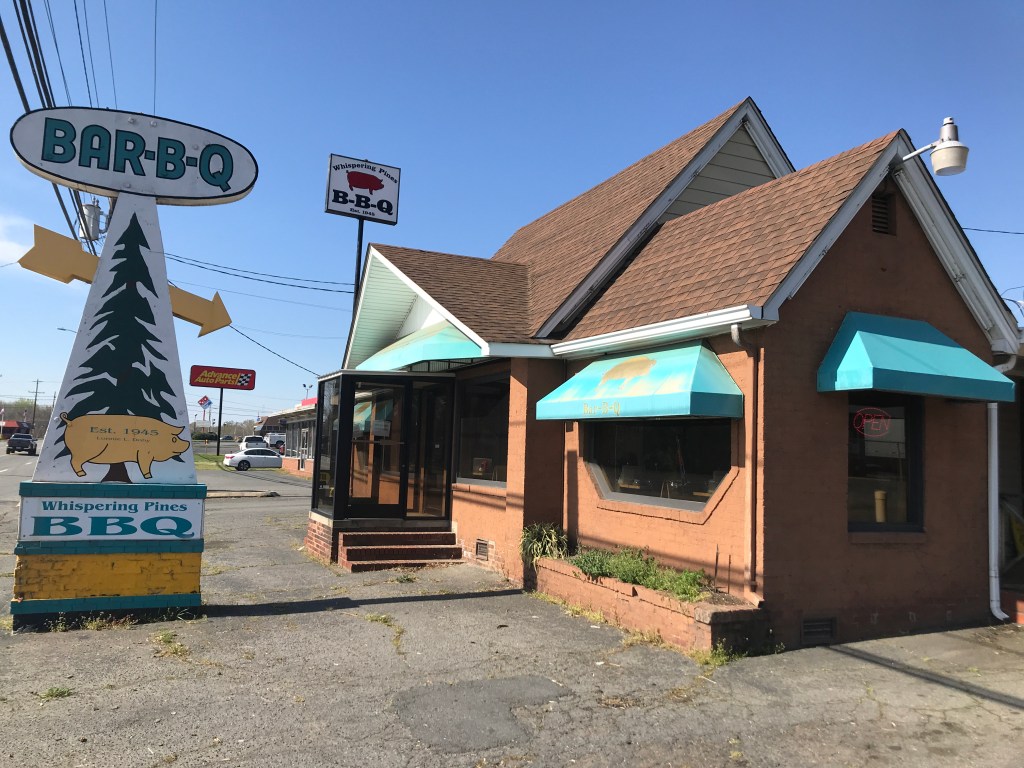 Whispering Pines has been around since 1945.

In North Carolina, barbecue has long been the king cuisine. It’s put many restaurants on the national map and has been featured on many national television shows and in newspapers.

Here in Albemarle, whenever people mention barbecue, they are usually referring to either Log Cabin Bar-B-Que or Whispering Pines B-B-Q, two entrenched barbecue establishments separated by less than two miles — and operated by the same family.

If barbecue is king in North Carolina, then the Galloways must be one of the royal families.

Lonnie Doby opened Whispering Pines in 1945, back when the restaurant wasn’t technically in Albemarle. But it wasn’t until 1953, when Lavada Galloway ate barbecue with a friend after school that the barbecue landscape in Albemarle really began to change.

Doby was busy that day and asked Lavada for assistance. She helped him and eventually the two got married. Lavada worked at the restaurant from 1953 until her death in 2002. Lavada’s sister Edith Galloway (she later married an Almond) also spent time working at Whispering Pines, along with their brother, Darrell Galloway, who was a cook.

Though the family got their start at Whispering Pines, over the years many in the family left to create their own barbecue restaurants.

Richard worked with Lavada at Whispering Pines until he was 18. He also was a cook for several years at Log Cabin.

Richard’s brother Glenn eventually convinced Edith to come back to Albemarle to buy Wink’s Barbecue. They bought the property and in 1991 opened Log Cabin. Edith ran Log Cabin until 2003, when she retired after suffering a brain aneurysm.

After Edith retired, her other son, Keith Almond, and his wife, Kristi, took over as owners. Their son Brad is now the general manager.

Though Log Cabin and Whispering Pines have an intertwining family history, much still separates them — including the cooking methods.

While Whispering Pines still utilizes hickory wood and pits, and depends on fire from the wood to cook the meat, Log Cabin utilizes a more modern approach with a pit, where gas is the main heat source. Wood is burned in a separate container and pumped into the pit to constantly smoke the meat, Brad said.

Log Cabin uses Boston butts and chops the meat with a cleaver, Brad said. Log Cabin cooks about 1,500 pounds of pork a week.

One of Log Cabin’s most popular dishes is the barbecue salad, which features lettuce, red cabbage, carrots, tomatoes, onions and pickles topped with barbecue.

“Most people find the pickles a bit odd on a salad, but once they try it, people love it,” Brad said.

Brad worked at Log Cabin throughout high school with Edith. After he got back from college at the University of North Carolina at Wilmington, he continued working.

“All roads lead back to home,” he said.

Three times a week, Tyler comes in around 4 p.m. and puts the barbecue in the cooker, seasons it with a dry rub and makes sure to put enough wood into the container. The next morning around 6:30 a.m., Tyler dips the sauce on the pork. He sauces the pork four times in 15-minute intervals.

Once the pork is properly sauced, the bones are pulled out of the pork butt and employees pull and chop the pork for customers. 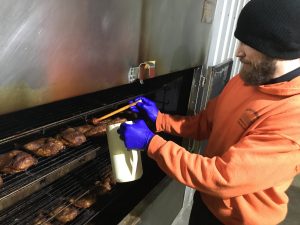 “The restaurant is a family business,” Richard said. “My brothers, we all grew up at Pines and worked there. It was family. We ate there, we worked there and we’re still family.”

Both restaurants are still connected through the bond of family — so much so that one restaurant will often help the other with supplies if it’s running low.

“If he (Neal) needs anything I’m there, and vice versa,” Brad said.

Both restaurants have loyal customers.

Baxter Kirk lives in Albemarle and eats at Log Cabin around twice a week. He’s been going there for at least 20 years.

His favorite meal is the barbecue chicken, but he also likes their hot dog. 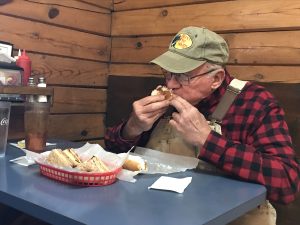 Log Cabin “is the only barbecue I eat in Albemarle,” he said.

He especially loves the staff, the sauce and the pork.

“Nothing makes my mouth water more than getting out of the car and smelling the lingering smell of the day’s freshly smoked barbecue,” Martin said.

Though Martin doesn’t know the exact ingredients in the sauce, “there is just the right blend of spice and tang that brings that well chopped pork to life — on a plate, tray or bun, it is the finishing touch.” 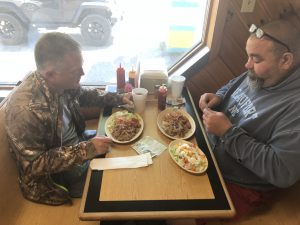 Todd Rummage enjoys his chopped barbecue, while Mike Turner enjoys a salad and his sliced barbecue at Whispering Pines.

Though he can’t remember his exact age when he first came to Whispering Pines, “it’s definitely the first place I ever tasted fountain Cheerwine.”

“The chopped barbecue was what my brother and I targeted for our sandwiches,” he said. “The two of us would debate and ponder among ourselves until we decided to order either a chopped barbecue sandwich or a hand-patted cheeseburger all-the-way, affectionately and deliciously described to us as a bread burger.”