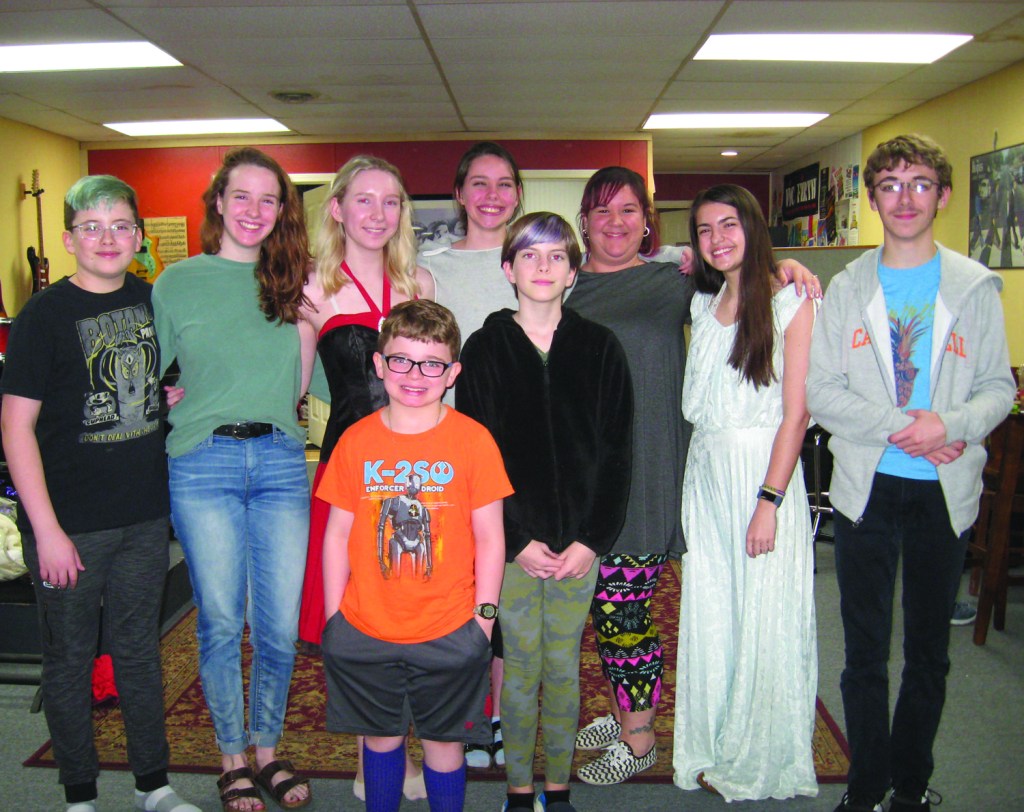 The story follows Queenie, based on the character of a young Queen of Hearts from “Alice in Wonderland.”

Queenie decides she needs a husband — a prince — in order to rule well and sets out on a quest to find one.

Her friends Kitty (based on a young Cheshire Cat) and the White Rabbit help her visit different worlds from fairy tales.

Queenie learns a few lessons along the way.

While all four teens wrote the play, the idea originated with Burris.

The play stops at “nice Queenie” and doesn’t address the less friendly Queen of Hearts “Alice in Wonderland” fans are familiar with.

“We just leave it up to interpretation. Something traumatic happens and she starts cutting off heads,” Burris joked.

There is, however, a quick reference to the adult Queen’s future pasttime in the play.

While Burris was thinking of cats — which inspired Kitty — she ended up getting the lead role of Queenie.

She wasn’t disappointed at all and enjoys playing the young queen.

Burris, Young, Campbell and Dombrowski are at home at Music on Main.

“We pretty much live here,” Dombrowski, who plays Kitty, said.

All are involved in theater and music through Music on Main.

Burris spoke with director Heather Britt to lay out a basic idea of the play, then sent a text to her friends asking for help developing the script. They met at Dunkin Donuts late to work on the play, creating storyboards to frame the tale.

“I think the scene we did the best is when Queen of Hearts is talking with Cinderella (Ella),” Campbell, who plays the Fairy Godmother, said. “It’s when Queenie becomes nice, almost.”

The character is encouraging Ella in that scene.

Each of the writers is also acting in the play.

“All were different roles than we expected,” Young, who plays Ella and Snow White (Snow), said.

All are happy with their roles and trust Britt’s lead.

Britt, a music instructor at Music on Main, is overseeing the eight actors and

Addie Campbell’s twin brother, Mabe, who is providing backstage support and has a line in the play.

Laura Almond is in charge of costuming, while Tim Harris and Michelle Huggins are providing technical support.

Burris, Young, Campbell and Dombrowski all noted how, as the oldest actors in the play, they appreciate they can be role models for the younger actors. The girls said they had the same support when they were younger actors.

The youngest actor is about 8, they said.

“We’re excited that all of our students are involved, firstly, because this is all Music on Main kids,” Britt said, noting that only J.D. Harward was new to the group’s larger theater productions.

“We’re planning to get the script published once we have the show done for the kids so that it will encourage them to continue writing,” Britt said. “They’ve already got some ideas for some other things. So we’re looking forward to that — not only expanding our horizons here at Music on Main, but what the kids are capable of doing. They never cease to amaze us. They’re very dedicated at what they do. It’s never dull.”

Typically, the Partnership hires a company from Charlotte to perform a play, Britt said. Tim Harris spoke with Partnership representatives about having the Main Street Players perform this year.

While the plan included purchasing a script, the teens ended up writing one themselves after Harris asked Burris to help him find a script.

The play will be open to the public at 7 p.m. Friday. The group will perform it again for children through the Partnership at 3 p.m. Sunday.

The performances are free, though donations are appreciated. The play lasts about 45 minutes to an hour.

Both performances will be at the Historic Central Auditorium, 219 E. North St., Albemarle.