“I’m looking forward to another fun festival,” Branch said. “We will have some top notch entertainment with a new flavor this year. Each year the festival continues to grow.” 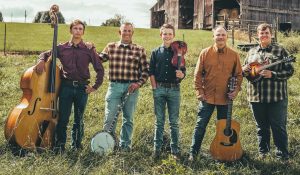 Carson Peters, center and Iron Mountain will open the final day of the festival at noon Saturday. (Contributed)

Peters began playing fiddle at age 3. Since then he has performed at the Grand Ole Opry with Ricky Skaggs, “The Tonight Show” and in the Tennessee State Senate.

“One of the first bands we had was the Lonesome River Band and they will be our headliners this year,” Branch added.

The Lonesome River Band will perform two sets on Saturday. They were the first band to appear at the Oakboro Music Hall (just down the road from the festival grounds) when Branch began booking bluegrass shows in western Stanly County.

“We always enjoy coming down to that part of N.C.,” LRB’s banjo picker and manager, Sammy Shelor of Meadows of Dan, Va. said.

“N.C. crowds are among the most fun crowds we play to anywhere. We miss the Music Hall a lot, so it’s great to get to be involved with this festival.”

New to the festival line-up is the Po’ Ramblin’ Boys from eastern Tennessee.

“We’re really looking forward to making our way to Oakboro for the Big Lick Bluegrass Festival for the first time,” said guitarist Josh Rinkel. “We’ll be there Friday along with our friends, Carolina Blue, and Sideline, which should make for an exciting day.

“There’s no telling what will come of the day when you get all of us together, so you definitely won’t want to miss it,” Rinkel added.

Sideline banjo picker Steve Dilling said he loves playing the festival because it has a “great atmosphere, great sound, and Jeff does a great job providing wonderful entertainment.” 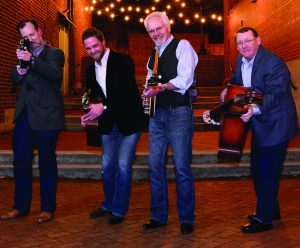 Terry Baucom and the Dukes of Drive perform at 2 p.m. and 8 p.m. Saturday as part of the Big Lick Bluegrass Festival. (Contributed)

Other bands appearing include Terry Baucom and the Dukes of Drive, Lorraine Jordan and Carolina Road, Deeper Shade of Blue and Ron’s Parlor House Band.

The musical event kicks off with an open mic at 6 p.m. Thursday featuring local talent. It continues from 1 p.m. to 11 p.m. Friday and 12 p.m. to 11 p.m. Saturday with professional entertainers.