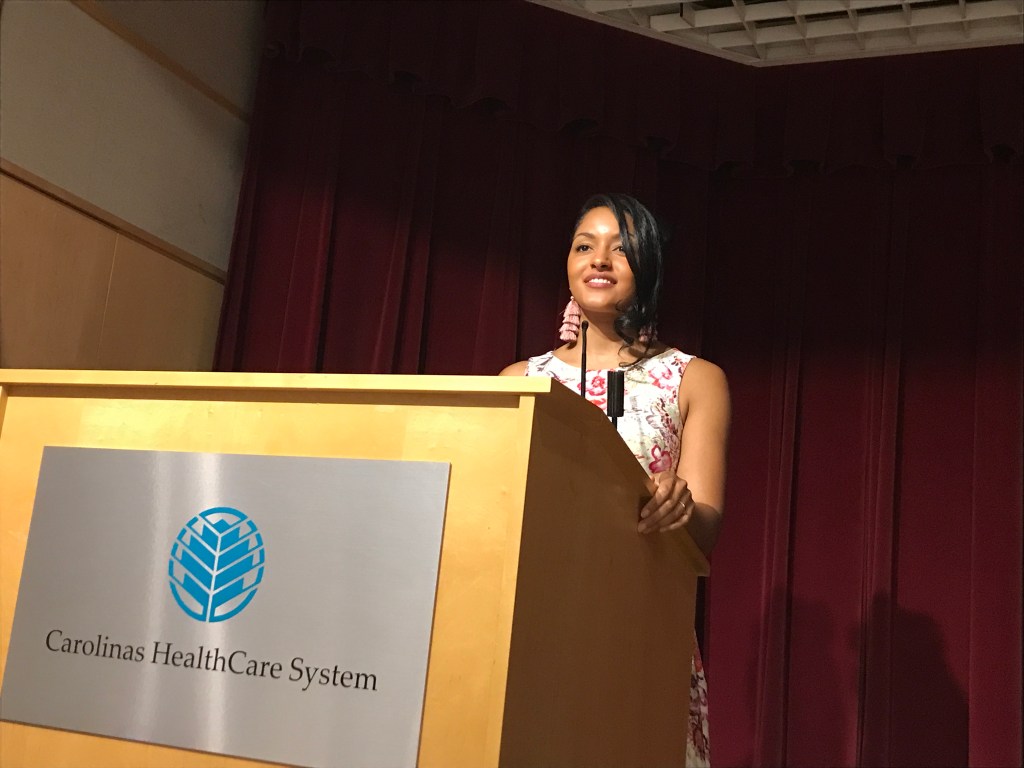 Keynote speaker Rachel Thomas talks about her experiences as a human trafficking survivor.

Rachel Thomas grew up in Pasadena, Calif. and lived a happy childhood with supporting, loving parents, but her life changed when she went to Atlanta for college roughly 15 years ago.

“I was intellectually book smart,” she told attendees at the Butterfly House’s Child Abuse Prevention & Awareness Breakfast Friday, “but there was a lot I didn’t know about the world.”

During her junior year, a modeling agent in a three-piece suit named Mike approached her at a popular college hangout.

He said she was gorgeous and that she had promise as a model. He offered her his business card. She agreed to try out. He helped her land numerous gigs, including a photoshoot and a music video.

To receive payment, Thomas signed a W-9 form during the music video, and she included information such as Social Security number and her permanent home address, which was her parent’s home in Pasadena.

She soon signed a contract to work with Mike for a year.

But she quickly discovered who Mike was.

She watched as he physically abused a young lady that worked for him while they were driving to an industry event.

Shaken up, Thomas called Mike the next day and tried to politely get out of her contract.

There was a long silence and Mike responded with the expletive, “B—-, I own you. You’re going to do what I tell you to do or somebody’s gonna get hurt.”
After that, Mike read off her parent’s home address and told her, “Do you understand?”

Out of fear for herself and her family, she continued to work with Mike, including as a stripper.

“I had never heard of human trafficking,” she said. “I really didn’t even know how evil people could be.”

Mike eventually wanted Thomas to “take care of his friends,” and though she knew what he meant, she started crying and he grabbed her arm tightly.

“You’re going to do what I tell you to do. Don’t make me hurt you,” she said Mike told her.

“Six weeks earlier, I had been a happy, well-adjusted, confident college student,” she said. “Six weeks later, a victim of human trafficking.”

From that night, she said she experienced “every form of psychological abuse, sexual abuse, physical abuse, every form of abuse that you would think of when you think about trafficking.”

Months later, a fellow victim contacted the police and Thomas worked undercover to help the police catch Thomas. As the undercover work became dangerous, Thomas flew back home to her parents.

Despite several moments of silence, she finally told her parents what she had gone through in Atlanta.

The next morning, as she seriously contemplated suicide and even wrote a suicide note, her parents woke her up and embraced her.

Her parents told her that, even though they didn’t know the specifics of what she did, they would always love her.

“I haven’t ruined everything, I’m still lovable,” she said. “It was the show of love and affection and support that gave me a glimmer of hope.”

When Mike was arrested, his face was on the 6 p.m. news and the reporter said that if anyone had any interaction with or information about this man to call the hotline number. In the first hour, Thomas said the news station had 75 calls.

She is one of the lead authors of “Ending the Game,” a 10-lesson intervention curriculum for survivors of sexual exploitation and trafficking.

She opened and ended her speech with the question: “What are we doing to protect our children and help them heal?”

The services that support centers like the Butterfly House perform are important because in the U.S., one in four girls and one in six boys will reportedly experience some form of sexual violence by the time they turn 18, Yow said at a child abuse awareness event earlier this week.

People are already helping to spread support and awareness about child abuse.
Students at East Albemarle Elementary raised more than $200 to donate to the Butterfly House this month in exchange for not having to wear uniforms the last Friday in April.

“We’ve got to fight for these kids,” Yow said, “we have to be the voice … and the biggest thing we have to do is show love.”