After a nearly five-month investigation, the Sheriff’s Office has arrested a man for indecent liberties with a child. 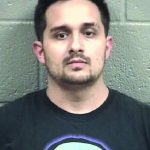 Warrants were issued April 4 for the arrest of James Vincent Fezza after investigations and interviews pertaining to alleged incidents from April 6, 2017 to Sept. 30, 2018.

Fezza turned himself in the next day and was presented before a magistrate. He has been released on bond and is scheduled for District Court Monday in Albemarle.