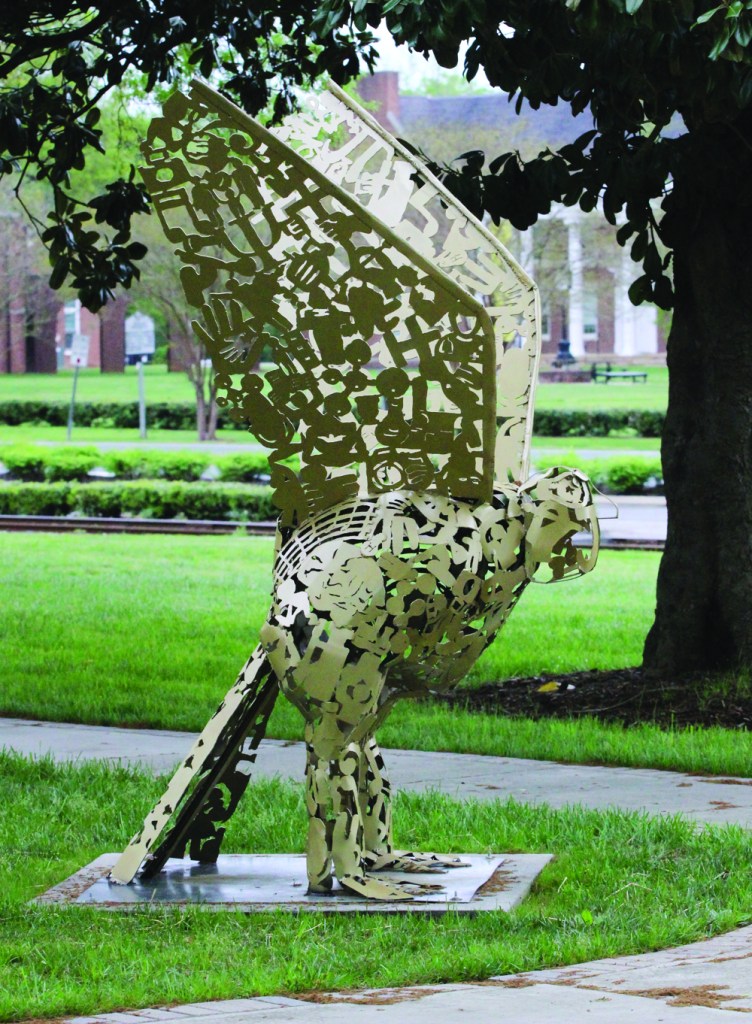 Taking more than 1,000 hours to assemble, this metal sculpture of the mascot of Pfeiffer University now stands outside Harris Hall.

“Taking Flight,” a metal sculpture on Pfeiffer University’s Misenheimer campus, was unveiled last month in a ceremony at Harris Hall.

“Hopefully, this piece will be the start of a cycle of bringing in artists and their works to transform the aesthetic look of our campus,” said Joshua Cross, associate professor of art at Pfeiffer.

“In 2018, our Student Government Association (SGA) and the art program partnered to hold a contest for proposals for an outdoor art piece for the Misenheimer campus,” he added, “and Ash Knight’s proposal was chosen by members of that association as our first commissioned piece.”

Knight, of Charlotte, explained the sculpture’s concept, construction and symbolism.

“This process has taken about one year,” said Knight, who estimated he invested “at least 1,000 hours” in assembling the sculpture, with assistance from Pfeiffer art students Michaela Schwann, Libby Stewart and Cheryl Wise.

“The piece is constructed of 1/8 gauge steel, reinforced with rebar,” he said, explaining that the overall form, that of a falcon (the Pfeiffer mascot), is made up of hundreds of smaller individual steel pieces.

The pieces, symbolic of disciplines offered through the university, including history, science, music, business and education, among others, are interconnected to form the sculpture, according to Knight.

“I decided on three or four symbols for each program, stenciled them by hand, and then cut them out with a tool known as a plasma torch,” said Knight. “After cutting them out, I then pieced and welded them together to form the falcon from all the symbols.”

And, according to Knight, many of the individual smaller pieces tell a story as well.

“For example, music notes within the structure make up the hymn ‘How Great Thou Art,’ ” he said.

In addition to the falcon being Pfeiffer’s mascot, the nature in which the bird is portrayed in the sculpture carries significance as well.

“The falcon is the fastest bird in existence,” Knight said. “And the position of this falcon is that of the bird just before taking off.”

Ron Lafitte, vice president for student affairs at Pfeiffer, spoke of the collaborative process that culminated in the work of art.

“It has been great to work with Josh, with Ash, and with the Pfeiffer SGA on this project, as well as the university’s facilities department,” he said.

Cross expressed optimism for future placement of such sculptures on campus.

“Our hopes are to commission one piece every other year going forward,” he said.

Knight is a visual artist living and working in Charlotte. He is a participant in Charlotte’s inaugural year of the ArtPop program and is an art instructor at Central Piedmont Community College.

He explores the relationship between the mind and body and its power of personal transformation.