Albemarle Police has arrested a man wanted in connection with a string of fires downtown Wednesday morning.

Shortly after midnight Wednesday, Albemarle officers responded to an alarm at 518 N. Second St. where a noticed the building beside Hartsell Funeral Home was on fire.

Officers found a 1997 Jeep Grand Cherokee on fire behind the business and the fire department extinguished that fire as well.

While responding to the fires, an officer spotted a dumpster on fire behind City Hall, 144 N. Second St., and attempted to put the fire out with his fire extinguisher. However, the contents inside the dumpster flared back up and the fire department responded to put out the fire.

It was also noticed someone set the utility pole on fire in the Stanly County Public Library’s parking lot.

Officers and detectives continued to search the areas and were able to talk with many people. 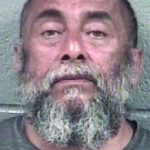 After several interviews and an investigation, Alex Arias, 52, was found to be the person responsible for setting those fires, police said.

The investigation uncovered Arias was responsible for a fire reported at Garmon Mechanical April 5.

He received a $15,000 secured bond. He has a court appearance scheduled for April 29.