Dr. Scott Bullard, a senior college administrator who has served as a professor and an interim president in Alabama, will become the 11th president of Pfeiffer University.

Pfeiffer Board Chairman Bob Brietz announced Bullard’s appointment Thursday following a unanimous vote by the Board of Trustees.

Bullard, 42, is senior vice president and dean at Judson College in Marion, Ala. In March, he completed a 16-month term as its interim president.

“Pfeiffer is so fortunate to have found in Dr. Bullard someone who has proven himself to be a dynamic leader in higher education,” Brietz said. “It’s easy to see how he quickly rose through the ranks at Judson. His intellect, problem-solving skills and understanding of the opportunities and challenges really stand out. He is more than ready to lead our university.” 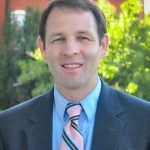 Bullard succeeds Dr. Colleen Perry Keith, who announced in February she is resigning to become president of Goldey-Beacom College in Wilmington, Del. The new president’s first day at Pfeiffer will be June 1.

Bullard said he admires Pfeiffer’s commitment to its students and is eager to become part of that mission.

Pfeiffer “is preparing leaders in health care, business, education, the arts, ministry and many other disciplines,” Bullard said, “and because of the character of Pfeiffer employees, Pfeiffer graduates care most about serving others through their vocations. What an exciting place to serve. I am excited to begin working alongside such capable and engaged colleagues in service of students and a region that I have loved for a long time.”

A North Carolina native, Bullard was born in Lumberton and graduated from Scotland High School in Laurinburg. He holds a Bachelor of Arts in philosophy from Campbell University, a Master of Divinity from Duke University and a Ph.D. in theology from Baylor University.

Bullard served at Duke as a teaching assistant and worked as a development officer for the nonprofit Stop Hunger Now before going on to Baylor. He was also an adjunct professor at two Texas colleges.

Judson is the nation’s fifth-oldest women’s college. It hired Bullard in 2008 to teach religion and serve as co-campus chaplain. He went on to chair the Humanities Division and to lead Judson’s religion department before he was named dean in 2012 and senior vice president in 2015.

In 2010, the college’s graduating seniors voted to honor Bullard with the Lula and Alton Holley Excellence in Classroom Teaching Award. The award goes annually to a faculty member who demonstrates excellence in teaching.

In 2017, Judson’s board of trustees named Bullard interim president when longtime Judson President David Potts took a health-related leave of absence. Potts passed away in March 2018.

Bullard concluded a $20.4 million fundraising campaign begun under Potts’ presidency. During Bullard’s interim presidency, Judson secured more than $5.4 million in gifts and pledges, including multiple donations toward the renovation of Judson’s library and the funding of additional student scholarships.

Judson’s new president, Dr. W. Mark Tew, praised Bullard for his “wisdom and maturity” as a leader, qualities that particularly stood out in discussions about the preparation of the college’s most recent accreditation report.

“Dr. Bullard represented the college very well to boards, donors, and constituents,” Tew said. “It would have been a great honor to work collaboratively with Dr. Bullard here at Judson, but I am confident he will bring the same dedication, insight, and innovation to his new role as president of Pfeiffer.”

Bullard is a published author, with works appearing in a number of academic journals and edited collections. His book, “Re-membering the Body: The Eucharist and Ecclesial Unity,” focuses on the understanding and practice of the Eucharist, or Communion, and was published in 2013.

He is married to Shannon Desmond Bullard, who is a kindergarten teacher. They have four children: Judson, Desmond, Campbell, and Walker. In their free time, the Bullards can often be found outside – hiking, playing soccer and playing with their dog, Harper. Scott Bullard said they look forward to exploring and re-discovering life in the outdoors of North Carolina, especially the Uwharrie Mountains, where Bullard visited many times as a youngster.

The following is a statement from Dr. Bullard about his appointment as President of Pfeiffer University.

“This spring, as I completed an interim presidency at a school that will always hold a special place in my heart, I received a phone call from a trusted friend in higher education in North Carolina who wanted to notify me of Pfeiffer’s need for a president. As I explored the opportunity, I found that Pfeiffer’s mission statement had two clauses that really jumped off the page at me: “transformational undergraduate experiences” and “leadership in professional and graduate programs that fill demonstrated needs.” As a native of North Carolina who has desired to return to the state but who has enjoyed serving a college “filling demonstrated needs” in rural Alabama alongside qualified and service-oriented colleagues, I knew I needed to explore this opportunity deeply. When I arrived on the campus in Misenheimer, I was immediately drawn to the campus’s beauty, but even more so to the students whom the search committee proudly introduced to me. As we ate together, laughed together, and talked about their backgrounds and hopes and dreams together, it was clear to me that their lives were being “transformed” by the Pfeiffer experience, the Pfeiffer faculty and staff. The following day, trips to the new Health Sciences building in Albemarle – which is being built as we speak – and the stunning location in a bustling Charlotte neighborhood, confirmed for me that the Pfeiffer mission statement that I had come to admire is indeed being embodied throughout the region. The institution is preparing leaders in health care, business, education, the arts, ministry, and many other disciplines, and because of the character of Pfeiffer employees, Pfeiffer graduates care most about serving others through their vocations. What an exciting place to serve. I am excited to begin working alongside such capable and engaged colleagues in service of students and a region that I have loved for a long time.”