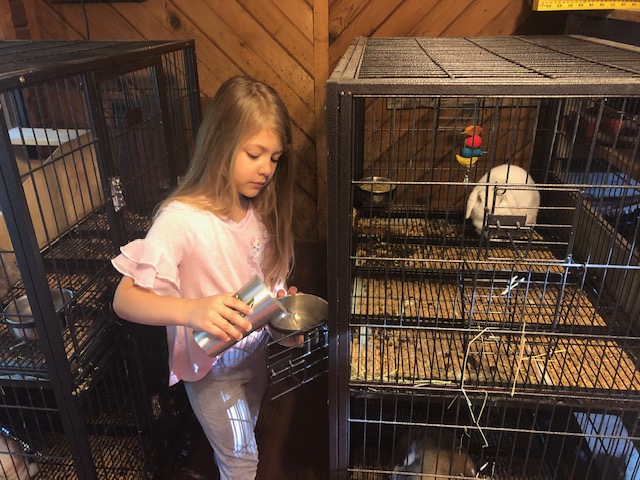 POLKTON — The Easter family runs a farm where they raise many animals, including goats, chickens and, yes, bunnies.

The Easters love their bunnies.

They — along with their daughters Rosie, 5 and Cael, 8 — have about 150 chicks, four bunnies, five cats, five dogs, seven goats, two fish and a horse.

The only thing missing is a partridge in a pear tree.

Molly and Ryan surprised their daughters with the four bunnies — each delivered in a small gift bags — on Christmas.

All the adult animals on the farm have distinctive names.

The bunnies are Maisy (who is pregnant), Daisy, Mr. Biggelsworth (inspired by Dr. Evil’s hairless cat in the “Austin Powers” films) and Mr. Darcy (inspired by the novel “Pride and Prejudice”). 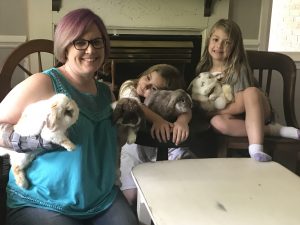 Molly, Cael and Rosie Easter with their four “Easter” bunnies.

Rosie enjoys snuggling with the bunnies while Cael enjoys the fact that “the bunnies like to kiss you all the time.”

The bunnies also get along well with the other animals. Mr. Bigglesworth especially likes one of the cats, named Mickey T.

Molly and Ryan intentionally picked two male and females bunnies to control the breeding. Mr. Darcy will be the father of Maisy’s baby bunnies. The babies will eventually be sold. 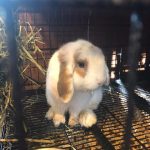 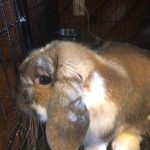 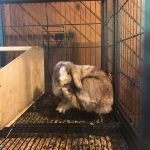 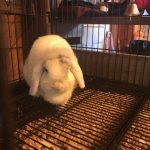 They hope to also breed Daisy with Mr. Bigglesworth.

Molly majored in conservation science at Muskingum University in Ohio and wrote a thesis on genetic diversity, so breeding the bunnies was right up her alley.

“I have been able to put my thesis to good use,” she said.

Molly, who grew up in Mint Hill, has grown up with bunnies, she said.

“They’re very affectionate animals,” Molly said, “and they do bond to you.”

Bunnies can also be trained to go to the bathroom in litter boxes, she added.

The bunnies are Holland Lop rabbits and Molly specifically wanted these bunnies because they don’t grow too big (usually no more than four pounds) and baby Holland Lops are a popular bunny breed.

Both of the females are pedigreed bunnies. In order to keep at least a partial pedigree for the babies, Molly has to know who is the father. This is because a lot of potential customers want to know about the bunnies’ genes and what traits they possess.

They also, rather appropriately, raise Easter Egger chicks, which lay blue, green and even pink eggs. They sell the baby chicks as well. 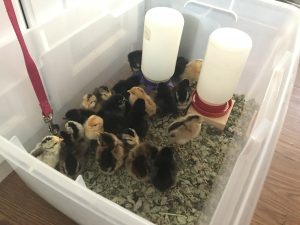 The people at their church jokingly know the Easters as “the family that has way too many animals,” Molly said.

The family has gone on many missions in the Charlotte area, including recently helping to build a youth center for a Charlotte Baptist church.

“You need to help those around your home,” Molly said.

For the family, this clearly applies to the animals.

Though neither Molly nor Ryan were raised on farms, “we both have been very interested in animals our entire lives.”

Rosie and Cael are responsible for feeding and watering all of the animals, Molly said.

“We want them to understand what it’s like for something else to depend on you and to be able to retain that responsibility and actually understand what that means,” Molly said.

The family eats the eggs and they process their own chicken meat.

“We know where all our meat comes from,” she said.

Molly wants her daughters to know where all their food comes from.

They hope to milk their dairy goats and possibly raise meat rabbits.

The Easters are looking to add alpacas and small cows to the farm.

“The more animals we get and take care of, the closer we feel like we get to God’s purpose for us,” Molly said, adding she feels the family was destined to do what it is doing.

“Every time that we add another animal to the farm it’s like, ‘Gosh, are we really going to do this?’ and with the bunnies it was kind of the same thing,” she said.

“And all of a sudden it was like ‘what a marketing ploy, we sell Easter bunnies…Ok, yep we’re doing it,” Molly said with a hearty chuckle.